Saturday Morning Commentary: What A Difference A Couple of Generations Makes

With the following images, I am going to show you how in just a matter of 60 years or so, the essence of a nation can drastically change.


Of course, you recognize the iconic work of American painter, Norman Rockwell.   He created his work in the "golden years" of modern American society, following the war years of 1941-1945.  During the next 30 plus years, he painted the innocence, honor, and pride of the American people.   For "vivid and affectionate portraits of our country," Rockwell received the Presidential Medal of Freedom, the United States of America's highest civilian honor, in 1977.  Clearly, his work represented who we were and what our values represented.

Now take a look at these images:


Yes, the name is the same.....Daisy is Norman Rockwell's granddaughter.  And in her new book, titled The Little Book of Terror, Daisy wanted to render innocent-looking portraits of modern-day terrorists as a way of "dismantling the aura of fear" that surrounds these people; to better understand their actions.  She feels sympathetic to their "plights".
You see, this is how Daisy feels about those who wish to kill innocent American citizens:  "We are supposed to think that those who wish America ill are motivated by evil and to not think any further than that," she told CNN.  "(But America) has spent quite a bit of time meddling in the affairs of other countries.  Whether we like it or not, there are plenty of reasons out there for people to wish us ill as a country."
So, Daisy, who benefitted from an East Coast Liberal Arts education feels that America deserves what she gets?  She really feels that the path each one of her subjects has taken is noble and moral?  How are their actions any different than the "meddling" she so thoroughly despises?
I am not naive enough to think that our Government still holds the high ethical standards on which it was founded.  But we are still the first country that responds to any natural disaster in the world, and the American people are not the American government.  It makes me sad to think that in a blink of history's eye, our own children view us in such a contemptible light.

But perhaps not all is lost!  On February 3, 2010, Google featured Rockwell's iconic image of young love Boy and Girl Gazing at the Moon, on its home page.  The response was so great that day that the Norman Rockwell museum's servers were inundated with hits. 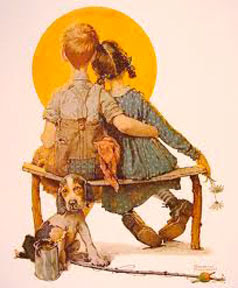 Could it be that, as a society and a nation, we long to return to the days when we celebrated the goodness in America?  Might we reclaim our character and reputation, starting first with a sympathetic image of ourselves?  I pray that Ms. Rockwell will see not only her subjects in a truthful light, but the citizens who have paid the price for her ability to hold whatever views she wants.  Perhaps she should take another look at the titles of her grandfather's paintings in this post and study the reasons he wanted to portray his subjects in such a manner.  She asks us to better understand the terrorists;  I would ask her to better understand who her fellow countrymen are.

Jeremiah 49:16      "The terror you inspire and the pride of your heart have deceived you, you who live in the clefts of the rocks, who occupy the heights of the hill.  Though you build your nest as high as the eagle's, from there I will bring you down," declare the LORD.