"...if my people, who are called by My name, will humble themselves and pray and seek my face and turn from their wicked ways, then I will hear from heaven, and I will forgive their sin and will heal their land.  Now my eyes will be open and my ears attentive to the prayers offered in this place.... But if you turn away and forsake the decrees and commands I have given you and go off to serve other gods and worship them, then I will uproot Israel from my land, which I have given them, and will reject this temple I have consecrated for my Name.  I will make it a byword and an object of ridicule among all peoples."


This passage of Scripture has become a favorite among Christians in America who feel that, as a nation, we need to ask forgiveness for the sins of "our wicked ways".  This passage is a message from God to Solomon, at the time of the dedication of the Temple in Jerusalem.   God tells Solomon He has heard his prayer of consecration and he honors it.  He tells Solomon that His "eyes and ears will be open" to the prayers of the people.  And it is this section of the passage that Americans are clinging to.
But we don't read far enough.  For God goes on to tell Solomon that He will be watching them....if the people of Israel turn away and forsake His decrees and commands, then He will reject the temple He has set aside for Himself and uproot the land.  He will make the land of Israel an example and "an object of ridicule".
So what, you ask, does God's proclamation to Solomon and the land of Israel have to do with America?  Well, it might interest you to know that the Pilgrims identified themselves with the ancient Hebrews and the land of Israel.  They viewed the New World as the Promised Land.  And in 1776, Benjamin Franklin and Thomas Jefferson both wanted Promised Land images for our nation's Great Seal.  In his second inaugural address, Jefferson recalled the Promised Land.  "I shall need...the favor of that Being in whose hands we are, who led our fathers, as Israel of old, from their native land and planted them in a country flowing with all the necessities and comforts of life". 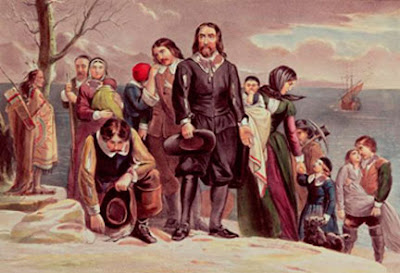 And if that is just too much of a stretch for your imagination, let me ask you to consider this:  Our Founders believed that our country came into existence due to the Divine Providence of God.  And if God can reject a Temple made of stone, and uproot Israel if the people rejected Him and His commands, is it not possible for Him to uproot America and make it "an object of ridicule".  Can you honestly say that we have kept Him sacred in our land?  Have we not abandoned Him in favor of the gods of Wealth, Greed, and Self?
Re-read the Scripture.... there is hope.  If we will humble ourselves (live simpler, more modest lives, respectful of our fellow man); pray (give thanks, ask forgiveness for our transgressions, and request His blessings once again); seek His face (turn back to Him, call out to Him, search for His leadership); and turn from our wicked ways (ridding our schools and institutions of His presence, pornography, sex trafficking, etc.)--- then He will heal our land.
At times I feel we are doomed.  I'm unable to see a turning away of any substance.  But then I remember Abraham's plea to God in regards to punishing Sodom and Gomorrah.  He asked the Lord, "Will you sweep away the righteous with the wicked?"   And God honored Abraham's request to spare the righteous.  I know for a fact that there is a multitude of righteous in our nation, and God hears our prayers.  May He continue to listen to us and bless our land!