I couldn't believe it!  Within 24 hours of writing yesterday's post, I see a proposed list of demands for the Occupy Wall Street Movement.  If you think the winter months dampened their enthusiasm, think again.  They will rise anew in the Spring;  refreshed and rejuvenated.  I invite you to compare the role of the government in yesterday's post (and as stated by our Founders in the Declaration of Independence), and what the 99% feel the government owes them.

Demand One:  Restoration of the "living wage".  Basically, they want to re-impose trade tariffs on all imported goods entering the American market to level the playing field.  Hmmm...OK.....cheap products have been dumped onto the American market....but wait!  They also want another policy to raise the minimum wage to $20 an hour!!  And Small Business is supposed to be able to afford this and still grow the economy???  It's obvious not one of these 99% have ever had to make a payroll.

Demand Two:  Institute a universal single payer healthcare system.  To do this all private insurers must be banned from the healthcare market as their only effect on the health of patients is to take money away from doctors, nurses and hospitals, (preventing them from doing their jobs) and then hand that money over to Wall Street investors.  Here's one of those universal "rights" that was never intended by the Founders! 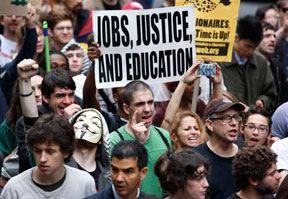 Demand Three:  Guaranteed living wage income regardless of employment.  Thomas Jefferson is rolling over in his grave!

Demand Five:  Begin a fast track process to bring the fossil fuel economy to an end, while at the same time bringing the alternative energy economy up to energy demand.

Demand Seven:  One trillion dollars .... again, in case you missed it, that's a "1" with 12 zeros behind it .... in ecological restoration (planting forests, re-establishing wetlands and the natural flow of river systems, and decommissioning all of America's nuclear power plants).

Demand Nine:  Open borders migration; anyone can travel anywhere to work and live--- there is no national sovereignty.

Demand Ten:  Bring American elections up to international standards of a paper ballot precinct counted and recounted in front of an independent and party observers system.

Demand Eleven:  Immediate across-the-board debt forgiveness for all!  That means forgiveness of sovereign debt, commercial loans, home mortgages, home equity loans, credit card debt, student loans and personal loans now!  All debt must be stricken from "the Books".  That means all debt on the entire planet...period. 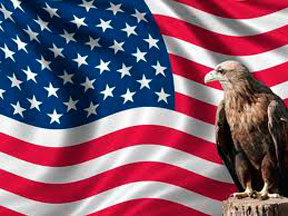 Yada, Yada, Yada..... This is just a partial list of the demands.  And it appears to me that our country has abandoned nearly every Founding principle that existed.  We have truly lost our Soul!  What I see is that we have sacrificed the Honor and Dignity that comes with hard work and achieving goals on our own.  We have replaced it with several generations that have been given everything they wanted, with no responsibilities.  And now the spoiled, bratty child doesn't even know how to accomplish anything anymore.
We must re-awaken the Spirit that lies sleeping in our breast.  It's in our DNA.... I just know it!  Because I fear if we don't rediscover who we are .... a unique people who were born with the fire of Freedom in our lungs .... then we are doomed to become just a footnote in the annals of history.  God Help Us!