Constitution 101: The Declaration of Independence

What we modern Americans fail to comprehend is that the soul of the founding of this country is embodied in the universal political principles of the Declaration of Independence.  These basic principles created the American way of life, and their meaning has been distorted.  It is time that their true significance be restored.
You see, Conservatives of today are uncomfortable with the language of "liberty" and "equality".  They think it leads to 20th Century Liberalism.  And today's Liberals?  Well, they don't much like the Founders' principles, either, but their objection is different.  They don't mind the use of "liberty" and equality"; but they have the meaning all wrong. 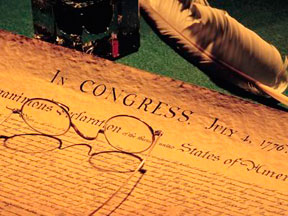 What were the principles that the Founders expressed in the Declaration of Independence that so inspired the adoption of the Constitution?
1)   Man is born with the natural right to Liberty
2)   Government should be instituted by the Consent of the governed
3)   Separation of powers
4)   Government should protect the rights and views of property
5)   Government should protect free markets
Before we get too far into this discussion, it has to be admitted that the Founders did not create a government that was in complete accordance with their own principles.  No doubt about it --- Slavery was in conflict with Principle #1 and what the Founders said government should do, which was to protect everyone's equal rights.  And this is often given as a reason that we should not look back towards the Founders for guiding principles of our modern form of government.
But we also have to admit that Slavery existed when this country was founded.  The Founders "inherited" this abhorrent policy from the British colonial system, AND they knew it was wrong, AND proclaimed it over and over AND tried to get rid of it.  In 1776, every state had legalized slavery, but by the early 1800's, eight of the original 13 colonies had abolished it.  The ratification of the Constitution, as well as the new nation, was in such a fragile state, that if the Founders had pushed the slavery issue, the Republic would have collapsed.  So the Founders "kicked the can down the road" for about 80 years, when it was finally solved after the War Between the States.
But before we go any further, it should be recognized that the issue of Slavery was acknowledged, but the Founders were unsuccessful in solving the problem at the beginning.  Their principles weren't wrong, they just weren't able to convince everyone to live up to them.
So what are those principles that are such a part of the Declaration of Independence?  We are all familiar with the key terms.... equality .... created equal .... life, liberty and the pursuit of happiness.... consent of the governed.  We hear them so often, we no longer know what they mean.  Why?  Because these words have been co-opted and given new meaning. 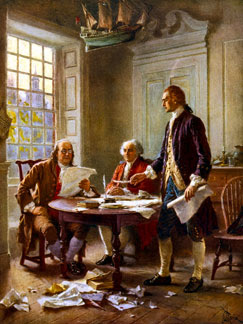 Equality - Today it means that every person should have the same resources as everyone else; at least by the United Nation's definition:  "every person should enjoy the economic, social, and cultural rights indispensable for the dignity and free development of the personality."  This is so far from the intended meaning as understood by the Founders!  To them, Equality was not a product of law or social construction or government policy; Equality is something human beings are born with.... we are all equally free and independent.  What it doesn't mean is that all people have equal access to the good things of life; people don't have a natural right to health care, minimum wages, or an education.
Liberty - Today this term means if you can't afford to pay for something that is a right (as health care is now being labeled), then you are being denied that right and the government needs to give you money so you can exercise that right.  But the Founders had a completely different use for the word Liberty.  To them, the right to Liberty meant that a person has a fundamental right to be free of coercive influence or interference by others.  Liberty was not a right to demand money or services from others except if you were completely destitute with no one to care for you.  They were not inhumane; they believed that every person has a basic right to minimal welfare and the government should contribute to that welfare if you were impoverished.  BUT, at the founding of this country, family and self-reliance made it very rare that anyone needed such assistance.  My, how times have changed!
Perhaps the biggest change that has eroded our country's principles is that we've lost the concept that  the Government should have a moral basis.  It was stated in the Virginia Bill of Rights (which heavily influenced the writing of the Declaration of Independence), "No free government can be preserved to any people but by a firm adherence to justice, moderation, temperance, frugality, virtue, and frequent recurrences to our fundamental principles."   AMEN!  And I dare say, if you go down that noble checklist, we as a country, are sadly lacking.  We have not lived up to these Founding Principles. But the people themselves are supposed to play a vital role in protecting their rights.  We were to be educated in "religion, morality, and knowledge."  We've really dropped the ball there, too, haven't we? 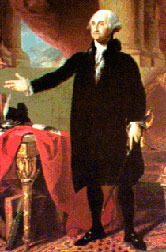 When did we start to get so far off track?  How did we go from George Washington's declaration to the Hebrew congregation in Newport, R.I., "Everyone shall sit in safety under his own vine and fig tree, and there shall be none to make him afraid,"  to FDR calling for a second Bill of Rights which would include:  1) the right to earn enough for adequate food, clothing and recreation;  2) the right of every family to a decent home;  3) the right to adequate health care;  4) the right to a good education; and many more.   FDR fundamentally believed that if the government fails to fund the right, you don't really have the right.  And since the government has no way to make money, it must compel (or coerce, by the Founders standards) those that have talent, a work ethic, and inspiration to provide for those who are unwilling to provide for themselves.  We have created a culture of victims, and the more one is identified as a victim, the more rights you are due from others.
I don't know about you, but it seems to me that we have gotten so far away from where we started, that I'm not sure we can find our way back.   How do we get back to the principle of "Natural" equality? .... "We hold these truths to be self-evident, that all men are created equal, that they are endowed by their Creator with certain unalienable Rights, that among these are Life, Liberty, and the pursuit of Happiness"....
We must raise a generation of people who are educated on the original principles of our Founding and who will restore the true meaning the Founders' words.  And we must do it before it is too late!  We must realize that the Declaration of Independence and modern Progressivism are fundamentally opposed to each other.  The modern misunderstanding of "equality" and "liberty" threaten not just the Declaration of Independence, but the essence of our American constitutional and moral union.  My prayer is that the rest of the world could look to us and say.......

Deuteronomy 4:6       "Observe them carefully, for this will show your wisdom and understanding to the nations, who will hear about all these decrees and say, 'Surely this great nation is a wise and understanding people.' "