I am pleased to recommend the Enemies trilogy, a series of books by ex-Navy Seal Matthew Bracken, who happens to be a friend of myself and my Peace-Loving Warrior husband.  These fictional books are straight out of the headlines.  They speak to current issues that are on everyone's mind in the turbulence of today's world.
Enemies Foreign and Domestic is a novel about the true meaning of loyalty and the high cost of freedom in the age of terror.  The hero of the novel is a woman and she does much to stand up against a fictional assault on our Second Amendment gun rights that doesn't seem too far from reality. 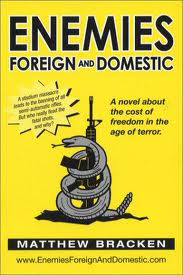 Domestic Enemies:  The Reconquista is a novel about the deconstruction of the American national identity and the loss of the Southwest.  With the Immigration issues we are facing in this country and the chaos on the Border, this book seems frighteningly prophetic.
Foreign Enemies and Traitors is a novel about defending the Constitution during a dirty civil war and the Greater Depression.  Sound familiar?  Now you might think that this author is smart enough to write about current events from today's important news items, but here's the amazing thing.....the first novel was written in 2003!  The second and third novels were written in 2006 and 2009, respectively.  So I think it's safe to say that our friend, Mr. Bracken, has tremendous insight to the cancer that is spreading throughout our nation.
He has bravely served his country and no doubt, witnessed and heard much to influence his story lines.  My husband and I read these novels a couple of years ago and were astonished at the accuracy with which he predicted what we see on the American landscape today.
BUT HERE'S THE GOOD NEWS AND THE REASON FOR TODAY'S POST!  Today, March 1st, you can order the first novel, Enemies Foreign and Domestic for FREE ON KINDLE!  For the next 5 days, this amazing novel can be purchased at no cost, and I promise you that you won't be able to put it down.  Besides being able to read about a powerful and believable heroine, it will open your eyes to just how quick we could lose our Second Amendment Rights.  It's almost as if you are seeing the handwriting on the wall.
So what are you waiting for?  Go to Amazon this minute and order your free copy of Enemies Foreign and Domestic.  And silence your phone, because you won't want to be disturbed for the next couple of days!

Numbers 10:9     "When you go into battle in your own land against an enemy who is oppressing you, sound a blast on the trumpets.  Then you will be remembered by the LORD your God and rescued from your enemies."
Posted by Pam Kohler at 7:00 AM