Personal Protection That Makes A Point

Although I have a Concealed Carry License, the last thing I ever want to have to use to protect myself is my firearm.  If there is another way to extricate myself from a threatening situation, I'm all for it!  I would rather use any alternative than pulling my handgun; whether it be pepper spray, an ear-shattering whistle that raises an alarm, or just having my wits about me to get the hell out of there!  And now I have another weapon to add to my arsenal....the Hinderer Tactical Pen.
Rick Hinderer is a master knife maker and an artist.  He was originally known for his beautiful art knives, but now Rick is a huge presence on the tactical scene.  His knives are still a work of art, but they are more that---they are, in the words of my husband, "damn near indestructible."
And knives aren't his only passion.  In his other life, Rick was an EMT/Fire Fighter and began his journey of designing tactical tools from the experience he gained as a first responder.  Designed with police, EMTs and the Military in mind, his products are pleasing to the eye and extremely functional. Please check out his website. 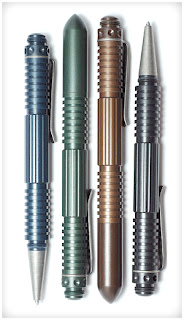 But today I want to concentrate on one of his tools that I personally own---the Extreme Duty Aluminum pen.  When my husband first presented it to me I thought, "Wow, this is a real sturdy pen; I like the design and it feels good in my hand."  Then he showed me its dual purpose:  built as both a pen and a kubaton (a high-impact rod designed to strike bony surfaces, nerve points or tissue), it has the ability to cause temporary paralysis or extreme pain to the attacker, thereby allowing an individual more time to escape a possible attack.
My Hinderer pen is made of aircraft grade aluminum, with Military Type 3 Hardcoat Anodizing for durability.  Translation:  it can do some damage!  There are a variety of end attachments and the one I own is called the Bullet.  It looks like a .50 caliber muzzle loader bullet and it works great as both a striking tool and a compliance technique (think pressing it with considerable force against any soft tissue area of the body).
The nice thing about this tool is that it can be customized to fit any function or method of defense that the user needs.  The pens are well worth the $60 they cost, and you get the most bang for your buck by buying the Modular Kubaton Deluxe Set, which includes the kubaton body with the pen attachment, two end attachments of your choice, the pocket clip and the 550 cord for the Koppo stick option (a martial arts technique that attaches the kubaton rod to your hand, making it an effective weapon)---the Deluxe Set costs $125.
The end attachments offer diverse attributes, from the Long Strike Bezel (a "DNA Scraper") to the Warhead (the sharp point takes my Bullet end to a whole new realm of pain).  But the bottom line is that this tactical pen offers you a non-lethal alternative to carrying a firearm and provides you with another layer of protection.
The quality of the product, the functionality, and the effectiveness make it an obvious choice for your self-defense arsenal.  It's something you can keep on you at all times and it's affordable.  Now signing your name, or "leaving your mark" takes on a whole new meaning!


Philippians 3:15    (Following Paul's example)  All of us, then, who are mature should take such a view of things.  And if on some point you think differently, that too God will make clear to you."