One of my favorite podcasts recently ran an article titled, 8 Personal Finance Lessons from Benjamin Franklin.  The article, written by Brett and Kate McKay, relates Mr. Franklin's timeless wisdom and how it pertains to us.  From over 230 years ago, old Ben gives us very relevant advice on modern survivalism. This post will serve to give you a synopsis of the article, and I urge you to read it in its entirety.
As the authors state, Benjamin Franklin began his adult life as a 17-year-old runaway, and became a successful printer, newspaperman, author, inventor, diplomat and statesman.  Without question, he was a huge factor in the success of our infant nation.  All his life, he followed a regimen of frugality and hard work, and he has left us with enduring knowledge.  So let's get started: 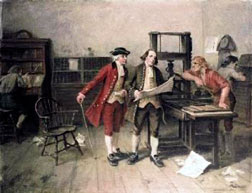 1.  Understand the True Value of Things
As a child, Franklin fell for the temptation of "instant gratification", as so many in our current culture do.  He coveted the whistle of a playmate, and offered all the money in his pockets for it.  His delight was short-lived when it was pointed out to him that he had paid over four times what it was worth.  He never forgot that lesson.  In his own words, "As I grew up, came into the world, and observed the actions of men, I thought I met with many, very many, who gave too much for the whistle."  Our lesson:  Be very careful what you value; whether it is popularity, wealth, superficial possessions, or surface beauty, you can pay too much for temporary fulfillment.  I'm afraid we will come to know, all to well, just how much "things" are worth in the near future.  It will be better to value skills and tools for survival, than the shallow things that "shine".
2.  Be Self-Sufficient
Coming from modest means, Franklin did not live a life of indulgence or luxury.  He had to work, and he experienced, at a young age, a variety of different crafts.  He soon learned that there was satisfaction in being able to do for himself, and it resulted in pride and happiness.  He also realized that being self-sufficient also gave him a certain amount of freedom to make his own decisions, not having to rely on others for his prosperity.  Our lesson: In our future, self-sufficiency will be worth more than gold.
3.  Invest in yourself
Franklin invested in himself by becoming a voracious reader.  He quickly learned that gaining knowledge would allow him to create a future for himself; studying areas that would result in a return of money or time.  Because he wisely invested in himself, instead of luxury items, he was able to become a writer, scientist and diplomat.  Our lesson: You are only limited by how much you're willing to invest in yourself.  And investing now will pay off in untold benefits in the near future.
4.  Surround Yourself with Friends Who Share Your Values
Franklin's thoughts on this subject are similar to my post of February 8th, titled "Like-Minded is The Key".  He learned through making wrong choices, that it doesn't pay to hang out with folks who don't share your goals, values and objectives.  Our lesson:  This is going to become even more important as we progress towards ever-growing economic, social and political problems.  Know who your friends are, and who has your back! 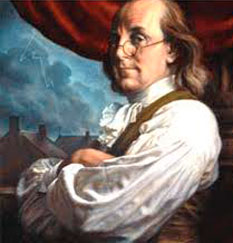 5.  Don't Compromise Your Integrity For Money
Franklin was never willing to prostitute himself for the sake of "filthy lucre", as he put it.   Trust is going to become a mighty important issue in our future, and I'm afraid, a scarce one.   Our lesson:  A reputation of Trustworthiness will be a valuable asset.  You can't buy it with all the money in the world!
6.  Steady Diligence Is the Way to Wealth
"Get-rich-quick schemes" were not part of Franklin's approach to becoming prosperous.  His was not an overnight success; he gained whatever wealth he had through steady, patient efforts, and encouraged others to follow his example.  He lived frugally and worked hard---a strategy that our culture needs to reacquaint ourselves with.  Our lesson:  Wealth may become a forgotten word in the near future, and we would do well to become satisfied with a hard day's work as our reward.
7.  Time Is Money
I was surprised to find that Franklin was the first to publicize this famous quote.   Today, Occupy Wall Street might label you a greedy capitalist for  promoting this thought, but it is true.  "Waste not, want not" comes to mind.  Our lesson:  If you're willing to put in the time, you will make the money!  And if we end up in a cashless society, then our time will truly be the way we measure our worth.
8.  The Accumulation of Money Is a Means to an End
Franklin did not believe in the accumulation of wealth for the sake of living a life of luxury.  On the contrary, he felt that if one worked hard, saved and was able to accumulate a goodly sum, free of worry about paying for the necessities of life, it would free one to become a better citizen.  One would be able to serve others and one's country, which he believed, was the best way to serve God.  While still in his early forties, he wrote to his mother, that after his death he'd rather people say "he lived useful," than "he died rich."  Our lesson:  At this time in our history, any accumulation of wealth would best be put to use by helping ourselves, our families, and our neighbors prepare for an uncertain future.  And that, I agree with Franklin, would be the best way to serve God.


1 Peter 5:2    "Be shepherds of God's flock that is under your care, watching over them---not because you must, but because you are willing, as God wants you to be; not pursuing dishonest gain, but eager to serve;
Posted by Pam Kohler at 7:00 AM