I don't think anyone would disagree that the American family has had to struggle in the last few years.  Between higher gas prices, unemployment, and the weakening dollar, everyone is tightening their belt.  So imagine the surprise of a Minnesota man when he was arrested for failure to properly put up siding on his house.
It seems that back in 2007,  Mitch and Jean Faber found themselves unable to complete the stucco and decorative rock project on their home when their money became tight during the economic downturn.  "We were in the process of finishing," Mitch insisted.  "This wasn't something that we were trying to avoid."  After warning letters to comply with the code in 2007, 2009 and 2010, Faber was ordered to appear in court. 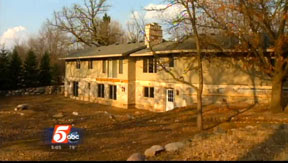 "I was expecting maybe a $700 fine," Faber said.  Instead he was given an ultimatum--- finish the siding or go to jail.  So Mitch and his wife spent about $12,000 putting a stucco facade over the plywood exterior, thinking this would put them in compliance.  But for the leaders of his Burnsville, Minnesota community, it was not enough.
A warrant was issued for his arrest when Burnsville inspectors ruled that the work was still not satisfactorily completed.  The finished stucco siding matched the color of his design; he just couldn't afford the rock work....who could in this economy?  He was stopped on a routine traffic stop and arrested.  He spent two humiliating days in jail.  "I'm walking around in a green and white jump suit, I had to shower in front of a sheriff, I was shackled, my wrists were handcuffed to my waist.....".  And all this for siding??? 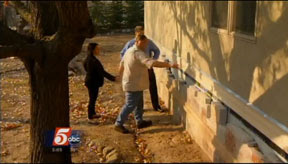 My question is this?  Where are the other members of his community?  Are they speaking up, or are they afraid to stand up to the authorities?  Let me make myself clear, I am not for disregarding laws and authority, but when the law passes all reason, then is it not our duty to speak up?  Mr. Faber did the best he could --- what he could afford --- to meet the codes in his community.  What happened to reason in this case?
Let us contemplate this statement by George Washington:  "Government is not reason; it is not eloquence.  It is force.  And force, like fire, is a dangerous servant and a fearful master."
And Government is good at passing the buck.  The County Prosecutor alleges he has no jurisdiction over city prosecutors; and the district court judge, who heard the case and made the decisions pertaining to it, is employed by the state, not the County.  So no one in local government is willing to stand up for the rights of this citizen.
What has been the aftermath of this case?  While others in his neighborhood go unpunished for more glaring code violations than his own, this seemingly selective enforcement has resulted in Mitch's release and requirement to submit to electronic home monitoring.  In his county, that process requires participants -- no matter what their crimes -- to blow into a drug and alcohol device every time an alarm goes off.   "They can call me at 2 in the morning, and they did," Faber said.
So what can we take away from this incident?  Besides wasting the city's money, the county's money, the Fabers' money; not to mention the mental and emotional anguish of the Fabers, what is the lesson learned?  For me, I think it is imperative that we be vigilant over our elected local officials.  Know your County Prosecutor, your City Sheriff, even who is running for Dog-Catcher; and know what they stand for.  Make sure they put the preservation of liberty and the rights of citizens above the power of Government.  And those District Judges; the ones nobody ever votes for because they don't know anything about them?  It's time we make it our business to know everything about them.  How do they view the Constitution and their role in upholding it?  What is their past record in regards to citizen's rights?  We may no longer have much control over what goes on in the halls of Congress, but we can be attentive to how our local government protects our liberties.  In the words of James Madison,  "The citizens of the U.S. are responsible for the greatest trust ever confided to a political society."  Are you ready to become a responsible citizen?

2 Chronicles 1:10     "Give me wisdom and knowledge, that I may lead this people, for who is able to govern this great people of yours?"