"Like-Minded" is the Key

Last night, I accompanied my husband on a little expedition at dusk.  And what I learned was way beyond some lessons in how to hunt varmints.
We have an infestation of coyotes and wild hogs where we live.  The coyotes hammer our deer population, and the hogs devastate the land, rooting and leaving huge craters in the earth.   So we dressed in camo and I was the keeper of the electronic game caller, while my Peace-Loving Warrior carried the weapon which would hopefully dispatch the unwanted and troublesome intruders.
We sat at the base of a rotted-out tree and settled in.  I hit the button for a distressed kid goat.  We stealthily scanned the horizon for any movement....nothing for over 5 minutes.  But when I switched to the bleating fawn, we quickly saw motion in the corner of the pasture, where an opening in the fence led down to a creek bottom.  Before long there were two, then four, then eight, then up to 13 deer congregated in the corner.  Their heads were up, their ears alert and their eyes scanning the ground before them.  They slowly advanced as a group; cautious and vigilant for any danger directed at them. 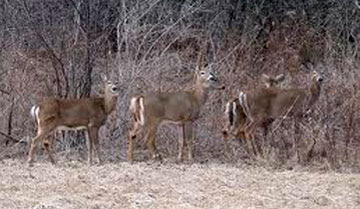 It was interesting and informative to watch.  They moved as a band, one or two out front as scouts, then others moving up and out to replace them----always advancing slowly towards their target, (the sound machine placed in the middle of the pasture).  Their alertness and attention to all that was going on around them impressed me.  Once they determined that the perceived danger didn't exist, they moved out as one cohesive body and regrouped on the other side of the field, still watchful and observant.  They moved again past the pesky machine and finally decided there was no threat, and left the field to regain their cover.
And that's when the light bulb went on in my head!  As we perceive the dangers to our freedoms, we, too, must come together with like-minded people and work together as a cohesive group to discern the dangers and pitfalls.  Some of us need to be out front as scouts and watchmen, ready to sound the alarm to those who believe the same as we do.  And we need to work side by side to determine what our plan will be.  And if no danger is detected, then we continue to support our goal --- our mutual survival.  But if the peril does prove to be real, the only way we will survive it is to come together with others who value the same principles, truths and tenets that guide us.  We need to pool our resources, our minds and our moral convictions to stand for what we believe in.  Only then can we avoid the deception of the enemy.