Where Did The Money Go?


If you are like me, you learned a new word this past week.... re-hypothecation.  Being curious about what seemed to have so many people riled up over the MF Global bankruptcy and scandal, I decided to educate myself.  I am not informed about, or quick to grasp, economic principles, so forgive me, if my explanation seems over-simplified or rudimentary.  I'm just an ordinary woman who is trying to enlighten herself.
An article by Ben Walsh of the Business Insider was really helpful in clearing away some of the confusion.  So let me see if I can re-state the situation in terms we all can understand.  Hypothecation is a technical term that describes the practice where a borrower pledges collateral to secure a debt.  For example, you go to Bank A to borrow money to buy a car.  You retain ownership of the collateral (car), but it is "hypothetically" controlled by Bank A, in that they can seize the car if you default on your loan.  Re-hypothecation is a practice that occurs principally in the financial markets, where a Bank A, or other broker-dealers, reuse the collateral pledged by their clients (you) as collateral for their own borrowing from Bank B to cover their losses.  Bank B can then reuse the same collateral (your car) to borrow from Bank C, if their balance sheet doesn't add up.  A problem can ensue when Bank C decides to collect on that collateral, because Bank B or Bank A has defaulted on their loan.  In effect, Bank C can come take possession of your car, even if you are current on your loan.  It sounds kind of like a shell game to me!
MF Global was a derivatives and futures broker, but also had clients who had invested lots of money in commodity trades.  It is speculated that the counterparties who had funded MF Global's complex trades most likely demanded increased collateral, and MF Global used their clients' funds, which were supposed to be segregated and kept separate, to meet that collateral demand.  In other words, customers lost money from their private accounts, and it is alleged that those funds were used to meet MF Global's margin calls.  RESULT:  MF Global files bankruptcy at the end of October 2011 and an estimated $1.2 Billion in client money is missing! 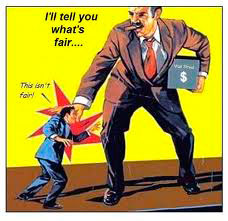 And the explanation by former MF Global Chairman and CEO Jon Corzine, former President and COO Bradley Abelow, and former CFO Henri Steenkamp..... "We don't know where the money went."  And they expect us to believe that????
Besides individual investors losing funds, many farmers, ranchers, and small business owners lost money that was deposited with the firm.  Agricultural businesses use brokerage firms like MF Global to help reduce their risks in an industry that is vulnerable to swings in the price of oil, corn, or other commodities.  Now they have no money to cover expenses for next year's business.  These farmers and small businesses felt they had their bases covered for next year's crop or expenses.  Now many of them will be forced to file bankruptcy, too!  And I don't have to tell you what that will do to food prices!!!
Congress is investigating, but so far no one is 'fessing up.  It's just one more example of the decay in our society; truthfulness and honesty are no longer among our abiding moral principles. Why don't we call it what it is?  At best.... it's corruption; At worst.... it's theft!