My Favorite Video of the Week 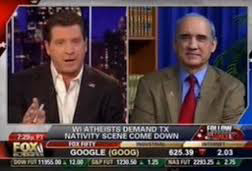 This week on Fox Business Network's Follow the Money, host Eric Bolling participated in a lively discussion with a spokesman for the Wisconsin-based group of Atheists called Freedom From Religion Foundation.  The group takes offense against a small Texas town, and their display of the Nativity scene on public property, presumably on the Courthouse lawn.
The spokesman for the Atheist group, Dan Barker, began by stating, "America is a diverse country, and it (this manger scene) is not appropriate to display at the seat of government."  He continued, "Why would they want to put up an exclusive, discriminatory, and insulting image.... it is insulting to human nature that we are all doomed and damned ..."
Bolling then interrupted, and said, "It's not insulting to me.  I'm a Christian."
Barker continued, "Why was Jesus born?  To save us from our sins?  How would you feel if you didn't believe that mythology and superstition?  What an insult that we are depraved and degraded human beings.  He (Jesus) created a hell, a place of torture..."
At that point, Bolling had had enough.  "I can't allow you to talk like that on my show.  You, sir, are denigrating the name of Jesus Christ.  I'm not going to let that happen."  Uh, bye-bye.  With that, Bolling stopped the interview and the vitriolic hate speech of this poor deluded man.
Good job, Eric!  Christians - 1, Atheists - 0!