My Story of the Week


Santa Claus has always been known as a jolly old soul to all who love him.  This week he became a Good Samaritan Hero in Dallas County, Texas.  Every year, Brad Luddeke, a volunteer fire fighter, dresses up as Santa and delivers presents to needy families in the area.
Call it luck, fate.... or a Christmas miracle..... but this Santa happened to be in the right place at the right time.  He appeared on the scene moments after two cars collided and one burst into flames.  He sprang into action and pulled the driver from the burning car, just moments before it exploded.  He then stayed to direct traffic around the accident until just before police arrived.  This fuzzy photo is the only evidence that Santa was on the scene.  Police records do not mention any Santa Hero. 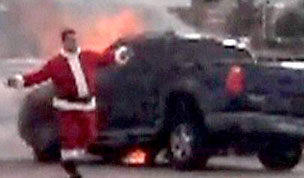 But witnesses to this brave and selfless act were determined to give him his due, and the local TV station tracked down the humble Santa.  He told the news channel, "As soon as I grabbed (the driver's) jacket, and pulled him away, I told him, 'Your car's on fire'.  We turned to leave, and I guess the battery exploded.  And that's when everything went up."
Luddeke finds it hard to admit that he saved someone's life.  But because this Santa has a heart for his fellow man, one family is spared the heartbreak that he himself has known.  Luddeke's own 17-year-old son was killed in a traffic accident seven years ago.  And now he has given the best gift of all to another family.  This is what Christmas is all about.

I John 3:16    "This is how we know what love is:  Jesus Christ laid down his life for us.  And we ought to lay down our lives for our brothers and sisters."
Posted by Pam Kohler at 7:00 AM