Good vs. Evil In Plain Sight

I am going to venture into an area that, as a woman, I may not be welcomed.  But that's never stopped me before, so here goes.  For the life of me, I don't understand why there is so much negative feedback by the mainstream media and secular society to the phenomenon known as Tim Tebow.  Yet there is almost a downplaying of, what is in my opinion, the sick, twisted soul that is Jerry Sandusky.
I am well aware that football is a multi-million dollar industry.  Mere mortal men are lifted into near-god status --- that is, as long as they continue to reach that ultimate goal to which all University Presidents and alumni aspire....winning championships.

Scandals are swept under the rug, as in the case of Mr. Sandusky, for nearly 10 years, because those in  authority appear to have looked the other way.  I find it very difficult to understand how anyone with any moral character would take lightly a report of allegedly inappropriate sexual activity with a child.  "Not wanting to ruin university officials' weekends", is not a good enough excuse.
As a society, have we fallen so far that we can ignore multiple signals that a child may be in danger?  How do all the coaches/teachers/university administrators sleep at night?  Do they ever ask themselves why they feared an interruption in the money-making machine that is Penn State more than they cared if a child might be subject to sexual abuse?  All you have to do is read the Grand Jury testimony to realize that there were enough questions to warrant closer scrutiny and investigation.
On the other hand, everyone from Bill Maher to Hulk Hogan and fellow NFL players are quick to jump on the "bash Tebow" bandwagon.  What is so offensive about a young man who lives his Christian faith; who tries to be a good role model for a younger generation; and credits his Lord and Savior for the success in his life?  And as if it's not enough, Saturday Night Live got a 2-for-1 when they made fun of Tebow and Jesus Christ in the same skit! 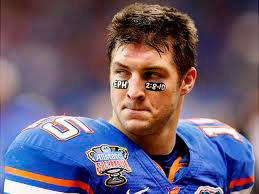 As many of you know, Tim Tebow's parents were missionaries in the Philippines when he was born.  While pregnant with Tim, his mother was infected with a pathogenic amoeba that threatened not only her life, but the life of her unborn child.  She refused to abort the fetus, as the doctors advised, and proceeded to give life to her amazing son.  What is it about this family's Christian faith that so offends the secular world?  Their actions do not harm anyone, and they don't force their beliefs on anyone.  You can take it or leave it.  The alleged victims of Jerry Sandusky apparently did not have that luxury.
As I see it, the lives of these two men, both influential in the realm of football, characterize the difference between Good and Evil.  One is virtuous, ethical, principled and admirable; both on and off the field of play.  The other appears to be immoral, vile, despicable and contemptible; hiding his alleged practices behind a veil of respectability.  There was a time when Good was applauded and praised, while Evil was condemned and damned.  Good used to win in the Court of Public Opinion.  Now it is satirized and parodied, and young students who wish to emulate the integrity of a role model such as Tim Tebow, are expelled from school for striking his prayerful pose. 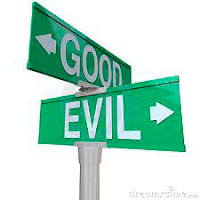 There is one thing I know for sure:  while Evil may be on the rise, Good will always come out on top.  Maybe it's in God's plan to counter the Jerry Sanduskys of this world with the Tim Tebows.  They are out there in plain sight, and it is up to us to choose which side we will follow.
During a New York Times interview, Mr. Sandusky admitted that staged wrestling matches, sleepovers, showering with boys, sleeping alone with them in hotel rooms---all were part of his normal interaction with underage boys.
Now, let me give you a quote from Tebow:  "The greatest thing with this sport and the NFL is we have such a platform and we can take that platform and influence to the next generation.  That is honestly my passion.  And this week we got to announce that I was building a hospital in the Philippines.  And this game means a lot, but that hospital means more to me because that's changing people's lives.  That's giving people faith, and hope, and love.... My ultimate goal with this, with playing football, is to be a great role model that a parent can look at their son and say 'that's someone who's trying to do the right thing.' "
So there it is...in plain sight.  And which do you think is more worthy of our Culture's attentions? ---for all the RIGHT reasons.