I've told you before that the Financial Crisis of 2008 was the event that opened my eyes to the very real possibility of "The End Of The World As We Know It" (TEOTWAWKI).  You may have opened your eyes, but if you've still got the covers pulled over your head, you're not going to see much to help you navigate the stormy waters that are ahead! 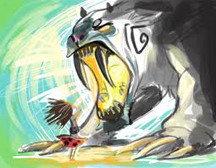 I am an extremely visual person, and I have a very active imagination ---- paint me a picture; tell me a story; show me what it will look like.  So for me, there were a couple of pivotal books that helped me grasp the severity of our situation, and see what the future might look like.  I won't soft-sell it; the scenarios in these books were frightening, but it was not hard to understand that they were all too real.  Maybe I had something to learn from examining them.  So instead of cowering in the corner, I faced the monster head on.

The first one that I read is a book called Enemies, Foreign and Domestic, the first of a trilogy by Matthew Bracken, a former Navy Seal.  The book begins with the Government setting up a down-and-out war vet as a sniper responsible for a mass shooting in a football stadium --- creating a smokescreen for the purpose of eliminating the Second Amendment gun rights of the citizenry.  Sound familiar?  The amazing thing is that this book was written over 10 years ago!  I suspect Mr. Bracken has been awake far longer than the average American.  The rest of the book is the story of an out-of-control branch of the ATF, and how different groups of people band together and fight to protect our freedoms as Americans.  After reading this book, I realized how quickly those rights and freedoms could be seized by a tyrannical government, and how important it is to develop a mindset that will not allow that.  And the most surprising element of the book?  The hero is a WOMAN!

The second book, and perhaps the scariest, because it was written from a very real, personal and human aspect, is titled One Second After, by William R. Fortschen.  This book examines what would happen if a rogue nation detonated an EMP (Electromagnetic Pulse) over the continental U.S.  Anything electronic would be instantly rendered useless.  Think about it.....what would society be like without computers, phones, cars, medical equipment, refrigeration?  Answer---in a single moment, we would be thrown into the Dark Ages.  And how many people would be able to navigate that scenario?  How do you think the entitlement crowd will react?  They have been told they deserve all that's been given them, so do you think it's realistic to expect them to now take it?  And what about the evil elements of society?  How would you maintain law and order?  And what if you, or a loved one, needed medication to survive?  What does that scenario look like when life-saving medicines are no longer available, or there is no way to store them?
And the scariest reality of all?  This book was given to every Congressman and Senator to read!  So they know that this chain of events is all too real.  Do you really want to depend on them for your survival?
What I have found is that I have two kinds of women in my circle of influence.  Those that are brave enough to face the most frightening circumstances of their lives..... and those that refuse to consider the possibilities because it's easier (and yes, less scary) to pretend everything will be OK.  But are you willing to risk your family's safety and survival?  Because if either of these course of events should come to pass, the women who have faced the monster will be primed and ready to guide their families and others to safe ground.  What are you waiting for?  Throw those covers off and head straight to Amazon!