The Importance Of Your Testimony of Jesus! 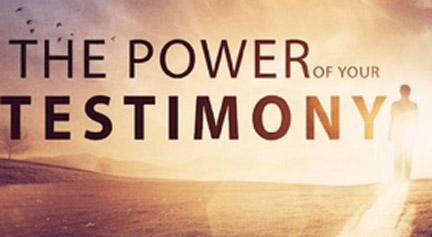 Have you ever thought about the power of your testimony? Or perhaps you think it is of no importance or value. But I believe it is just as important today as it was when Jesus confronted the Jewish religious skeptics and doubters after the healing of the invalid at the pool called Bethesda, in Jerusalem. You see, once again, He had done His Father's will on the Sabbath, and the Jews were harassing the healed man for picking up his palette [and walking] on the Sabbath [because it was seen as breaking the law of doing no work]. I don't know about you, but I'm thinking, "Wait! You're worried about this man picking up his mat, when you can see he is walking for the first time in 38 years"!!! Such is the blindness of people who live by religious rules [only].

When confronted with this offense to the Law, the healed man attempts to deflect blame on to Jesus -- "He told me to do it"! Under Jewish tradition regarding the Sabbath, the man could have been stoned to death for this act. Since he was unable to identify who Jesus was, we must accept that the matter was not pursued in that moment because the Bible does not reveal anymore information. But the Word does tell us that Jesus found the man in the Temple and congratulated him. “See, you are well! Stop sinning or something worse may happen to you.” So, whatever reason, the healed man goes and tells the Jews who healed him [perhaps to divert attention away from himself for working on the Sabbath]. That makes sense, because the Word tells us For this reason the Jews began to persecute Jesus continually because He was doing these things on the Sabbath. [The complex Jewish restrictions regarding work on the Sabbath were man-made rules and most were not supported by OT Scripture]. But Jesus answered them, “My Father has been working until now [He has never ceased working], and I too am working.”

Jesus makes His stance regarding working on the Sabbath quite clear. Furthermore, He establishes that YHWH is His Father! And that makes Him the Son of YHWH, and the Messiah! In addition, He is announcing He is doing work, just as His Father does! You can imagine that this rendered them speechless and extremely angry! That's what we call apoplexy! The Jews misinterpret that to mean Jesus is making Himself equal to God, the Father. But Jesus explains that everything He is doing is by the will of God -- He does nothing on His own. I can do nothing on my own initiative or authority. Just as I hear, I judge; and My judgment is just (fair, righteous, unbiased), because I do not seek My own will, but only the will of Him who sent Me.

Then Jesus makes a very astute statement. If I alone testify about Myself, My testimony is not valid. [It would not be admissible in a court of law]. There is another [My Father] who testifies about Me, and I know [without any doubt] that His testimony on My behalf is true and valid. No Jew would question that God's testimony was admissible -- He is the Supreme Judge of all men. Now, this claim that God testifies to Jesus's identity is a bold statement. Jesus can't simply make it without being able to back it up. And so He proceeds to provide FOUR testimonies as to who He is. Since the Law of Moses states, "Out of the mouths of two or three witnesses let every word be established," (Deuteronomy 19:15), there should be no question about accepting Jesus's claim. Let's take a look at those testimonies...

The Testimony of John. John the Baptist testified as an eyewitness to the truth of Jesus's identity. Jesus states that men were willing, for a time, to receive John's testimony, but the Father's testimony outweighs that of a mere man. There is purpose to God's testimony about Jesus, i.e., their salvation.

The Testimony of the Father. Again Jesus declares that His Father has testified who He is by performing His own works through His Son. And then Jesus accuses them of not having the Scriptures living in their hearts and minds, otherwise they would believe in the One whom God has sent.

The Testimony of the Scripture. Then comes the final indictment against the unbelieving Jews. They have worshiped the Scriptures, thinking that their eternal life lies in believing and following the Law as written in the Scriptures. And they missed the truth that these very Scriptures testify of Him! He doesn't seek the glory and approval of men. In fact, He tells them, I have come in My Father’s name and with His power, and you do not receive Me [because your minds are closed]; but if another comes in his own name and with no authority or power except his own, you will receive him and give your approval to an imposter. And if that's not enough, Jesus tells them that Moses, the very one who wrote the Scriptures accuses them ... he wrote about me personally; But if you do not believe his writings, how will you believe My words?

But, here's what I'm thinking ... Has anything really changed? There are still Jews who do not believe that Jesus is the Son of God, or the Messiah. And we, Christians are also guilty of seeking the testimony of other men about whether it is true that Jesus has transferred His power to us. Many do not believe the Scriptures where He says we have been given His power and authority over the Enemy. They do not believe the testimonies that we do not do anything that Jesus has not instructed us to do; that we do not testify of ourselves, but rather His power and authority [in us] to do great works through us. It is the same dynamic as Jesus experienced when He walked the earth.

And how many of our fellow Christians will follow a man who "comes in his own name and with no authority or power except his own", and receive him and give their approval to an imposter? It is very important to Jesus whose testimony we receive and believe. Does the testimony align with Scripture? Does your spirit recognize it as truth delivered in humility for the glory of the Father and Son -- or is it given by men who seek to glorify themselves in the pursuit of power and influence? We must be earnest in identifying the veracity of testimonies about Jesus in the world. We have been given the Holy Spirit to corroborate the testimonies we hear. There are great and compelling testimonies from men and women who have experienced being used by Jesus to exhibit His power in the earth; just as there are people who have been the recipients of His overwhelming power to change their lives. Jesus said that those who believe and follow Him, will do the [miraculous] works that He has done, and even greater! Just as Jesus said nearly 2000 years ago, the Father has never ceased working, and neither has He! May He be glorified throughout all the earth by our experiential testimonies of how He has worked in our lives! Don't keep them to yourselves -- the world needs to hear them!

Psalm 71:18   And even when I am old and gray-headed, O God, do not abandon me, until I declare Your [mighty] strength to this generation, Your power to all who are to come.

Email ThisBlogThis!Share to TwitterShare to FacebookShare to Pinterest
Labels: Our Testimony, Power and Authority