The True Meaning of Christmas 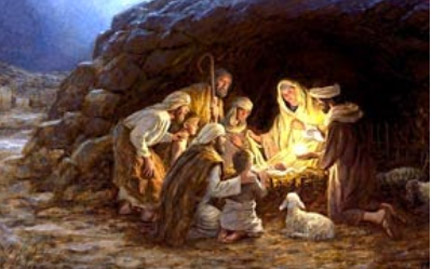 As Christians around the world wake up to celebrate Christmas this morning, I want to invite you to hear an amazing [and different] viewpoint on this holiday. It is by Kathy Lee Gifford, entertainer and author, who is fearless in presenting and defending her faith. Now, I know that Kathie Lee is not what social media would call "an influencer", but I've always admired her ability to speak the truth about her faith, instead of following whatever the latest "fad" is among the religious heavyweights.

So, allow me to share what she spoke earlier this week on Fox & Friends to the somewhat astonished hosts, who introduced her by saying at this stage in her life, it is all about spreading the Gospel. She responded, "Yes, for me it is about the Kingdom of God ... but here is what is difficult about it [for me] is that like so many Western believers in Jesus, all of my life I believed the Christmas story I'd been told in Sunday School. I believed everything I'd been taught in Church. My father was Jewish so I also had some Jewish heritage, Jewish blood, and there was the Hanukkah [story], but I always knew it was one continuous story".

Kathie Lee continued, "Unfortunately, we've broken it up along the way. It's become Old Testament ... New Testament. We never should have done that. It's one beautiful love story of Jehovah Elohim, Creator of all things, loving everything He has created ... and creating a world that needed to be redeemed, and about sending His Son, Jesus, to redeem it. But everybody forgets it's a Jewish story! Jesus was Jewish. His mother was Jewish. His earthly father, Joseph was Jewish. All of His first believers -- His disciples -- were Jewish. People weren't even called Christians until Jesus had been crucified, resurrected, and ascended into Heaven! They were called followers of The Way. And Jesus said, "I am the Way, the Truth and the Life". So I celebrate now, knowing after studying for decades, that Jesus was not born in December. Jesus was not born in a stable. Those things are just not true".

She went on to declare, "Jesus was conceived during the Festival of Hanukkah. Right now, the Holy Spirit, during this time of the year came upon Mary. He was born nine months later during the Festival of Sukkot. People say, "You're spoiling Christmas for me"! I don't mean to spoil anything. I just mean to give people a different, a deeper, and more enriching understanding of the Scriptures. Every important thing that every happened in Jesus/s life happened on a Jewish festival day! And we don't even know what those are except for Passover, the day He was killed"!

At that moment, it became clear that the hosts of the TV show were uncomfortable with what she was saying, most probably because it went against the traditional Christmas story we've all been taught. But oh, how true were her words! I have written for many years on the truth about Christmas, and it is a difficult pill for most Christians to swallow. We've all been brought up with the nostalgia and emotions of Christmas, with its lights, its songs and movies, and the idea of a family-centered day of peace and joy. It has since become highly commercialized, and the holiness of the Christ child's birth must share center stage with Black Friday and all the materialistic ornamentation and embellishment of the holiday.  It is in the midst of this convolution of history, un-Biblical rituals, and human emotions that we must determine how we feel about, and observe Christmas.

But it is equally important to stop and contemplate what Kathie Lee presents as the true meaning of Christmas in the Biblical sense. That is a difficult decision that each individual must determine for themselves. I would challenge you with the following questions:  1) Are we worshiping God in practices that are rooted in mankind’s traditions and decrees, or are we worshiping according to Biblical truth?  2) Which matters most – what it means to us or what it means to God? I will say this ... without exception, it seems as if Christians struggle with letting go of what we have known in our Christmas celebrations.  Somehow, we continue to equate our emotions and memories of the holiday, along with the assault on our senses (beautiful lights, decorations, and festive trees), with the worship of our Savior.  Somehow, it seems difficult to celebrate His birth while letting go of our fleshly desires to look upon worldly delights.

God was very exacting and clear about how He wished to be worshiped, and to Whom each Feast Day pointed.  Do you see anywhere in Scripture that He commanded the day of the birth of His Son to be a "holy day", which is the origination of our term "holiday"?  Do you see evidence of the Disciples worshiping that particular day anytime after His death?  Yes, both Matthew and Luke give us a beautiful story of the details of His conception and birth, and we should honor all that it signifies for us. Gifts were brought to Him, but as tokens of His Kingship, His Priesthood, and His role as Savior. Nowhere do I see suggestions of what the Christmas holiday has become.

Let me be clear ... we are not called to become Jews, but as a righteous branch grafted into the true olive tree, we are called to share and spread the message and instructions of the Gospel. We are to point the Jews to Jesus as their Messiah, and as our Savior, Redeemer, and the Light of the World. May that Light never be extinguished!

So, as you contemplate another Christmas, come and gone, I hope that you will be able to dwell upon the true meaning of our Savior's conception and birth, and decide what is right for you in the matter of pleasing God. You will know, because you will feel at peace and all conflict will be gone. That is the true essence of "Peace on earth, and good will toward men." And that is what Kathie Lee was bold and unafraid to share. Merry Christmas!

Isaiah 9:6-7     "For a CHILD IS BORN to us, and a son is given to us, and the government is upon his shoulder: and his name shall be called, Wonderful, Counsellor, God the Mighty, the Father of the world to come, the Prince of Peace. His empire shall be multiplied, and there shall be no end of peace: he shall sit upon the throne of David, and upon his kingdom; to establish it and strengthen it with judgment and with justice, from henceforth and for ever: the zeal of the Lord of hosts will perform this.