You Can Not Only Survive Today's Uncertainies ... You Can Thrive! 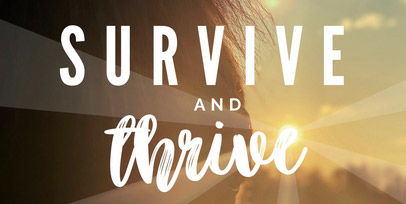 Today, I'm going to use a post I wrote in 2014 as the source to speak on our ability to thrive in the midst of these uncertain times.  Many of us are wondering about the destiny of our nation; a nation that was founded on Godly principles, but seems to have lost its compass along the way. In the 2014 post, I quoted Isaiah 1:9, which reads, If the Lord of Hosts had not left us a few survivors, we would be like Sodom, we would be like Gomorrah.

Although this vision and prophecy was given to the prophet Isaiah about the destiny of the nation of Israel during the days of Uzziah, Jotham, Ahaz, and Hezekiah, the kings of Judah, it also foretells the future of the tribe of Judah during the End Times. Furthermore, I believe its message should be heeded by our own nation, as well. I just love the multiple layers of significance that the Bible holds throughout all generations! Those who say it is no longer relevant in our time are sadly (and dangerously) deceived.

Isaiah laments his sinful nation ... he accuses them of immorality and criminality; they have forsaken the God who made them a great nation above all others, and they now only show Him contempt -- and worse, still, they ignore Him. Because of their "detestable disobedience", the future of their country is bleak. Their land has been attacked by enemies and strangers occupy what was once so generously bestowed upon them. And then the prophet tells them something that should have stopped them in their tracks, and caused fear to bring them to their knees. The nation of Israel -- indeed, all the world, including today -- knows what befell Sodom and Gomorrah. And Isaiah is showing them they deserved the same judgment. We read in Ezekiel, Chapter 16: "Now this was the sin of your sister Sodom: She and her daughters were arrogant, overfed and unconcerned; they did not help the poor and needy. They were haughty and did detestable things before me...".  The purpose of this post is not to dwell on the sexual immorality and perversion that were practiced in Sodom and Gomorrah, but to take to heart the judgment that fell on them, and to recognize the hope that is in the remnant that survived.

Isaiah received spiritual perception in the 7th Century B.C. to minister to the nation of Judah. He knew that God had a purpose for them, but he needed to make them see how far they had wandered from Him. All Israel knew that God had poured fiery sulfur on the cities, completely destroying them and all of their inhabitants. (To this day, the area where Sodom and Gomorrah were located remains a desolate wasteland.)  So Isaiah wants them to ultimately understand what God did out of the midst of that tragic judgment, and how they deserve the same verdict. He points to a particular nature of God as their reason for hope.

He tells them that "the Lord of hosts" spared a remnant, and it is that Sovereignty and Mercy that He wants his nation to recognize. And it is very important to take note of the name for God that Isaiah uses in this verse. In Hebrew, "the Lord of hosts" is spoken of as Jehovah-Sabaoth. From our human perspective, this is the name of God to run to when there is no other help. From God's perspective, this is the name He uses when He wants us to know that He is not only the One who delivers us, but also the One who judges us. He wants us to bow our knee to Him. This particular name of God meets our failure, and offers deliverance... when we are willing to repent.

Isaiah wants Judah to realize that their actions deserve the devastating and complete punishment that befell Sodom and Gomorrah. They need to acknowledge that Jehovah Sabaoth -- "the Lord of hosts" -- has rightly judged them, but He is also going to deliver them by the means of that remnant. A small group will survive His judgments in order to fulfill God's purpose for them.

Over 700 years later, the Apostle Paul quotes Isaiah's forewarning of a remnant, in Romans, Chapter 9.  He says, "And Isaiah solemnly cries aloud over Israel:  Though the number of the sons of Israel be like the sand of the sea, only the remnant will be saved [from perdition, condemnation, judgment]!  Paul is trying to tell the Hebrew nation that God's own prophets have foretold this sad and frightening truth -- that their disobedience deserves full destruction, BUT through God's mercy, He will leave them a remnant that will survive ... a Jewish remnant that will bow their knew to their King and Messiah.

The same is true for us today! We can be part of a remnant in this nation -- and the world -- that displays our supernatural power [that comes from Jesus Christ] in the midst of the downward spiral we see around us. We can step into our destiny to help others see that we have a purpose for the Kingdom of God and to spread that glorious hope.

We can tune out the voices of this modern world and tune into the voice of our Master. Because while it may seem like the world is going mad and is out of control, it doesn't seem that way to Jesus. He has the foreknowledge of where the world is going before it results in His return. He has told us in His Word ...  You will continually hear of wars and rumors of wars. See that you are not frightened, for those things must take place, but that is not yet the end [of the age]. For nation will rise against nation, and kingdom against kingdom, and there will be famines and earthquakes in various places. But all these things are merely the beginning of birth pangs [of the intolerable anguish and the time of unprecedented trouble].

None of these things we are experiencing is a surprise to Jesus! And they shouldn't be to us, either. He told us they would happen so we would not be shocked or surprised. But somehow we have been deceived into thinking these warnings weren't meant for us. So we react in fear and anxiety. But we have a choice as to how we respond to these foretold events.

Instead of living in apprehension and dread, what if we lived in the knowledge that the things Jesus described must happen before He returns? What if we looked at it as if these events signaled His rescue for a world in which bedlam is flourishing? What if we saw the events for what they are -- the descent of a world that has rejected God's Sovereignty; His right to rule over His creation?

You see, we have a choice of how we think about the failing condition of the world. We can choose to be troubled over the circumstances we find ourselves in; or we can rest assured that it's all going along according to God's plan... and we know the Victory that awaits us. We can look at our reality from the perspective that the glass is half empty, or we can rejoice that it is half full. We can join the "misery loves company" club, and align with those who bemoan the loss of our prosperity, the threats to our affluent way of life, or the erosion of our constitutionally guaranteed freedom. OR we can trust that God has a plan, and we are part of it! And our part is to trust in Him as we actively seek to bring salt and light to a world that is awaiting His glorious appearance.

We can show people that everything they are clinging to [their material things, their wealth, their job, their social status] ... it's all just illusion! It may all disappear, but you can choose to believe that God is delivering you to a new and fresh revelation of His will for your life. Even in the midst of misfortune and the decline of nations, God is always moving forward towards His ultimate finale ... the return of our Lord. And we have choices to make as we participate in His timeline. We can not only survive the events that are foretold, but we can thrive in them because we know where they're taking us. And we can share the reason for our hope and optimism in a world that appears defeated.

So, we don't ignore Jesus's warnings, nor do we stay rooted in them. We rejoice that we have been born for such a time as this, and that we can choose to abide in the inner calm and spiritual well-being as a Christian who trusts in God's plan. We will not only survive these days, we can thrive!

Isaiah 28:21    For the Lord will rise up as at Mount Perazim, He will be stirred up as in the Valley of Gibeon, To do His work, His unusual and incredible work, And to accomplish His work, His extraordinary work.