The Writing On The Wall 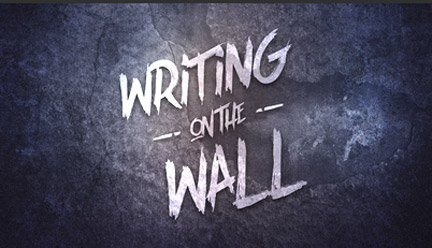 I have no doubt that this blog will not be found favorable among many of my fellow Christians who follow the prophets of hope and divine deliverance from the world's current deterioration. I want to point out that we really do have a lot in common -- our belief in the eternal promises of the One True God; our desire to seek a righteous life before the Lord and to serve His Kingdom; and our hatred of the evil that has infiltrated our culture. But as soon as I speak about what I discern will be judgment against the nations [and cite why we deserve it], then I sense a difference in the understanding of what our future might hold.

It is clear to me that the rise and fall of nations throughout history all have the hand of God upon them. No empire has lasted forever, and certainly not from their own power. And as Christians, we have ample examples in the Bible. In the Old Testament, both Israel and Judah were judged for their apostasy; arrogance; sexual perversion; hypocritical and corrupt priests and prophets; and the dishonest and immoral conduct of the rich and powerful. Injustice ruled the day. But many Christians will say, that was the Old Testament. They will proclaim that God set up a new covenant through His Son, Jesus Christ, and we are His heirs of a new Kingdom on earth. The will further attest that God desires to give us His Grace, Mercy, and Favor to defeat evil and help establish a new Heaven on Earth, with Jesus establishing His throne in our midst. God's anger and wrath is held for those who reject His offer of salvation.

But God's judgment against unrighteous nations continued in the New Testament. Bibleask.org gives a succinct and valid example in the case of Israel, God's favored nation. After the inhabitants of Judah were taken into captivity in Babylon in 586 B.C., the Lord brought the Jews back to their homeland and rebuilt Jerusalem to bring about His plans for saving the world through the Messiah. But after the Jews crucified the Messiah, God finally destroyed the nation of Israel by way of the Romans in 70 A.D.  The people were taken captive and the city razed to the ground. For thousands of years, God had been patient, waiting for His chosen people to fulfill their God-appointed assignment of taking the knowledge of Him to the world. As sad as it is, the truth is that Israel's rejection of God, resulted in His rejection of them until one day in the future when they will recognize Him as the Messiah that God had promised them, and He will restore them to their position as His world leaders.

Soooo, for those Christians who think that we will remain exempt from God's anger and that we will not stand in judgment for our own "apostasy; arrogance; sexual perversion; hypocritical and corrupt priests and prophets; and the dishonest and immoral conduct of our rich and powerful"  -- just as ancient Judah and Israel were -- doesn't know or understand the fullness of the character and attributes of God. Yes, He is "longsuffering", which means patient, forgiving, charitable, tolerant, and understanding. But He is also Holy and righteous. There comes a time when He says, "Enough is enough and I will tolerate no more". We have done everything that the rebellious nations in the Bible have done [and I'm not too sure it isn't more]. There will be a day of accountability. And I believe that prophets who deny that are mistaken. Perhaps they believe that there will be seasons of relenting, and periods of renewal. Or maybe they are describing what it looks like after the return of Jesus when there will be revival and restoration of God's Truth and Sovereignty. But if there is denial of judgment, then I believe they are not rightly representing what Scripture tells us.

I have always found such amazing insight in the Book of Daniel. As I mentioned earlier [and in a blog from April, 2021: The rise and decline of nations throughout history all have the hand of God upon them. Daniel, that great prophet of the Bible, who had favor and compassion from God, proclaimed that "It is He who changes the times and the seasons; He removes kings and establishes kings" (Daniel 2:21). It is evident that God determines the ways in which a nation progresses and develops. If a nation and its leaders stray from the precepts of God's counsel, then history will see them exit the stage according to His will.

The Bible gives us an example of this when Daniel interprets the handwriting on the wall at King Belshazzar's feast: God has numbered the days of your kingdom and put an end to it; —you have been weighed on the scales [of righteousness] and found wanting [deficient]. That very night, Belshazzar's kingdom fell to the Medes and Persians. It happened suddenly -- like "a thief in the night". Do you think the nations are found "wanting" today? What about the nations in Venezuela, Brazil and Central America whose governments have created such a surge of poor and desperate people to our borders? What about the nation of Mexico who has surrendered to violent organizations who extort its own people to benefit their trafficking and drug trade? What about our own beloved nation? What does God think of us as the Number One destination of trafficked and enslaved people? Aren't we due His wrath and judgment for failure to acknowledge Him as we continue to idolize wealth, power, sexual perversion and abortion, which is done in the same spirit as ancient child sacrifice?

Take a look at Daniel 5 and read the story of King Belshazzar of Babylon. As he and his thousands of nobles feasted among Judah's stolen riches, they "praised the gods of gold and silver, of bronze, iron, wood and stone". Suddenly a human hand appeared and wrote Mene, Mene, Tekel, Parsin on the wall. It frightened Belshazzar so much he went weak in the knees. When Daniel prophesied the end of his kingdom (see above paragraph), he not only lost his power, but his life that night. Read that again ... his kingdom was destroyed that very night; taken from him like a "thief in the night". We desperately need to understand that when God says it, it will surely come to pass.

Believe me, I do not like writing blogs like this. But if we cannot see the handwriting on the wall regarding our current situation, then we have fallen for a powerful delusion to lull us into compliance with the Enemy's plans to dominate the world. We must be bold and declare the Truth, just as Daniel did, even when doing so threatened his life. Silence has been contagious in the American Church. But Courage is the hallmark of a true Disciple of Christ, and it is contagious, too. That theory did not originate with me, but it has been true since the beginning of time, and especially true for those who profess genuine faith in Christ.

My friends, it is time to recognize the handwriting on the wall, and decide that you will not hide in fear and silence. We were not born for this time to worry about ourselves and what we see happening in the world. It is only important to understand from the level that we can educate others to the hour of our destiny. And the good news is that I know there are pockets of righteous followers of Christ who are in alignment with the Word and walking in Spirit and Truth. They represent the Remnant that God will use to make His final moves on the cosmic chessboard. But the ultimate question we all need to be asking ourselves is this .... when the Judgment is final, and the Lord resides on the earth, "Will He know me"?

Psalm 110:5-7  The Lord is at your right hand; He will shatter kings on the day of His wrath.  He will execute judgment among the nations, filling them with corpses; He will shatter chiefs over the wide earth. He will drink from the brook by the way; therefore He will lift up His head.