The Word From the Lord is "Restored Families" 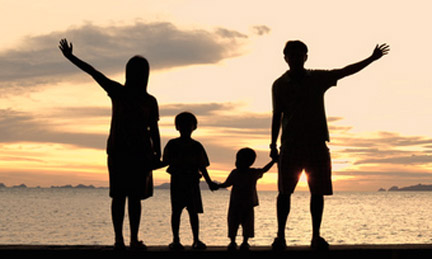 That is what I heard in my spirit as I asked Jesus how we can save this nation. That may sound confusing or too simple to some, but it cannot be denied that we have been seeing the deterioration of the American family for some time now. God's plan for the family unit has degenerated from the Biblical model He established as a father, mother, and children to become any combination the human mind can imagine ... two fathers or two mothers with science-enhanced children; children who choose to change gender; children born outside of wedlock, and far too many one-parent families.  Furthermore, children were called blessings by God, and He instructed His creation to "be fruitful and multiply; fill the earth and govern it". But men sacrificed their children to idols, and children became a commodity; to be eliminated when desired. God grieved then ... and He grieves now.

You see, the Bible chronicles the effects of disobedience so well. And although it might seem an exaggeration, the Word shows us that it only takes one generation to abandon the morality established by God in order for a nation to fall away from Him. The result of this rebellion is the absence of the Presence of God, and a generation that loses His blessings as they choose to follow other gods. The great English theologian John Wesley stated it perfectly: "What one generation tolerates, the next generation will embrace". There has been a continual sliding away from Godly principles towards lives that mimic the temptations of the world.

When this nation was founded, the majority of the country looked to the Bible when establishing its laws and governmental structure, its educational systems, and the accepted conduct of society. And the nation flourished. But just like ancient Israel, when one generation begins abandoning God and His commandments, disobedience becomes the norm, and the next generation no longer knows the boundaries that holiness establishes. It happened over and over again in the Bible... the people would rebel, God would rebuke them and turn them over to the consequences of their choices and the idolization and worship of false gods became the pattern. They would repent, God would forgive them and bless them and they would again prosper until another generation began corrupting God's guidelines and the moral decay would start all over again.

Nothing is different here in modern-day America. And this pattern is easy to see among our own families and generations.  Two generations ago, families attended church together; they knew the Lord and the history of faith in their bloodlines. Today, it is rare for the Millennial generation to declare faith in a God they've never known, or to acknowledge that they are bowing down to the false gods of our culture: entertainment, technology, social media, material wealth, sex, or politics.

But who is to blame for this decline in our families, culture, and nation? In the Bible it was the parents and the priests. Same thing now ... for the 246 years this nation has existed, it has been the parents and the pastors who kept us on track. But one only has to look at how both of those turned from the God of the Bible [as their guide] and began to conform to the dictates of the world. The parents lost their way, turning the instruction of their children over to the programs of godless universities. The churches lost their way, allowing the government to determine what they could teach and preach. And both became part of a nation that once followed the ways of the Lord, but no longer knew Him and did evil in His sight. We have a generation whose god is their phone and Social Media -- it is where they get their morals, their identity, and their value.

Ancient Israel always seemed to have a king who rose up and returned the people to the Most High God. This ruler would remind the people of all God had done for them; he would remind people of their history with God. I fear that we have a more difficult struggle because our history is being revised, rewritten and erased. The Kingdom of God is a concept to be ridiculed and mocked. And too often, it has become a buzz word in the Church as the latest theme for evangelism; it's trendy, but no real staying power. Where are the Spurgeons, the Tozers, the Moodys? Although I am greatly heartened as I see individual Christians and the remnant fervently seeking to make the Kingdom a reality, we need to see Church unity become a force for real change in the moral foundation of this country.

Also, I think we have forgotten that we serve a jealous God. He is Jehovah Qanna. He will not stand for any rival. He is not envious; that signifies greed. Our God possesses righteous jealousy because of the Goodness of His love for us, His children, and His relationship with us. He desires our worship because He deserves it; He is the best thing for us. And if we are worshiping anything besides Him, we are headed down a path to destruction.

So, it is time for us to repent and return to the path of righteousness in this nation. And it starts with restoring our families! God will once again bless this nation with His righteousness and prosperity when we dedicate ourselves to raising up a generation that will abandon the ways of the world to follow Him, and Him only! This nation can be redeemed when our churches start equipping their members to resist the secular culture; teach the children [in spite of what Twitter or Facebook says] that all gods are not the same; throw off the shackles of government; and actually GO OUT to disciple and baptize in the Name of Jesus!

Let us not see the name of America be dragged through the mud any longer. Let us fortify the next generation with the Truth of the Word so that they might know the Lord. And it starts with the family. Enemies of God have always found it easy to corrupt a God-fearing nation when the people get lax about securing faith for the next generation. It is up to us to begin restoring our generations to a knowledge of the One True God. Without Him, we will continue to compromise and fall for the lies of false prophets. It is time we declare that we have the power of the Holy Spirit with us and in us! We can overcome the rebellion against God and re-establish our greatness when we restore our families. Let those with ears to hear, receive the Word from the Lord!

Psalm 71:18   Now that I am old and gray, do not abandon me, O God. Let me proclaim Your power to this new generation, Your mighty miracles to all who come after me.

Email ThisBlogThis!Share to TwitterShare to FacebookShare to Pinterest
Labels: Family, Generations, Restoration, Sins of our nation