Sodom And Gomorrah & Lawlessness in America 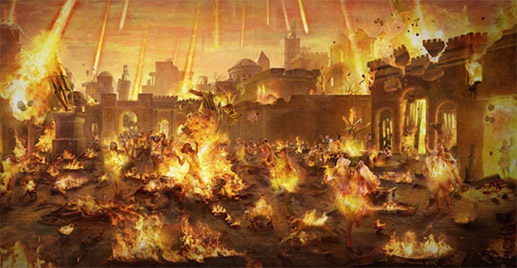 I know that sounds like a sensational and overdramatized title for today's post, but let me share some information with you and see if you might not agree that it is appropriate. Our little Home Church group has been studying Genesis and considering all the resources throughout history that give us a broader picture of what was going on in this pivotal Book of the Bible.

So much history of the world [and man's relationship with God] is packed into these 50 chapters and sadly, much of it is ignored, skipped over, or disavowed by the modern [and make that Western] Church, that I fear we don't see the comparisons with our current generation. Not only is the average citizen unaware that Satan planned to corrupt mankind's God-created DNA in Genesis 6, but they don't see that that perversion mirrors all the present-day scientific experiments with vaccines, gene editing, DNA sequencing, and human-animal hybrid experiments -- and neither do Christians see it!

So, our little Home Church just finished getting into the story of Sodom and Gomorrah in Genesis 18 and 19. To be honest with you, the Bible gives very little detail about what made these two cities so evil in the eyes of the Lord. What we do know from Scripture is this: The Lord Jesus, accompanied by two "men" appears to Abraham, sitting outside his tent. Abraham runs to them and bows down to the ground, indicating that these are no ordinary men, but actually this is Jesus and two of His angels. who have come to announce to Abraham the promise of an heir from God. Remember, Abraham is familiar with God's voice. If you are a student of ancient texts such as the Book of Jasher, then you know that Abram studied at the feet of his Eight-Times Great-Grandfather Noah, so he knew all about YHWH, and heard His voice call him out of the land of Ur to go to Canaan. So by the time Abraham is 99 years old in Genesis 18, he's pretty familiar with the Lord!

After this amazing promise of an heir, Genesis says the Lord and His angels "got up and looked towards Sodom". It seems that their visitation to earth had a two-fold purpose. The Lord says that the outcry of the sin of Sodom and Gomorrah was so great, and their sin so grave that He was going to see for Himself if they had acted as vile and wicked as the cries coming to Him indicated (Genesis 18:20-21).  It is hard for us to imagine just how wicked because there is little detail given in Scripture to describe the lengths that the citizens of Sodom and Gomorrah went to in their rebellion and perversion.

But, the ancient Book of Jasher (referenced in Joshua 10:13; 2 Samuel 1:18; and 2 Timothy 3:8) leaves no doubt as to why the Lord and His angels came in answer to the cries that had ascended to Heaven! For those who shy away from this historical reference material because it was not included in the Canon, the fact that God chose to reference it in the Bible tells me that it carries some credibility with Him. I use it for historical perspective and have found that it aligns with Scripture; it just gives us more details that expand our understanding of what the Bible reveals.

That being said, here is just a portion of what was understood by the ancient Israelites regarding the abominations of wickedness in Sodom and Gomorrah:  And by desire of their four judges the people of Sodom and Gomorrah had beds erected in the streets of the cities, and if a man came to these places they laid hold of him and brought him to one of their beds, and by force made him to lie in them. And as he lay down, three men would stand at his head and three at his feet, and measure him by the length of the bed, and if the man was less than the bed these six men would stretch him at each end, and when he cried out to them they would not answer him. And if he was longer than the bed they would draw together the two sides of the bed at each end, until the man had reached the gates of death. (Jasher 19:3-5)

And when a poor man came to their land they would give him silver and gold, and cause a proclamation in the whole city not to give him a morsel of bread to eat, and if the stranger should remain there some days, and die from hunger, not having been able to obtain a morsel of bread, then at his death all the people of the city would come and take their silver and gold which they had given to him. (Jasher 19:8)