The Kingdom of God Is the Answer To All Things! 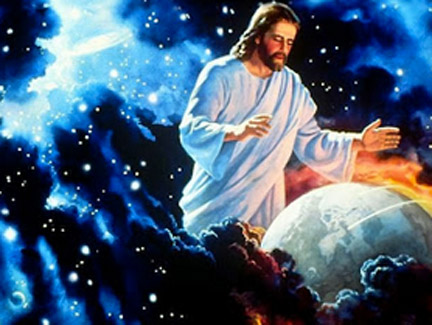 As I contemplate all the disorder and chaos that the world has seen throughout time [and in the last two years of our lifetimes], I cannot help but discern how far mankind has fallen from God's original purpose for us. We were designed as images of the Godhead; to be a branch or colony of God's Heavenly Kingdom, maintaining Heaven's order here on earth. It didn't take long for the one who rebelled against God in Heaven to reassert himself here on earth and to infect the nature of man with a disrespect for divine law and moral code. And very quickly, men lost the idea of Kingdom living as they developed societies and cultures that served themselves.

Yet, our Creator never abandoned His desire to reconcile our relationship, nor did He give up on His ultimate goal of establishing His Kingdom colony here on earth. In fact, He was so committed to us and His plan that He sent a part of Himself, His own Son, as a guarantee that those who would believe in Him, and pledge their loyalty, could never be separated from His Kingdom. And no matter what the world sowed, there would be those who would stay dedicated to living, promoting, and executing the Kingdom.

And what exactly does that look like here in the midst of a contentious twenty-first Century? First of all, I think we need to come to an understanding that the "Kingdom of God" is not just a "Church" concept. It was Jesus's absolute goal and the answer to everything in the world! In the Sermon on the Mount, in the Book of Matthew, we see Jesus's treatise on the Kingdom of God. And I do mean "treatise", which is defined as "a written work dealing formally and systematically with a subject"; in this case, Matthew exhibits how God orders His Kingdom government in Heaven and intends for it to be mirrored here on earth.

So, all that's conceptual ... what should it look like in reality? Everything in our lives should come under the control of the Kingdom of God. That includes our personal lives and how we live them; our economy; our education systems; our society and how we treat each other; our international relations with other nations -- everything! It's easy, as modern Western Christians, to consign the Kingdom to the Church, but that limits it. The Kingdom, as Jesus saw it, was absolute; it gathered all of life and earth's concerns under its umbrella, and established a divine order by which it all functions -- just as it does in Heaven.

As I listened to President Biden's live speech on the anniversary of the January 6th event at the Capitol, I couldn't help but think how much we need that understanding of the Kingdom now! Our society needs a transformation to "Kingdom living" in the way we view each other and our differences in politics, lifestyles, beliefs, and opinions. There is room for dissimilar viewpoints, but Jesus introduced ethics and moral law into His discussion of Kingdom on earth. His message in the Sermon on the Mount was grounded in the transformational Kingdom Thought that there is freedom for all men in the principles and solutions of Kingdom living.

The principles of the Kingdom of God transform hearts, which transforms the social order of all men on earth. We can discover the fullness of life [and all it offers] when we organize and construct our lives around the Kingdom. During the centuries, we have lost the idea that the Kingdom of God provides the answers to all things. Our lives no longer function with the Kingdom as our goal or our main influence. We have given that authority to other men. But I am happy to say that there is a remnant that is re-discovering what man and the Church lost. We are redefining our lives, as our spirits recognize the fullness of all it represents; that it is more than our present sanctuary and security; more than just a future hope. The Kingdom of God contains the totality of God to meet the totality of man's needs NOW!

If we ever discover and step into the truth that the Kingdom of God is the answer to the chaos in the world, and that we can be transferred from that disorder and chaos into the realm and order of God's Kingdom, then the deception of the world will be clearly seen for what it is... the strategies of those who seek their own power and influence over the masses in order to control the way the world systems operate. And they control it through self-centered love, fomenting division on many levels ... race, gender, age, wealth, education, opportunity, and social class. All that creates disorder, and the foundation of God's Kingdom in everything is order.

When we can be true imitators of Christ [which was the goal of our original design] by becoming Kingdom citizens, we will find purpose and order in our lives -- even through our trials and battles. That's what brings meaning to our lives and the answers we seek in the midst of our journey. We are not promised the fullness of the Kingdom until Christ returns and we are translated into bodies as glorious as His, and we enter into our citizenship in the Heavenly Kingdom. But until then, we can be intentional about Kingdom living here on earth ... 1) understanding where we are now and that nothing in this life is accidental or incidental; we are here for a purpose; 2) believing with a spirit of expectancy that God will honor His promises to those who have faith in His Son; 3) stepping out in faith and obedience to God's moral laws; 4) knowing that our names are written in God's Book of Life, along with our victories and His grace in our times of need, which are a part of this life; 5) being willing to live separately from the world; being intentional about being righteous, even when you're swimming against the current of the world; 6) putting God's opinion before man's; refusing to submit to the fear of man, and what people think of us, instead preferring to please God in all matters; 7) and finally, we can choose to act as a Kingdom citizen in all our circumstances -- at our jobs, in our families, in our marriages, and even in the midst of the evil we see in the world.

The bottom line is this ... we are no different than the Disciples and the followers of Jesus in that first Century. We find ourselves as outcasts in a world that defiles the Divine nature of God. But there's good news, too! We are part of the remnant that God has always chosen to represent Him throughout history. We are coming into the fullness of our identity and our purpose, and we are not afraid to be deliberate about declaring that it is the Person of Jesus Christ -- not the religious institutions of Western Christianity, the traditions of Eastern mysticism, nor the New Age belief systems of humanism and relativism -- it is Jesus who is the manifestation of God on earth. It is the Person of Jesus Christ who unlocks the prison doors of spiritual darkness and leads mankind to freedom from his self-imposed blindness.

Jesus came, bringing the Kingdom of God with Him, and challenged us to establish it and expand it until He returns. I believe our time to capitalize on that directive is now. Have we reached that point in history when His return is imminent? When the Kingdom of God finally overthrows the kingdom of darkness? No one can know for sure. But the distinction between the two kingdoms is clearly understood by those called as Ambassadors to the King here on earth. We must come together in acknowledging that nothing in the world BUT the the King of kings, in all His demonstration -- is the only answer. Politics, religion, technology, science, and the authority of man will never solve our problems. Only our Lord and Savior, Himself! I pray that this generation will be the one that ushers in His power, His glory, and His Kingdom forever!

Revelation 11:15    “The Kingship of the world now belongs to our Lord and to His Messiah, and He shall be King for timeless ages!”