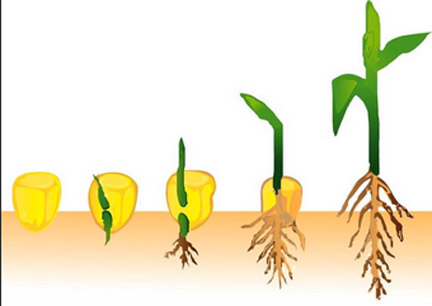 I'm in the process of developing the outline for a new book I want to write, with the working title of "From 'Surface Level' to 'Deep Roots': What the Body of Christ Needs to Understand About Our Identity in Christ". This subject matter has been stirring up my spirit for awhile now, and I continue to hear the promptings to write another book. I've had ideas in mind since the last one I wrote in the Spring of 2020. But each time I settled on what I thought the focus would be, the Holy Spirit whispered, "Go Deeper". And the events of the last two years certainly call for an awakening in the Body of Christ to understand God's intention for us in these tumultuous times.

I am also struck by the number of times that people of faith have recently mentioned to me their frustration at encountering "surface level" Christians. The age range using that particular phrase has run from a Millennial Christian [in describing the lack of depth in her counterparts in the Church], to a "seasoned" Christian, who bemoaned the absence of substantial understanding of Biblical history or prophecy, to all the age groups in between. Apparently, there is a noticeable lack of commitment to a lifestyle of real faith.

Of course, I'm not painting the entire Body of Christ with this broad brush, but as we continue to be stretched in our faith, due to national and world events, I am unable to ignore what I discern ... that many Christians are struggling with coping with their fears of the future; or making life decisions out of fear; or mistrusting the promises of the Bible. Then there are those who turn a blind eye to the very real threats we face, and struggle to believe that persecution or trials and tribulations are a possibility. Yes, the ultimate victory is ours in Christ and what He accomplished on the Cross, but I think that God wants us to see the "Big Picture" ... the good, the bad, and the ugly that is in this world ... but see it from His perspective; His vantage point from Heaven, and as Creator.

We cannot simply revel in the "Good News" that we are Saved and our victory in Christ is eternal life. Don't mistake me -- that is our ultimate reward and inheritance as a child of God; and it is greatly to be prized and shared! But we have a job to do while we are here, and if at first it is to recognize Jesus as our Savior, how more productive for His Kingdom on earth is our work to advance the knowledge and acceptance of that Kingdom among all peoples, tribes, and nations? At the same time, we cannot remain naive that we have a very real and cunning, calculating Enemy whose sole goal is to stop us from completing our divinely-allocated objective. Just because we can see the finish line of our race, doesn't mean there won't be pitfalls, peril, and dangers to deter us along the way. It is the wise that proceed boldly, but with wisdom.

Therefore, one who hyper-focuses on the safe, comfort zone of Christianity may only reach a surface level of faith; a level that is most likely being greatly challenged in recent months. We can't always "lie down in green pastures". Sometimes we find ourselves walking in "the valley of the shadow of death" [as so many have experienced in the last two years]. It's easy to rejoice in our faith when we're standing on the top of the mountain, and the view is one of only sunshine, and speaks primarily of God's beauty and grace. But what would your reaction be if you suddenly found yourself plunged into darkness and you couldn't see evidence of God anywhere? Is your trust gone? Do you give in to fear and despair? Do you feel powerless? Or do you simply refuse to acknowledge that it exists or that anything bad can happen?

I've often written that the 21st Century Church needs to return to its 1st Century roots. Those new Christians were walking on unstable ground. The Enemy had just lost his biggest weapon to keep mankind separated from God ... Death. And those faithful few were in the cross-hairs of his rage. They found themselves imprisoned; ship-wrecked; beaten; run out of town; and ultimately all were either scourged, crucified, beheaded with a sword, thrown in boiling oil, lanced by idolatrous priests and burned up in an oven, axed to death, thrown down from the Temple tower and then clubbed to death, stoned or beheaded.

If we call Jesus Christ our Savior, we must be prepared not only to enjoy the seasons of goodness, grace, mercy, and prosperity, but to endure the seasons of troubles, chaos, wickedness and evil. Jesus did not promise us that we would run our race without stumbling or coming under attack. He only promised that He would be with us through it all. I know there are many Christians who think what occurred in the 1st Century could never happen now; that we are destined for another "great awakening" in this nation; a national and worldwide revival; that the saints in Christ will escape to Heaven before suffering the devil's revenge; or that the evil on the earth will be defeated before Jesus returns. But that is not what the Bible says! I pray for an awakening ... that the fire of the Holy Spirit is kindled in the Body of Christ to their identity and their purpose in this hour of history! And I pray that their spirits are revived to know the power they have to resist the devil and take back dominion in their bodies, in their lives, in the Church and in the earth!

It all comes down to the Parable of the Sower, but the meaning will escape the "Surface Christians". Is your faith like the seed that is scattered on the top layer of the ground? Is it shallow and veiled in appearance? Or is it allowed to penetrate and inform your heart with the deeper things of God -- the things that have been known since the beginning of the world and down through the ages, but the modern Church ignores because it doesn't fit their paradigm or theology? Precisely because God sent our spirits to inhabit the earth in this particular time of history, I believe it is important that the roots of our faith grow deep and wide. We are going to need to be grounded in the knowledge of our heart and head, and particularly established in our spiritual abilities to connect to the power of God in Heaven.

Ancient civilizations as far back as the Sumerians [5500 years ago] wrote about the battles they witnessed between good and evil. Yes, God, Himself came to earth to reconnect with His creation and re-establish our relationship. But the forces of evil did not just submit and go away. The same strategies have been played out through the centuries, and while those stories and legends seem implausible for today, we would be wise to consider them -- not because it has an effect on our salvation -- but because the Enemy is still using the same methods and manipulations to deceive mankind.

The Church will say that everything in the past changed when Jesus brought the gift of Salvation. But the Church rarely acknowledges that He referred to the past when He said, "As it was in the days of Noah...". Furthermore, most Christians have never taken the time to study or understand all that was going on "in the days of Noah", or the vast history of mankind that led up to it. While the modern Church may think it has no significance for them, I [personally] want to see how my God worked in that situation so that I can take what He reveals to me and spend time with Him in His Throne Room. I want to receive a greater revelation to encourage and exhort others to hang on to their faith when the days on earth grow dark. The more I know about God [in my spirit and through His perspective], the better I can represent Him in all things coming on the earth. It's time for the Body of Christ to go from "surface" to "deep" in their understanding of themselves and God. The times demand it!

Next Time: A Deeper Understanding of Our True Identity

Romans 15:4      Whatever was written beforehand is meant to instruct us in how to live. The Scriptures impart to us encouragement and inspiration so that we can live in hope and endure all things.