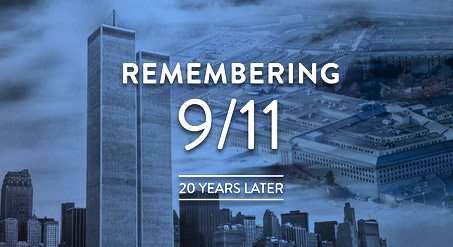 The memories of this day are most likely burned into the souls of everyone over the age of 30. We all remember exactly where we were twenty years ago this morning. Every American most likely has a distinct memory of that tragic day ... the ash-colored faces of panicking people rushing to escape the falling Towers behind them; the grief-stricken families wandering the streets of New York City in the aftermath, holding photos of their loved ones and hoping beyond hope that someone would tell them their son/daughter/father/mother/spouse had been spotted among the injured; the courage of those brave passengers on United Airlines Flight 93, who knew they were most likely sacrificing their lives to save those at the U.S. Capitol; the images of NYC firefighters atop mountains of rubble continuing to do their jobs after 343 of their comrades died trying to rescue those trapped in the buildings. And that's not counting the tens of thousands who have gotten sick or died from recovery efforts at Ground Zero.

The pain and loss of that day extends [as well] over 20 years of war; to all the families of all the wounded and deceased combat members of our military who answered the call to stop decimate the evil that had attacked our country. It is difficult to get a final figure of those who paid the ultimate price, but to each family whose lives were forever changed, the only number that matters is the one who came home to them -- whether in a flag-draped coffin, or a shattered body that took months or years to put back together. And there are many more whose wounds are not visible to the naked eye.

It is hard for me to fathom what our Father in Heaven thinks as He looks down on the consequences of decisions made over these past 20 years. I am aware that this stretch of two decades in our lives is but a moment on His divine timeline. And I know that there have been similar tragedies, atrocities, and wars throughout history. But my human mind asks, "God, where does it end"? Is the cost we've paid in human life, national treasure, loss of freedoms, and societal/cultural division worth it? "What is your perspective, Father"?

I know the Bible says there is a time to love, and a time to hate; a time for war, and a time for peace (Ecclesiastes 3:8). I know that God can lead us into wars that are righteous, but I also know that He will judge between the nations and will settle disputes for many peoples. They will beat their swords into plowshares and their spears into pruning hooks. Nation will not take up sword against nation, nor will they train for war anymore (Isaiah 2:3-4). Oh, how we long for that time!

I don't have the mind of the Father, but I think I perceive the heart of Jesus, who desires that we love our enemies. That's a hard thing to do when Evil comes knocking at your door. And the Apostle Paul tells us to never take our own revenge, but leave room for the wrath of God. I believe that God is a God of Justice, and there will be judgment against all who act out of evil hearts. But how do we reconcile these last 20 years, and where do we go from here?

There have been considerable changes inner nation since that fateful day in 2001. We are not the same country in so many ways. The unity we experienced in the days immediately following 9/11 seems like a fleeting memory. The Enemy has done everything within his power to divide us along economic, social, political and spiritual lines. We have mocked God's authority in covenantal marriage; the assigning of gender to our children; and have desecrated what is holy. And that's saying nothing of the greed and arrogance shown by our government leaders and corporations. The media and many ministries have fallen prey unto tempting deceptions, and the truth is often hard to discern.

But, I also want to mention that there is an entire generation that wasn't born when this evil came to our country. It is important that we never forget all those that died on that day, and in service to this country, so that we teach them this history. Let us take to heart, Deuteronomy 4:9, Only be careful, and watch yourselves closely so that you do not forget the things your eyes have seen or let them fade from your heart as long as you live. Teach them to your children and to their children after them.

And it is important to share the ideals that our flag stands for, and why it is important to so many when they see it flying high and proud. This latest generation needs to know it is about more than deciding whether to kneel or not at a football game. That flag represents the blood that has been shed throughout our 245 years of existence as a nation. We have been far from perfect and we have lost some of that national pride, and much more of our national identity, in the last 20 years. But I believe our God can return our hearts to Him and the purpose for which this nation exists.

I could go on and on about all the ways that we, as a nation, and as a people have gone astray. It all comes down to this: We have defied the Living God, while deifying the unholy alliance among ungodly men and institutions. It may look as if we've gone too far to be redeemed, but we must never forget that God is always faithful. He keeps His Covenants, Promises, and Steadfast Love with those who love Him and keep His commandments, to a thousand generations, and repays to their face those who hate Him, by destroying them. Judgment and Vengeance are His!

So, 20 years later, I want you to know that we have much to look forward to. Do not look at the world ... yes, the Taliban is still in power; Israel is still under attack; and the threats against our country may be even greater than they were in 2001. But we are still here, and there is still hope! On this 20th anniversary of the greatest national tragedy in our lifetime, we honor our dead and those who have displayed the American spirit of courage, bravery, and service. We recognize that there is a faithful remnant who will not bow down to worship evil; nor will they flinch at their duty; nor abandon their post. We have been called to a holy calling, and we have been raised up for this time and this season to display the power of the Almighty God of the Universe! We must trust that He has gone out ahead of us to establish our steps, and that we will witness His shaking in the land. We will be given the strength to stand in courage and boldness as we proclaim His strategies and plans that will lead us to victory!

Do not believe the false images or the defeat that the Enemy is feeding our hearts, eyes, and minds. Seek the Lord! His face is not hidden! He honors our grief over September 1, 2001 and all the years in-between. The souls of those who cry out from beneath the heavenly altar [for justice] will soon receive it! And we must not be afraid of what is coming. Remember, our God goes with us and fights for us. When we pray in the Might and Power of the Name of Jesus, we will have the opportunity to see something extraordinary in our nation! So, let's honor those who have paid the price for unrighteousness in the land; stand against those who would destroy what this nation stands for; and then look forward to what the Lord can do when we believe [in faith] and set our eyes upon Him! Get ready to witness His Kingdom, Power and Glory!

Isaiah 28:5-6      In that day the Lord Almighty will be a glorious crown, a beautiful wreath for the remnant of His people. He will be a Spirit of Justice to the one who sits in judgment, a source of strength to those who turn back the battle at the gate.