Christians: It's Time To Get Battle-Hardened! 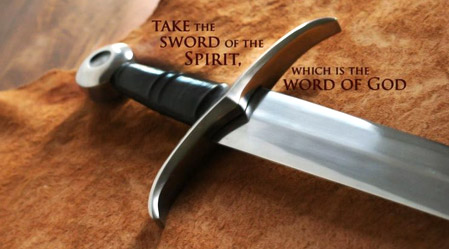 Mario Murillo, a pastor who boldly proclaims the power of Christ to transform lives and heal every area of affliction, recently posted a blog article titled, You Are Now A Wartime Pastor. Aimed at ministers and church leadership, Mario exhorts his fellow pastors to get on the front lines of this spiritual battle that the Enemy has brought to us. He calls for Christian leaders to no longer shy away from the evil that has permeated our governing authorities, our schools, our health care system, technology, and nearly every sphere of influence over our lives.

Yes, it is about time that pastors lead their flocks in the manner God ordained the Israelites as they crossed into the Promised Land. It is time for pastors to command the people to prepare for the spiritual war that is upon us and to take back all that has been lost through compromise, complicity, and collusion. But I want to take it a step further. If your pastor is not leading and calling out evil where it plainly exists, what is holding you back? We may not all carry titles that organized religion recognizes and honors, but we all have the potential to be the shepherd boy, David, or a Joshua, or a Jael. And the truth is, that whether you want to admit it or not, we should all be on a war footing against Evil; and in a state of readiness for this spiritual war that portends the End Times. While most have been waiting for a God-sent hero to take the lead, or to follow someone clearly in charge of commanding a spiritual army, the Enemy has steadily moved the line of encroachment until our backs are against the wall. The time of waiting is over. We must each take our battle positions on that wall and declare that the battle is the Lord's and the God of Israel will triumph!

The Lord is [even now] speaking to many in dreams, visions, and words of knowledge, saying, "The time has come to stand and engage the Enemy! The time is near for the cataclysm -- the violent upheaval in the world that the Bible prophecies -- and everyone must be prepared to recognize what is coming on the earth! Will you simply stand and watch? Or will you serve Me, the Lord of the Universe,  and obey My voice?"

To stick our heads in the sand, or to run away from the evidence that is before our eyes, is to deny what the Spirit is showing us. The nations are lining up for war. Famine and plagues are threatening to decimate vast populations. Even the elements of nature are warning that upheaval could be imminent; the La Palma volcano off the northwest coast of Africa is acting up, and should it erupt, 500 billion tons of rock will slide into the Atlantic Ocean, sending a 3000-foot wall of water careening across the ocean towards the United States and Europe, killing untold millions. And last but not least, Good has become evil and Evil is now called good. But the Lord will not abandon those in covenant with Him!

That's why it is important that we, who call ourselves followers of Jesus, realize that we must battle this spiritual war on two fronts. First, we battle from a position of spiritual protection, just as Psalm 91 instructs us. In the shadow of, and under the wings of the Most High and Almighty God, we battle from a place of protection and safekeeping; fighting in the confidence of one who trusts the Name of the Lord of Hosts to defend him. This is how the shepherd boy, David went into battle against the giant, Goliath.

But, we also battle from a position of God's power and authority in the physical. If we trust that the battle is His, we can be bold, even in the midst of our fears of what is coming. We can release ourselves to Him to be used for the advancement of His Kingdom here on earth, no matter what it looks like or what is required of us... because we know that it will be accomplished in HIS strength and power. He just needs men and women to work with [and through], and our agreement to be in covenant with Him to see His will done. We need not be afraid of the power of men on the earth; knowing that if God tells us to take that mountain, He will go before us and we will see our victory. We can defeat anything -- corrupt governments, empires, evil domains, demonic entities -- if we will just have faith and do not doubt. We can trust, as did King David, that God has trained our hands for war and our fingers for battle. He will stretch out His hand and fortify us because we know His Name.

But, as a watchman on the wall, I will tell you that now is the time to get settled in your spirit that this war is coming. Indeed, the opening salvos have been fired. Failing to respond is to hasten Satan's agenda, as written in the Bible. The Enemy's forces are on the battlefield and advancing rapidly. We know who wins in the End. But far too many Christians want to skip to the victory and are refusing to look at [or prepare for] the battle that precedes that glorious outcome. You can hope for an escape through the Rapture. But read the Good Book. I don't believe it says that! We will need to be Jesus's witnesses on the earth; proclaiming His Truth and renouncing the works and lies of Satan, the Antichrist, and the False Prophet; always pointing the peoples and nations towards Jesus, the Messiah and Savior of the World. We will battle on the earth, alongside Jesus, and His Heavenly Host, taking part in the final battle before the Millennial Kingdom is ushered in. We have lots of work to do as the end of this Age unfolds, and we need to get battle-hardened.

Our nation just declared the end of a 20-year war in Afghanistan. The nation is weary of war. But the truth is, wars never end... they just mutate into a different name, plan and objective. That's the way Satan has been operating for the last two millennia. Our soldiers may be weary and disillusioned [with good reason], but they are battle-hardened; experienced in combat and effective at fighting. As spiritual soldiers, we cannot afford to get weary, and we sure better get focused on sharpening our skills at fighting in both the spiritual and physical theaters of this war with Satan. Let us not be blind to the battle we're in, and let us be ready and equipped to fight on all fronts. The Glory of the Lord will prevail!

Psalm 18:39-41   For You have encircled me with strength for the battle; You have subdued under me those who rose up against me. You have also made my enemies turn their backs to me [in defeat], And I silenced and destroyed those who hated me. They cried for help, but there was no one to save them—Even to the Lord [they cried], but He did not answer them.