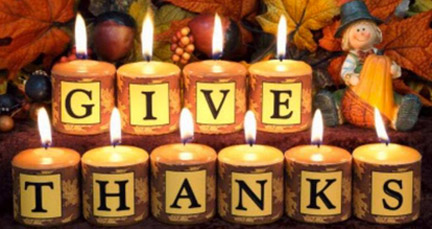 For most of us, this is a sentimental time of year.  We have fond and emotional memories of celebrating the holiday season with friends and family; it's those childhood memories that stir something in our souls and provide a connection to those we love. And I certainly intend to enjoy the bountiful blessings of this Thanksgiving with my family as I marvel at the provision the Good Lord has given us.

Since Thanksgiving is a particularly American holiday, I wanted to know more than I'd been taught in school about the origins of that historical event.  Surely, there's a deeper message in the Thanksgiving story than Squanto, corn and succotash, and the fall harvest.  Turns out there might be...

Thanksgiving became associated through the centuries with giving thanks to God for the harvests of the land. Throughout the Bible we find times of thanksgiving in which God's people come together and thanks has been offered through the gift of fellowship between all. And I find it quite significant that on this same day of November 26th, two hundred and thirty-one years to the day, our first President, George Washington, proclaimed a national day of thanks to the Lord for His care in guiding us to become a nation. Washington's Proclamation stated that on this day, the people of the newly established United States of America should be devoted to "the service of that great and glorious Being, who is the beneficent Author of all the good that was, that is, or that will be ...".

He reminded the people of all that God had done for them ... He  had cared for and protected the people of this country before they were even a declared nation, and He extended his significant and numerous mercies and divine intervention on their behalf until the conclusion of the Revolutionary War. The proclamation further called them to remember the peaceful union and prosperity they had enjoyed since that time. And here is what this nation so desperately needs to take from that 1789 Proclamation: President Washington declared this national holiday in remembrance of the "peaceable and rational manner, in which we have been enabled to establish constitutions of government for our safety and happiness, and particularly the national Constitution now lately instituted." He went on to thank God for the civil and religious liberty with which they were blessed; and the means they had of acquiring and diffusing useful knowledge; and in general for all the great and various Favor that God had been pleased to confer upon them.

Are we still that same nation? Are we still able to identify all that God has done for us? Do we still honor and praise His favor, our unity, our prosperity, and the Constitution that has successfully served us for these two hundred and thirty plus years? Are we still thankful and devoted to serving Him?

On November 26th, 1789, President George Washington urged the citizens of this nation to "humbly offer our prayers and supplications to the great Lord and Ruler of Nations, and beseech Him to pardon our national and other transgressions -- to enable us all, whether in private or public positions, to perform our duties properly and punctually -- to render our national government a blessing to all the people, by constantly being a Government of wise, just, and constitutional laws, discreetly and faithfully executed and obeyed."

It is my prayer that November 26, 2020 will be the day we return to the spirit of the declarations made on November 26, 1789. It is good to remember that Americans were learning how to come together in unity after a long, hard-fought war in which the populace was divided along social, religious, geographic, and ethnic lines. We face that same dilemma today. In the end, they had to find a way to come together and live united for the common good. And so do we. They began by recognizing that God had established this nation according to His will, and that a wise, just, and law-abiding Government would ensure the success and prosperity of the nation and its people. Do we still believe that's possible today?

What would President Washington think of the current state of the nation He was blessed to see established by the hand of God? What would he think of our means of acquiring and dispensing useful knowledge? Can our national government be called a blessing to all the people? And can it be described as wise and just; do the members of government discreetly and faithfully execute and obey our constitutional laws?

I know I sound skeptical, and I would venture, with good cause.  But I also believe that the same Lord and Ruler of Nations, and the same Almighty God who laid His hand on this nation at its founding has not abandoned us. Just as He answered the prayers of the Israelites who aligned themselves with His will, He stood for the colonists who saw America as their Promised Land and refused to bow down to the Pharoah of their day, the British government. Then, as now, our God created men to glorify Him; to praise Him for His goodness and justice; and to humbly thank Him for His Providence.

I have no doubt that there are millions who will join me, on this Thanksgiving day, with hearts full of gratitude; who will offer their adoration and praise to a merciful and gracious God.  And it is my prayer that we will continue to express our indebtedness to the Almighty God of the Universe each and every day.  I know that difficult days are forecast, but I also know that His love endures forever.  That is the thought that I will take captive and nurture in my heart.  I hope your Thanksgiving has brought you closer to the God who created you and this nation, and it is my prayer that all your days be full of thanksgiving and praise!

Hebrews 12:28-29     Therefore let us be grateful for receiving a Kingdom that cannot be shaken, and thus let us offer to God acceptable worship, with reverence and awe, for our God is a consuming fire.

Email ThisBlogThis!Share to TwitterShare to FacebookShare to Pinterest
Labels: Thanksgiving