A Nation Divided: Are We Like The Kingdom of Israel? -- Part 1 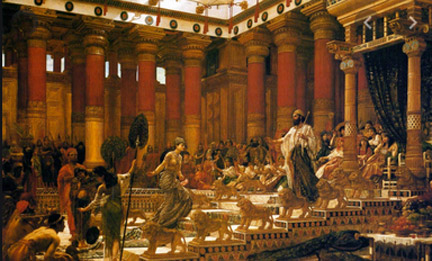 A Nation Divided ... that is how the media pundits describe us these days. And I will agree that there are some major differences in ideologies, political positions, and societal standards among our citizenry. Neither is this the first time that our nation has come to this crossroads. It's been 160 years since the United States faced a split like this one, and it cost us dearly. I pray we can take a step back before we find ourselves at the edge of that cliff again. And we are not the first nation in the history of the world to find its internal conflict resulting in a fractured people.

And this got me to thinking how God regards nations. I am no theologian, but I am a seeker after God's heart on a myriad of topics, and this is one of them. I won't bore you with my line of reasoning, but I will tell you where my thoughts have culminated. Interestingly, they align with the beginning of the Bible and again, at the end. So let's take a look at the beginning ... The Word makes it clear in Deuteronomy, Chapter 32, that God gave the nations their inheritance, and separated them, setting the boundaries of the peoples (verse 8). This chapter also makes it clear that God established Israel as a nation and chose them as His portion among the nations (verses 6-9). All this happened after Nimrod encouraged the people to rebel against God and they attempted to overthrow Heaven. So God separated them, giving them different languages, and assigning them to different governing gods.

And before you think I am theologically incorrect, I would refer you to Psalm 82, where God is standing in the Divine Assembly, and judging among the gods. In this powerful psalm, God is dressing down the lesser gods (whom He created and assigned to the nations) for not treating the peoples of the nations righteously or justly. The misunderstanding of this Psalm, combined with the mistranslation in Deuteronomy 32:8 that God set the boundaries "according to the sons of Israel", has led to centuries of confusion about God as the Most High God among the universe's multitude of lesser gods. You see, "sons of Israel" was originally written as sons of God in the Dead Sea Scrolls, and angels of God in the Septuagint. Our modern translations, which render the verse as sons of Israel, were written beginning in 1611 (and later), while the Dead Sea Scrolls were written in 150 B.C. and the Septuagint between 330 and 350 A.D., giving their translations precedence; at least to my way of thinking. So, I believe that this clearly shows us that nations were not only created by God, but how they came to be governed by the heavenly authorities established over them, and why all this is important to God. [NOTE: I could write an entire series of blogs on this concept, but for this discussion, I simply wanted to establish how God regards the nations].

So, let's take a look now at what is revealed about nations at the end of the Bible. In Revelation 21, the Apostle John is given a vision of the New Heaven and Earth, and the New Jerusalem, where the glory of God has illumined it; and the Lamb, Jesus Christ, is its lamp and light. The Bible says in verse 24, "The nations [the redeemed people from the earth] will walk by its light, and the kings of the earth will bring into it their glory". And in Revelation 22:1-2, John is shown a river of the Water of Life, beside which is growing the renewed Tree of Life, whose leaves "were for the healing of the nations". This makes it obvious [to me] that God desires nations to be filled with redeemed servants of God, and that He has established a new Tree of Life by which nations will be healed and restored.

So, what are we to take away from these disclosures in the Word of God? Should we pray for our nation to receive healing and restoration? Or are we doomed to follow the path of the ancient kingdom of Israel, who became a divided nation and ultimately went into physical and spiritual captivity? Can we learn from the mistakes that led to the northern nation of Israel and the southern nation of Judah; and can we see any similarities between their history and how ours is playing out? Let's consider a few things and then decide how we should pray for reconciliation in our land...

If you know your Bible history, then you are aware that the ancient kingdom of Israel became divided shortly after the death of King Solomon. It would be easy for us to surmise that his son, Rehoboam, failed at preserving the kingdom that his grandfather, David, had established, and that his father, Solomon, had expanded. But a closer look shows that Solomon actually set the eventual division of Israel into motion. An excellent publication by Liberty University faculty member, Wayne Brindle, educated me on all the issues that led to the dissolution of the kingdom of Israel. And I will endeavor to present a condensed argument that our own nation is in serious jeopardy of making the same mistakes. [You can download the presentation in its entirety by clicking here].

The immediate image of the Kingdom of Israel under Solomon's reign is that it was idyllic - a time of peace and prosperity. He built a Temple to God that was beyond compare. It is described in the Bible as having walls that were lined with cedar, on which were carved figures of cherubim, palm trees, and open flowers, which were overlaid with gold (1 Kings 6:29-30). Chains of gold further marked it off from the Holy of Holies. The floor of the Temple was of fir overlaid with gold. You get the picture, right?

His accomplishments were known around the world, and he was sought after for his wealth of wisdom. Even the Queen of Sheba traveled for a state visit with King Solomon. He forged alliances with powerful nations and spent lots of money on fortifying the cities of his growing empire. And that required a standing army, with thousands of horses and horsemen -- all of which required enormous amounts of food and provisions. He developed comprehensive programs and built not only the glorious Temple of gold, but his own palace and other magnificent structures that befitted his status. All this at the expense of the twelve tribes of Israel, who made up the citizenry. So, how did he finance all these expenditures? The primary source was taxation, of course!

But it seems that Solomon played favorites; the taxation was not spread evenly among the different tribes. In fact, if you read 1 Kings, Chapter 4, you will get an idea of how much it would cost to support Solomon's lifestyle. You will also discover that every tribe but Judah is called upon to foot the bill. Solomon was a member of that tribe and apparently he was not a proponent of economic equality. And his partiality towards the region of Judah found him taxing the northern regions of the kingdom more in order to build defenses for the southern part of the kingdom, where Judah existed. For all his wisdom and resourcefulness, [upon his death in 931 B.C.], he left his son, Rehoboam, with a diminished treasury and a "ripe for revolt" constituency in the northern part of the kingdom. Sound familiar? In the next post we will take a look at how this plays out for the troubled kingdom, and how the effects of Solomon's apostasy against the Lord results in judgment. Are we due for a similar fate?

Proverbs 29:2    When the righteous increase, the people rejoice, but when the wicked rule, the people groan.