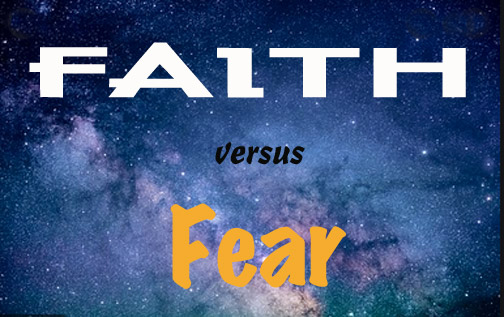 Before, I get to the points I want to make in today's blog, I want us to revisit a brief passage in 2 Chronicles 16 about Asa, the fifth king of the Kingdom of Judah. The Bible says that "in the 36th year of his reign, he developed a disease in his feet". It says that although "this disease was severe, yet even in his illness he did not seek the Lord, but [relied only] on the physicians". The demise of Asa is mentioned in a very short verse immediately following his diagnosis: "So Asa slept with his fathers [in death] the 41st year of his reign." What can we learn from this brief history?

I am increasingly finding myself on the fringe of society; even among my fellow Christians. As we continue to swirl around in this "Covid stew of confusion", I am amazed at how easily led some people are to the spirit of fear. Charisma Magazine ran an article that really spoke to my heart, and I think shows us how some of us could identify with King Asa. The article was reflecting on the various comments on Facebook regarding how best to traverse the contradictory information we receive from the media on how to defeat the pervasive Coronavirus.

One commenter said, "Show me the verse in Scripture that says God heals everything except Coronavirus". That got me to thinking about what Christians believe when it comes to how best to react during this pandemic. Depending on where you live, local authorities across the country have differing opinions as to what our behavior should be. Responses range from mandating we shut everything down, to more lenient policies of opening up businesses while maintaining common sense precautions. When is it okay to go without a mask? Is it really necessary to wear one while driving by oneself in a car? Even the Doctors and Scientists can't agree on the optimum solutions to Covid!

Some advocate six more months of shutdown and quarantine, with schools closed and everyone locked away in their homes; while others say we must adopt a "herd immunity" mentality, whereby everyone eventually becomes exposed to the disease and the virus dies out, so to speak, as people get the virus and recover. But even that solution is not universally agreed upon. Do you attain herd immunity through vaccinations which have been rushed into existence, or do you achieve it through natural infection? You can see why there is so much stress and anxiety in the population. But we Christians are not supposed to resemble the general population.

So, why do so many Believers turn to Science and Doctors for deliverance from this virus, rather than God? Perhaps the answer lies in Matthew 13:58, "And [Jesus] did not do many miracles there, because of their unbelief." As Christians, do we turn to the Doctor for a magic pill or procedure [or vaccination] to cure us before we turn to Jesus, who showed us that the power of God to heal is in us? How many, who call ourselves Believers, are afraid to walk among the general population without a mask? I'm not talking about being foolish and subjecting yourself to the company of someone obviously infected and suffering from Covid, or any other communicable disease, for that matter. I'm talking about being so paranoid that you avoid people all together or refuse to attend church or family outings because you can't "safely distance yourself"? What happened to our faith in believing our God is who He says He is? When did our unbelief begin to shake the very foundations of our faith? And when did the so-called "facts" from the so-called "experts" exceed our confidence in God's power?

I choose to believe the Word when it says that I abide in Christ and He abides in me. To me, that means that I have a life-giving connection with Him; He lives in me, and I live in Him. So when I leave my home, I picture myself stepping inside the realm that is Christ, where Covid cannot touch me. And while I trust in the medical advice that Zinc, Vitamin D3 and Vitamin C are powerful fighters against the virus, I also see God's Living Water continually flowing through my lungs, washing away anything that might try to attach itself. Plus, I anoint my lungs with holy oil so that the virus is unable to become lodged in my lungs. And, of course, I always keep my spiritual armor on, and my shield of faith in position, along with the Sword of the Spirit at constant readiness.

I know there are some, even among the Christian community, who would claim I am hopelessly naive, at the least, or insensitive and careless of others, at worst. But I identify more with the Canaanite woman who approached Jesus to get healing for her daughter, than I do King Asa. That woman was willing to accept the bread crumbs from the Master's table, believing that even the smallest portion of what the Lord offers is enough to receive a miracle for her daughter. And yet, do you know how much that offended Jesus's disciples? It's no different today! I know that my belief in Jesus has offended the unbelief in the Doubters. I know that my confident faith in Jesus is seen as foolish and potentially threatening to those who walk in fear. I know, because I have seen the looks of disgust as I remove my mask immediately after exiting the grocery store; or when I have to pull it down to take a breath of fresh air instead of feeling confined by a piece of cloth that has not been proven to stop the spread of the virus anyway.

Personally, I have chosen to wage war against this virus in the Spirit, refusing to give in to Satan's spirit of fear, and instead, opting to walk in the promises of Jesus. Throughout the Book of Matthew, Jesus shows us time and again that He healed everyone who came in faith and believed that He could heal them. It was their unbelief that caused them to doubt if healing was possible, and ultimately kept them from seeking Him.

I choose to live like the Canaanite woman, employing a supernatural faith that miracles and wonders still exist today. No weapon formed against me can prosper and no plague shall befall me as I live in the secret place of the Most High God and abide under His Shadow! I will trust in His protection and His provision. That doesn't mean that I will ignore safety measures or put anyone else needlessly in harm's way. I will continue to do the smart things that ward off all infectious disease. But I will also not give in to another's fear or worry that comes from their faithless unbelief. Neither will I be deceived by faithless Science or faulty human wisdom. I serve a supernatural God from whom all blessings flow, and I live in His Kingdom system, not the world's. Unlike King Asa, I turn to the Lord first, instead of putting my faith in man. Anything less does not honor the One who has defeated Death.

Psalm 73:28  But as for me, it is good for me to draw near to God;
I have made the Lord God my refuge and placed my trust in Him,
That I may tell of all Your works.