Kingdom Ambassadors and Ministers of Reconciliation

In yesterday's post I made the statement that I believe God will draw forth a Remnant in these days as individuals respond to the move of the Holy Spirit in their lives -- even in the midst of the chaos. Furthermore, people will be drawn to their message and souls will be won for the Kingdom. And I also asked the question, "So where can we go?" and answered it -- anywhere the Lord sends us. So, today, I want to share the testimony of Dr. Charles Karuku and his wife, Pastor Lindsey Karuku. They personify the Remnant and its willingness to obey the voice of God.  Here is their testimony:
As Dr. Karuku was ending a 40-day fast in late May, he heard the Lord tell him that on the day of Pentecost, He would do a great thing. His wife, Pastor Lindsey, woke up that same morning of May 30th and confirmed that she had received the same message. The day their fast ended is when the riots broke out in Minneapolis over the death of George Floyd. They knew that the next day was the Day of Pentecost, and they needed to be on that ground where George Floyd died, and they needed to go and proclaim the name of Jesus Christ, bringing a message of unity. They were to start a movement of unity amidst the racial division that was so prevalent.
When they arrived and walked the area, praying over it, buildings were still burning; there was smoke everywhere; the National Guard had been called up; and businesses were boarded up and shut down. The protests and riots were in full swing. 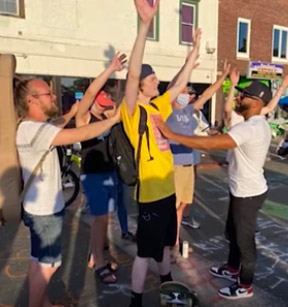 But NOW, the spot where Mr. Floyd died is a memorial in his honor and has been declared sacred and holy ground; a place of true reconciliation between people of all different colors. It is a place where praise and worship exist; baptisms and healings abound; and peace is in the atmosphere. A military veteran, who had been deaf for 15 years, had his deaf ear opened instantly by God. People are being delivered, baptized in water, receiving salvation, and giving their hearts to Christ.
Dr. Charles Karuku says the Body of Christ is coming together for the Kingdom of God; crying on each others' shoulders and bringing interracial healing and reconciliation. Over 50 ministries and churches have set aside their denominational and doctrinal differences to come together to bring the Light of Jesus Christ into the city of Minneapolis; and they so desperately need it.
Pastor Lindsey Karuku added that it is not just churches; it is individuals who are stepping up as Ambassadors of the Kingdom of God and riding the waves of the people who have been praying and sowing seeds into this area for generations. The goal and the significance of this movement is to see racial reconciliation in this generation. Praise God that it would be so! What an amazing testimony and an illustration of what the Ekklesia should look like! I bless these two Ambassadors and pray that this movement of individuals responding to the voice of the Lord sweeps this land.
If we hope to achieve their goal in this generation, the Body of Christ must become Kingdom Ambassadors and Ministers of Reconciliation. But can we as a society, agree on what that reconciliation should look like? Webster's Dictionary defines reconciliation as "the restoration of friendly relations; the action of making one view or belief compatible with another". Simple enough to understand, but I doubt that is going to appease the generations of prejudice, discrimination, and antagonism that exist between the races. Secular society would probably define reconciliation as the urgent need for social justice. 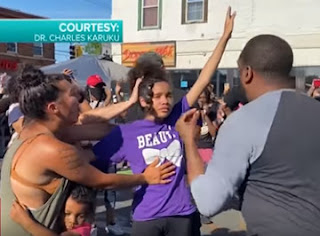 But how does God define reconciliation? I would tell you that it involves more than forgiveness between the races. It takes two people to reconcile; only one to forgive. In the Old Testament, reconciliation was the covering over of sin with rituals of sacrifice, called atonement. In the New Testament, reconciliation is the restoration to the Divine favor of God when sinners repent and put their trust in the substitutionary death of Christ. Man changes -- is purged of sin -- and reconciliation removes God's displeasure towards us and our alienation from God. It purges our hostility towards each other, and it changes our enmity towards our fellow man to friendship.
Social justice alone won't achieve the goal of racial reconciliation. We must recognize our need to be reconciled back to God before we can be reconciled to each other. So how do we get there? By doing exactly what the Karukus did ... they fasted and prayed and were obedient to do what they heard the Lord tell them. I can assure you that God is waiting for people with hearts willing to be His Ambassadors and Ministers of Reconciliation. He is looking for Believers with the compassionate and merciful heart of the Good Samaritan who tended to the wounds of the Jewish man he found robbed and beaten on the road. Although the Samaritans and the Jews despised each other, the Samaritan was deeply moved by the Jew's afflictions and cared tenderly for him, paying for him to stay at the inn and recuperate while he resumed his journey. He rose to a higher level of compassion and mercy rather than the dictates of social justice that demand equality.
We, too, must appeal to the higher power of God who is longing to whisper to us in the middle of the night and tell us His plans for reconciliation between the human beings that He has created. This testimony coming from Minneapolis is evidence that God is in the midst of the chaos that Satan is instigating. It is evidence that He is moving among His Remnant. And it is evidence that we Christians can truly have an impact on the lost and the hurting. You won't hear this reported in the mainstream media, but I can guarantee the angels in Heaven are shouting with joy and praising the Name of the Lord! And I thank our Father in Heaven for this ray of Light in all the darkness. Hope is rising from the smoke and ashes of Minneapolis. May we reconcile with each other as we continue to be witnesses of the Kingdom and our reconciliation with God Almighty. Hallelujah!
2 Corinthians 5:19    That is, in Christ God was reconciling the world to Himself, not counting their trespasses against them, and entrusting to us the message of reconciliation.

Email ThisBlogThis!Share to TwitterShare to FacebookShare to Pinterest
Labels: God's Revelation, God's Voice, Gospel of the Kingdom, Kingdom of God