Who Will Be The Remnant? 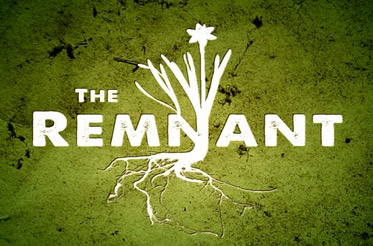 WARNING: I'm going to take you on a wild ride today; and my words will most likely be difficult for you to accept. But I ask that you read to the end of the post, and it is my hope that you will ultimately be encouraged.
Popular among our Christian vernacular these days is the word remnant; a concept that there will be a bold group of Christians who will rise up and be obedient to God's call on their lives, defending His Kingdom on earth and carrying out His will in the midst of great opposition and persecution. The remnant will persevere and endure until Christ returns! In effect, we see the remnant in purely Christian terms.
As a result of much study in the Old Testament, I have been able to see that God's plan to carry out His redemption for mankind has always been fulfilled through a remnant. So, it makes sense that the final fulfillment of that plan would be carried out by a remnant, too. Following me, so far? But where is the Biblical evidence that the final remnant of the Ages will be Christians?
Let me build my case for asking that question ... The first mention of a remnant in the Bible occurs in Genesis 45 when Joseph, who was sold into slavery by his jealous brothers, has prospered in Egypt to become the "father of the house of Pharaoh, and ruler over all of Egypt". His brothers [not recognizing him] appear before him to buy food for their starving families and Joseph reveals himself to them, telling them, "God sent me before you to preserve for you a remnant on earth, and to keep alive for you many survivors." Here, we get the idea that a remnant is a group of people destined to survive calamity and catastrophes. And the people of Israel were to be a surviving remnant throughout history. They repeatedly suffered major trials and tribulation that brought them to the brink of extinction, but remained the people whom YHWH, in His mercy, spared to be His chosen people.
Many of the prophets of the Old Testament prayed for the remnant of Israel to survive their circumstances. Isaiah prayed for the remnant which would be left after the Assyrian invasions. Jeremiah prayed about the plight of the remnant of Jews who fled to Egypt after Jerusalem's capture by Nebuchadnezzar. Micah prophesied about a remnant of the Jewish people who would return after the Exile in Babylon. Zephaniah identified the remnant with the poor and humble of Israel. Zechariah prophesied that a remnant would be present at the time of the coming of the Messiah's kingdom; a remnant that would be put into His fire, refined, and tested. "They will call upon my name, and I will answer them. I will say, ‘They are my people’; and they will say, ‘The Lord is my God’” (Zechariah 13:9).
So, why am I taking the time to point out the history of the Jewish remnant? First of all, I want you to see what Jesus says in Matthew 15. If you will recall, a pagan Canaanite woman approaches Him about healing her daughter of oppression by a demon. But what is Jesus's response? “I was sent only to the lost sheep of the house of Israel.” Did you get that? How many of us, in our Christian faith, have believed that Jesus initially came for all men? Yes, ultimately, Salvation and the Kingdom are offered to all men, but only because the Jews rejected Him, and He later appeared to Paul on the road to Damascus and instructed him to take it to all men! But can you accept that God still has plans to use a remnant of the Jews?
So, if you're thinking, "Well, the Jews rejected Jesus as the Messiah, so how can they still be a remnant used by God? Paul addresses this in Romans 11. We must remember that the Early Church existed of both Jewish and pagan converts to "The Way" [faith in Jesus Christ as the Son of God, who brought Salvation and the Kingdom to earth]. This faith was not yet identified as "Christianity". So as Paul travels to these small home churches, preaching the Good News of the Kingdom [which requires Salvation to enter into it], he identifies himself as a Jew when he lays out God's plan for all mankind.

Speaking to his fellow Jews in Romans 11, he says, "I ask, then, has God rejected His people? By no means!...  Do you not know what the Scripture says of Elijah, how he appeals to God against Israel? 'Lord, they have killed your prophets, they have demolished your altars, and I alone am left, and they seek my life.' But what is God's reply to him? 'I have kept for myself seven thousand men who have not bowed the knee to Baal.' So too at the present time there is a remnant, chosen by grace.... What then? Israel failed to obtain what it was seeking. The elect obtained it, but the rest were hardened, as it is written, 'God gave them a spirit of stupor, eyes that would not see and ears that would not hear, down to this very day.' So I ask, did they stumble in order that they might fall? By no means! Rather, through their trespass salvation has come to the Gentiles, so as to make Israel jealous.  Now if their trespass means riches for the world, and if their failure means riches for the Gentiles, how much more will their full inclusion mean!"
Then Paul switches audiences. In Romans 11:13, he says, "Now I am speaking to you Gentiles. Inasmuch then as I am an apostle to the Gentiles, I magnify my ministry in order somehow to make my fellow Jews jealous, and thus save some of them."
And in case this all sounds too mysterious, guess what? Paul actually addresses "the mystery of Israel's salvation [or restoration as it is called in the Aramaic translation). Continuing to speak to the Gentiles in 11:25-29,  he says, " Lest you be wise in your own sight, I do not want you to be unaware of this mystery, brothers: a partial hardening has come upon Israel, until the fullness of the Gentiles has come in.... As regards the gospel [of the Kingdom and Salvation], they are enemies for your sake. But as regards election, they are beloved for the sake of their forefathers. For the gifts and the calling of God are irrevocable." I want you to understand that when God declared in Genesis 45 that there would be a remnant of Israel on the earth for "many survivors", He is declaring that there would always be a remnant of Israel as His chosen people. They would survive being taken into captivity by the Assyrians, the Babylonians, the Persians, the Greeks, the Romans, and the Nazis.
And will Israel truly be restored to their original position and purpose? Will they be the ones to reveal the Most High God to the world as God intended? As Paul reveals, "God is more than ready to graft back in the natural branches [Israel] when they turn from clinging to their unbelief to embracing faith... they are still greatly loved by God because their ancestors were divinely chosen to be His. And when God chooses someone and graciously imparts gifts to him, they are never rescinded."  And the prophecy of Isaiah will be fulfilled! "Coming from Zion will be the Savior, and He will turn Jacob away from evil. For this is My covenant promise with them when I forgive their sins.” God will make sure He has a remnant of Israel to lead the world to knowledge of Him!
That is made clear in Revelation 7, when Jesus returns to establish the New Heaven and New Earth: "After this I saw four angels standing at the four corners of the earth, holding back the four winds of the earth, that no wind might blow on earth or sea or against any tree. Then I saw another angel ascending from the rising of the sun, with the seal of the living God, and he called with a loud voice to the four angels who had been given power to harm earth and sea, saying, “Do not harm the earth or the sea or the trees, until we have sealed the servants of our God on their foreheads.” And I heard the number of the sealed, 144,000, sealed from every tribe of the sons of Israel".
I tell you all this because I want to be sure that we Christians understand that we have not replaced nor surpassed the remnant of Israel as God's chosen mouthpiece to lead a lost world to Him. Yes, we are grafted in, and until the fullness of that remnant comes to fruition, we have been assigned to carry on the Gospel to the world. Can it be said that there is only a remnant of us that see God's plan, or a remnant of us that are carrying the true message of the Gospel of the Kingdom? Of course! In that sense, a Christian remnant exists and is very important to God's plan.
But I would love to see us recognize that there is a growing remnant of Israel that exists now, and through them God is growing closer to execution of His ultimate plan. There is a growing number of Messianic Jews in Israel and around the world that have been unblinded and see Jesus as their long-awaited Messiah. However, Orthodox, Conservative, Reform, and Reconstructionist Judaism has rejected them and they are outcasts. Yet this remnant of Jewish believers is the HOPE of Israel and the Jewish race, and God's grace is empowering this modern remnant to fulfill their destiny. Their numbers are growing and the remnant of Christians who see and understand this are standing together with our Jewish brothers. In the midst of the Enemy's latest plans to discourage and dishearten us, we ought to be celebrating that YHWH is once again preserving a divinely chosen remnant of Israel unto Himself. This foretells that the arrival of the Lord and Savior of all mankind. Hallelujah!

Isaiah 27:6    In those to come, Jacob shall take root and Israel shall blossom and put forth shoots and fill the whole world with fruit.

Email ThisBlogThis!Share to TwitterShare to FacebookShare to Pinterest
Labels: The Remnant