Are You Ready to Be Promoted?

I decided it would be interesting [and I hoped beneficial] to take a look back at the very first blog post I wrote on December 5, 2011. I wanted to see if there was an inkling that I would grow and mature in my faith, and if I recognized that God had a plan in place when He prompted me to begin the blog.
I wrote then, as I do now, to encourage people to walk in power and not fear; to strengthen their faith in times of dread and panic. At that time, I was focused on the confusion and calamity I saw occurring in my beloved home country, the United States. Now, nearly 9 years later, many of those issues have not only escalated, but the whole world seems to be on a fast track to destruction.
At the time, I wrote, "[My husband and I] felt heavenly promptings to re-evaluate everything in our lives....to prepare for economic hard times and radical changes in our society. And it scared me! But instead of giving in to the suffocating fear, I made a choice to face it. I would not give up that easily in all I believed in!" I went on to share the new knowledge I was gathering: learning what derivatives were; knowing all about the Federal Reserve and Central European Banks; learning how to bake bread from wheat I ground myself; starting to dehydrate food, and knowing how to properly handle a firearm." As you can see, I was pretty much focused on what I could see happening in the world, and was proud of my identification as an American.
But, there it was -- one little sentence that would make the difference in the path I would take... "I now read my Bible every day, not just on Sundays." That might seem an innocuous statement, but without taking that step, my life and my purpose would be very different today. You see, even though my line of sight was expanding to see the world from a Biblical perspective, I had no real knowledge of what God's ultimate purpose in all this chaos could be. I was rock solid in knowing that Jesus Christ was my Savior, but where was I to go from there? I certainly knew my church's doctrine, but as I began to read the Bible for myself, that line of sight went from being a straight line to what I was hearing from the pulpit to an ever-expanding vision of what God wanted me to know. And it often conflicted with what I had been taught.
I began seeing national and world events from a Biblical worldview, and I began to come into the fullness of my being: body, soul and spirit. Through my study, the Lord activated my spirit to receive greater revelation of who He was and why He came to earth. And with that, came the knowledge of who I was created to be! And it wasn't in some safe, respectable, and sizable position in the world. 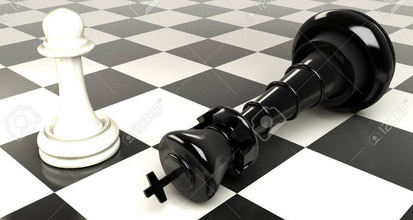