The Bible and Knowing The Lord

I write today's post out of more than a little frustration, along with a desire to speak honestly and candidly to my fellow Christians. When the Lord first starting bringing people to our table for an encounter with Jesus to receive Inner Healing from the Lord, they resembled the people Jesus ministered to .... people who either did not know Him or had wandered away from Him. They were people who were desperate to change the circumstances of their lives; they had reached a place where they were willing to take a chance on the advice of someone to come see us. And just like with Jesus, their encounter with the Lord healed them of their bondage and torment from the devil, and they were willing to seek Him and the Father.
But these were people who did not feel welcome in the Church; did not feel comfortable sharing their wounds with those who might look down upon the secrets they had been careful to keep hidden all their lives. After Jesus set them free, they were eager to be discipled and learn more about Jesus. We emphasized getting to know Him through His Word and weekly Bible studies in the Book of Matthew showed them a whole new way to live, and the Word spoke Truth and Hope into lives that were ready to receive them.
Time has progressed, and a reputation we did not seek began to bring more "churched" people to our table. And as we have said over and over, people in the Church are as much in need of Freedom in Christ as the un-churched. Many are wonderfully Saved, but tormented in soul and spirit from the wounds that have kept them from walking in their full purpose and identity in Christ. And rest assured, we make no distinction between any person that finds their way to us for healing with Jesus. He died to take away everyone's pain, and we are only too happy to be obedient and provide a way for them to receive Him. But here is where my frustration comes in...
We end every session with reminding the Beloved that although they have received blessed freedom from the wounds of their past, the Enemy will try to use the same tactics to bring them back into bondage. They must be prepared to recognize those lies and schemes; they are the same tactics that have worked all these years. And when they discern them, they need to identify the lie that's being whispered ("you're worthless", " you will fail again", "you're not worth loving"; whatever it is) and verbally renounce it and declare the truth from the Word of God ("He loved me enough to send His Son that I might have eternal life", "I am God's Temple, and His Holy Spirit lives in me", "I am a son or daughter, and an heir through Jesus Christ", "I was wonderfully and fearfully made in the image of my God"). We teach them that the Devil is a liar and the Father of all the lies they've been hearing their entire lives about who they are, and that's why it is important to take every thought captive, as the Bible tells us to do; especially those lies. 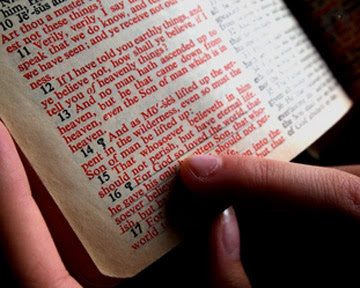 These are very simple instructions, backed by the Bible, and we emphasize them as an effective way to keep the freedom one receives from an encounter with the Lord. But, sadly, we are finding that so many Christians leave our session and do not follow what we've advised. And I'm beginning to think it's because they don't read their Bibles, and therefore the advice is not recognized as valid or needed. After all, they are flying high after being freed from painful wounds in their past, and they saw or heard Jesus take away their shame, guilt, anger, rejection, abandonment, pride and other sin-caused torments. Surely, nothing could take that away, right?
Yet, the first time the Enemy throws that familiar fiery dart, it strikes home. The old thoughts return; the lies that tell them they're a fake, or unworthy of the freedom they received. And they do not take those thoughts captive and declare that Jesus removed all that garbage and washed them in His Blood and Living Water. And just as Jesus warns us in Matthew 12, "When the unclean spirit has gone out of a person, it passes through waterless places seeking rest, but finds none. Then it says, ‘I will return to my house from which I came.’ And when it comes, it finds the house empty, swept, and put in order. Then it goes and brings with it seven other spirits more evil than itself, and they enter and dwell there, and the last state of that person is worse than the first. So also will it be with this evil generation.” But wait, they either don't read their Bible or don't take what it says to heart! In fact, I would venture that when the spiritual attacks renew, the last place the Beloved goes is to the Bible! They are confused. They know they were free. What happened? Why are they under attack again? It's as if our admonition to them fell on deaf ears.
Mind you, these are "good Christians"! They are at their Church every time the doors are open. They involve themselves in community projects; are on at least one committee; hold a title at the Church; and even declare, "The Lord told me...". Some even see and hear in the Spirit and have received giftings from the Lord, but don't really know what He expects of them -- because they haven't read their Bible to know what He commands. It makes them feel good about what they're doing; that they're working for the Lord in the Kingdom (without knowing what Kingdom Living is really all about, because they don't know what the Lord reveals through His Word and the Holy Spirit). But doesn't that make it all about them and not the people they are supposed to be ministering to and discipling?
I am reminded that Jesus teaches that there is a narrow gate and a wide gate. The wide gate is the easy route and many will enter through it. Is that a picture of the majority of the Church? Do they not understand that Jesus also spoke about another gate; one that is narrow and the way is hard that leads to life, and those who find it are few? And here is something else, that frankly should terrify every Believer... it is what Jesus says in Matthew 7:21-23, “Not everyone who says to me, ‘Lord, Lord,’ will enter the kingdom of heaven, but the one who does the will of my Father who is in heaven.  On that day many will say to me, ‘Lord, Lord, did we not prophesy in your name, and cast out demons in your name, and do many mighty works in your name?’  And then will I declare to them, ‘I never knew you; depart from me, you workers of lawlessness.’
These were people who thought they knew the Lord because they knew the Law, followed the rules they established for themselves and others, and had listened to Him teach. They probably had followed Him around Galilee, saw the miracles, and thought they were following His example. Is that any different from those today who listen to teachers and preachers and prophets and podcasts; who read books by best-selling Christian authors? Just as with the people Jesus spoke to, the act of using the Name of the Lord in the work you do for the Church does not necessarily mean you know the Father's will or His heart. He is revealed to us through the Word!
As you read and study the Bible, the Holy Spirit brings revelation. Yes, you can learn much from those teachers and preachers and prophets and books and podcasts. But the best way to know the Lord is by reading God's Word. And knowing Him means we continually seek Him, and we don't get comfortable with what someone else has told us about Him. We actually meet Him personally in His Word. That's when the real relationship happens. And it is not a relationship founded on religion or doctrine. The Bible is the key to understanding and knowing the Lord. Pure and simple. It's time Christians make the effort to read it.


Mark 7:6    And He said to them, "Well did Isaiah prophesy of you hypocrites, as it is written, 'This people honors Me with their lips, but their heart is far from Me;' "

Email ThisBlogThis!Share to TwitterShare to FacebookShare to Pinterest
Labels: Knowledge of God, The Bible