The History Of Christmas Revisited

This is a re-post of an article I wrote in 2016 on the History of Christmas. Back in 2013, I had begun doing research on where our Christmas traditions came from and was astounded to find so many pagan roots. I will admit that I was angry that the Church had promulgated so many of the false traditions as religious truth. I had to take my confusion to the Lord and let Him help me work through the feeling that I had been deceived and that God's truth had been compromised to promote a false story about what has become a "sacred" holiday to most Christians.
I will tell you that I became almost religious in my commitment against the holiday for the first couple of years. And I still am pretty disgusted at the commercialization and the exploitation of our faith. I still do not put up a Christmas tree, but I do put up my manger scene and some meaningful artifacts that celebrate the Lord's birth (even though it was not on December 25th, as you will see when you read this blog post). I have been able to reconcile my sentimental memories of childhood Christmases with my adult understanding of how the Enemy has manipulated man through the institution of this holiday, and I am now at peace with where I stand.
I can still enjoy all the Christmas movies and the lights and the songs of my childhood, but I don't pretend that they have anything to do with Jesus. I know that I am viewing them all through the lens of my flesh, while my spirit recognizes how my God wishes to be truly celebrated. I don't need to justify myself or my beliefs, and what someone else chooses to do is up to them. And that is a decision you will have to make for yourself as you read and contemplate the following information. I do not condemn anyone for their choices -- you must decide what you will do with this knowledge. And perhaps the best thing is to take it to the Lord, just as I did. Your spirit will recognize His voice, and let Him counsel and comfort you.

I know I will be accused of being a Scrooge during this Christmas season, but I must tell you that it is encouraging to me that our society and culture are beginning to deal in Truth.  With each passing year, we are accepting that the origins of our Christmas celebrations have less to do with Christ, and more with modern commercialization, ancient rituals and even pagan practices. While most Christians, like me, have no problem with honoring our Lord's birth this time of year, there are a growing number of Believers who recognize that Christmas, as we know it, evolved out of the Roman tradition of Saturnalia, a festival honoring their god of agriculture, Saturn, on the winter solstice.
The date of Saturnalia, -- December 25th -- was celebrated as "the birthday of the unconquered sun" and was also a convenient way for Emperor Constantine to combine his pagan Sun god worship  with his newly self-professed Christian faith.  It was also a way for him to exclude the influence of the believing Jews from the new Christian faith, by declaring the day as a Christ Mass. Though we now celebrate Christmas as the birth of Jesus Christ, we don’t know the exact date, or even the year of his birth. (Many scholars believe that it was in late September or early October, and associate it with the Feast of Tabernacles). And during Saturnalia, children would often be given gifts of wax dolls – an act with a rather macabre history itself; the dolls were used to represent human sacrifices that Rome had given to Saturn in the past as payment for good harvests. Boughs of certain trees and other plant matter were also common gifts during Saturnalia, and were used to represent bounty and good harvests. So, while I like the idea that gift-giving at Christmas time is associated with the gifts of myrrh, frankincense, and gold that were presented to the Christ child by the three Magi, the reality is that the pagan beliefs were the original impetus for gifts.
Legend has it that stocking stuffing is rooted in the charitable donations of Saint Nicholas, the forerunner to our Santa Claus.  Nicholas believed that childhood should be savored and enjoyed – but in a time where boys and girls younger than 10 had to work to support their families, this wasn’t always possible. So he decided to ease their burden, and gave what he could in homemade food, clothes, and furniture. The bishop even gave out oranges, which would have been very rare and expensive in Lycia, where he lived. The problem became where to leave these gifts so that the children would find them. According to legends, he then saw girls’ stockings hanging above a fireplace, and ol’ Saint Nick (to paraphrase) thought “Why not?”.  From then on, children would hang stockings up hoping that Saint Nicholas would visit them that night.
But there is another legend that pre-dates the good bishop.  The practice can be traced back to Scandinavian countries that still held their Pagan beliefs. Children would leave their shoes full of carrots, straw, or other similar foods for Odin’s mythic horse, Sleipnir. When Sleipnir ate the food, Odin would leave candy or other treats in their place.
Then there is the issue of wreaths and Christmas trees. Although many Christians might say these items are separate from belief in Christ, God still has something to say about our festivals.  Jeremiah 10:3-4 says, For the customs of the peoples are worthless; they cut a tree out of the forest, and a craftsman shapes it with his chisel. They adorn it with silver and gold...  In fact, Christmas was not among the earliest festivals of the Church.  Early Church fathers, Irenaeus and Tertullian, omit it from their lists of feasts, with Tertullian writing, “The pagan Romans clad their door posts with green and branching laurels.  In the Saturnalia, presents come and go. There are gifts and banquets … yet Christians should have no acquaintance with the festivals of the pagans.”  And then there is God, Himself, who says in Amos, Chapter 5, I hate, I despise your feast days... 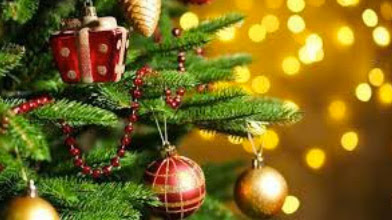 And we can't ignore that the evergreen was also known to have represented the same values to a variety of cultures, including the Egyptians, Chinese, and Hebrews. The worship of trees was also very common in European druidism and paganism. In Christian tradition, trees were often put up in December to serve the dual purpose of warding off the devil and allowing a perch for whatever birds still remained. Evergreen trees decorated with apples and wafers were also used in Christmas Eve plays during the Middle Ages to represent the tree from which Adam and Eve ate the forbidden fruit. Now, I know that no one will admit that we are worshiping our Christmas trees, here in the 21st Century.  But, if we were honest with ourselves, they have become idols.  True, we do not bow down physically before the Christmas tree, but when you consider that they have become a matter of the heart, and how much emphasis we put on them as a symbol of the time we say we are worshiping Jesus... well, sounds like idolatry to me.
Then there is the tradition of mistletoe, which has an interesting story.  The Greeks believed that Aeneas, the famous ancestor of the Romans, carried a sprig of mistletoe in the form of the legendary golden bough. In Eddic tradition, mistletoe was the only thing able to kill the god Baldur, since it had not sworn an oath to leave him alone. Among other pre-Christian cultures, mistletoe was believed to carry the male essence, and by extension, romance, fertility, and vitality. The history of its popularity as a kissing agent is unknown.
These are just some of our most endearing Christmas traditions, and I know that there are many of my fellow Christians who do not feel the same as I do about the holiday.  They will tell me, "Fine, I recognize that some of the origins of our modern Christmas celebration come from pagan rituals. But that's not what it means to me, and God knows my heart.  He knows that Jesus is the reason I celebrate Christmas". While I respect their decision, it's not that easy for me.  Because the worship of false gods and idolatry were intertwined with these rituals and festivals, my spirit has a tough time sharing a celebration of my Savior's birth with any other idol or deity.
The final factor for me is not what the celebration of the Christmas holiday means to me, but what does it mean to my Father in Heaven?  And I want to interject this thought ... Although there is no instruction in the Bible to celebrate the birth of Christ, I don't think He condemns us for wanting to honor our Lord and Savior. But, I don't think it pleases Him that we can so easily dismiss the connections between the Christmas holiday and its pagan roots. 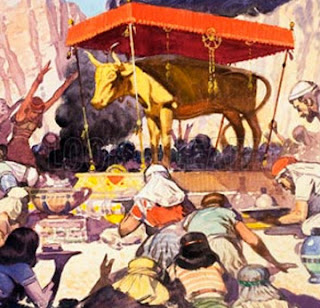 How is it any different than the justification the Israelites gave for worshiping the Golden Calf? Read Exodus 32:1-6, and see if there isn't a valid comparison.  Didn't the Israelites set something up for their pleasure, and declared that it was from God? Weren't they worshiping a representation of a pagan deity, and had the arrogance to say “it shall be a feast to the LORD”?  Didn't they celebrate, claiming they were thinking about God as they brought gifts, drank and made merry? Personally, this is what I think we do with the holiday of Christmas.  And I understand how difficult it is to separate our hearts (our flesh) from what pleases God.
Nobody enjoyed the emotions and sentimentality of the Christmas season more than me! And if I say, BUT GOD KNOWS MY HEART and my heart is focused on Jesus... aren't we then making it about US, and what we want, NOT what God has asked us to do?  Are we offending Him by celebrating our own man-made feast, rather than His appointed Feasts, and then saying it's about Him?
I know this is a tough subject, and I do not wish it to cause division in the Body of Christ.  It is a decision that must be made by each individual -- how you choose to honor the birth of Christ is something you need to be certain about in your spirit.  But you should be honest and uncompromising; don't let the Enemy convince you with sentimental memories and nostalgia. Don't let him combine man's pagan rituals with the holiness of the Christ child, and persuade you they are one and the same.  And one secular website even proposed this idea: "Christmas is the one time of year where everyone (or nearly so) is friendly, generous and gets along with each other, [so] does it matter the inspiration?"  (To read an article from this perspective, click here). In other words, why doesn't all mankind just ignore whether the inspiration for Christmas comes from the birth of the Christ child or from an assortment of rituals honoring a variety of false and pagan gods, and just all enjoy the merriment and good cheer?  That might be fine for the non-believer or agnostic, but if you are a Christian you must ask yourself this question ... Would God agree?

Matthew 15:8-9    This people honors Me with their lips, but their heart is far from Me; in vain do they worship Me, teaching as doctrines the commandments of men.
Posted by Pam Kohler at 6:30 AM