When "The Church" Does Nothing, Someone Else Will Write Our Laws

I wish I could take credit for the title of this blog post today, but this is actually a statement made by Dutch Sheets, a pastor and Executive Director of Christ for the Nations. And, oh, how prophetic is this statement becoming. It has never been made more clear than in the proceedings surrounding the AISD (Austin Independent School District) Board of Directors and their proposed curriculum for middle school students.
Texas Values is a website whose purpose is to preserve and advance a culture of family values in the state of Texas through Biblical, Judeo-Christian principles by ensuring that Texas is a state in which religious liberty flourishes, families prosper, and every human life is valued. But when they exposed Austin ISD’s plans to adopt a radical new pro-abortion and pro-LGBT sex-education curriculum for grades 3rd-8th, it was time to take a stand.
Texas Values reports that the curriculum, called "Get Real", was created by Planned Parenthood, the nation's largest abortion provider and encourages students to engage in "role-play" scenarios that would then be graded by a teacher. One situation includes two girls who act out as lesbians having oral sex; another situation encourages students to pretend to be drunk. Here are some other proposed scenarios: 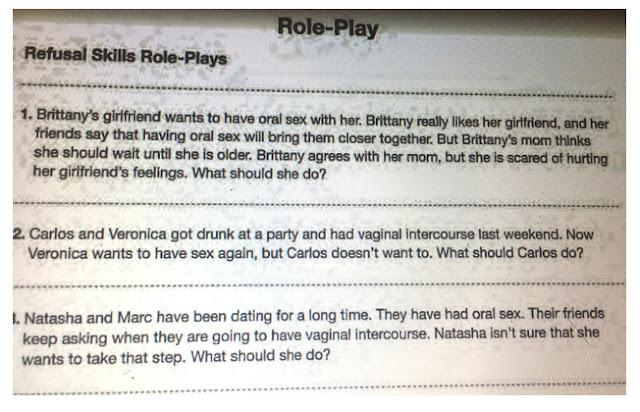 Students engaged in this curriculum are discouraged from using words like "mom and dad" or "male and female". The curriculum promotes the use of "Gender Inclusive Language", saying "It is important to avoid terms which refer only to "male" or "female" identities as this can limit their understanding of gender into binaries and can exclude children who may not identify within these identities. For example, when discussing family members or adults they may have in their lives, try not to only use terms like "mom" or "dad". Try integrating terms like "parents" or "guardians" to include children whose parents might not fit into "traditional" concepts of family structures. Additionally, when discussing topics such as unsafe touch, try not to use gendered examples. Instead of saying something like, "If a man tries to touch you", use the gender neutral term "person", or even "someone you may know".  Can you believe this?!?!
The proposed curriculum also suggests that students be given a sexual orientation vocabulary test on words like "pansexual", "bisexual", "asexual", and "homophobia". Texas Values also highlights some of their other concerns regarding this disturbing curriculum:
•  It teaches children how to enter into romantic relationships with adults
•  Promotes homosexuality and "gender fluidity" as early as elementary school
•  Teaches children that not having a crush in life means that their sexual orientation is questioning and indoctrinates them to choose a “sexual orientation” before they develop romantic attraction.
I have to say that as alarming as this proposed curriculum is, it is equally disturbing that we have even come this far in perverting our culture. I can remember back in the 1990's listening to Dr. Laura Schlessinger warning on her radio program that the North American Man/Boy Love Association (NAMBLA) was trying to infiltrate our public libraries with their pedophile and pederasty agenda and activism. And as morally offensive as that organization is, I am also deeply distressed over the lack of safeguarding and protection offered by "The Church".
Don't get me wrong, I am deeply proud of efforts by the Austin group calling themselves "Concerned Parents", along with Texas Values, and my Kingdom-of-God-minded friends at Luke 4:18 Ministries in Austin who showed up to protest these curriculum changes at the AISD hearing a couple of days ago. I praise the Lord for your faithfulness in representing the Kingdom of Heaven on earth! May He continue to strengthen your resolve as you battle against this "Beast System".
But I have to ask ... how did it ever get this far? Where has The Church been? And why isn't the Church standing toe-to-toe with these concerned parents? Oh, yeah .... there's that nasty 501(c)3 designation, isn't there? They can't get involved with anything that is aligned with State Government, such as school curriculum, due to the supposed separation of church and state.
So, can you see how serving two gods has allowed moral depravity to enter into our culture; and now our schools? But you see, Jesus never called for "The Church". He said He would build His "Ekklesia", which is supposed to be the righteous governing body of believers on the earth to promote and protect God's style of government -- His Heavenly government. But instead, The Church protects its own interests while our children are exposed to ever-expanding un-Godlike ideas and practices. How do you think our Father in Heaven feels about what our/His children are being introduced to? We will be held accountable!
So, I just want to finish by expressing this simple prayer: Father, I pray that You will strengthen Your remnant who have answered the call to rise up to their responsibilities as Kingdom citizens and stand for the innocence of these precious children. We see the agenda of the Enemy and we oppose it in the spirit and in the Board Room. We bind the spirit of Baphomet who yearns to ensnare children in his depravity and wickedness. We decree and declare that Austin and the state of Texas will be the forerunners in defeating this evil curriculum across our nation, and that the heavenly host will join Your remnant in this important battle. Furthermore, we plead the blood of Jesus upon the Board meeting next month. And in the power and authority given to all believers by our Lord and Savior, we bind the lies, propaganda, and money sourcing behind this curriculum, and loose the power of the Holy Spirit to reveal Your Truth and Your strategy to defeat this evil scheme. Thank you, in advance, Father, that You go before us in this battle in the state of Texas. We are trusting You in this important matter. Amen!

Mark 9:42     But if anyone abuses one of these little ones who believe in Me, it would be better for him to have a heavy boulder tied around his neck and be hurled into the deepest sea than to face the punishment he deserves!
Posted by Pam Kohler at 6:30 AM

Email ThisBlogThis!Share to TwitterShare to FacebookShare to Pinterest
Labels: Divine Judgment, Evil, Family, Our Culture, The Ekklesia, The Remnant