To these [men] He also showed Himself alive after His suffering [in Gethsemane and on the cross], by [a series of] many infallible proofs and unquestionable demonstrations, appearing to them over a period of forty days and talking to them about the things concerning the kingdom of God. 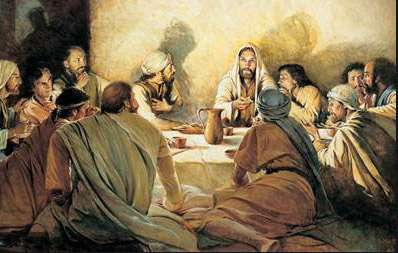 As I sit here ruminating on yesterday's 18th anniversary of the 9-11 attacks on our country, I remember what I was thinking that day; that all sense of security was gone. It was as if I had lost a sense of self and a part of my identity. It felt as if my world had come crashing down with the Twin Towers, and I would never be the same. I imagine that's exactly how the Disciples felt after Jesus's crucifixion.
For three years they had been walking with Him, being schooled in the Good News that the Kingdom of God had intervened in the world, and renewing their minds to think from that kingdom perspective. They had begun thinking of themselves differently, and had witnessed a new and exciting and powerful way to live life. But with the death of Christ, who were they now? How would they go on without His leadership and teaching?
But this verse in the first chapter of Acts tells us that Jesus still had some teaching to do, even after death. Upon His resurrection, He spent the next 40 days educating these disciples. But notice that Scripture is very explicit about what Jesus taught them ... things concerning the kingdom of God. How many of us have discerned this important piece of the narrative? The inspired Word of God wants to make it very clear; it's the establishment of the Kingdom of God on earth that was Jesus's prime objective in life and in death. So, Acts 1:3 tells us that Jesus, by a series of indisputable proofs and unquestionable demonstrations, continued to teach them about the kingdom of God for the 40 days before His ascension into Heaven.
In addition, it is essential to note the significance of the 40 days. The Acts 1:3 commentary in the Passion Translation says this: The number forty is significant, for it speaks of transformation and completeness through testing. Jesus was tempted in the wilderness for 40 days; the deluge during Noah's day lasted 40 days and nights; Moses met with God for 40 days on Mt. Sinai; Israel wandered for 40 years in the wilderness; and Elijah fasted for 40 days in his battle with Jezebel. Jesus spent 40 days appearing to His disciples to teach them that a day of complete testing and transformation had arrived. It took them 40 days to comprehend that Christ's kingdom was spiritual, not political, for they were still confused about His purpose for coming.
And He taught them with proof and demonstrations for those 40 pivotal days. Does the Bible give us any information about those 40 days? Paul tells us in 1 Corinthians 15 that Jesus appeared to Peter, then the remaining disciples; then to more than 500 men and women who had been His followers. What was that like? Obviously, this is a far few number than had been following Him during the three years of teaching to the crowds. Did they finally understand the concept of the Kingdom? Did they see the big picture?
Let's look at the significance of some of the things we know happened during those 40 days and see if we can glean more understanding of what the "Kingdom picture" looked like. First of all, let's start at the tomb. I think it is important to note that Jesus appeared to Mary Magdalene first, before Peter or any of the other disciples. That is hugely significant because in the culture of that time, women had no status. Yet Jesus chose to appear to one who was neglected and oppressed.
Also, Jesus gives us another subtle hint at the tomb. John 20:6-7 tells us that as Peter entered the tomb, "He saw the linen cloth lying there, and the face cloth, which had been on Jesus' head, not lying with the linen cloths, but folded up in a place by itself". At first, this might seem trivial, but according to Belief.net, in the tradition of that day, after a servant set the dinner table, he would wait, just out of sight, until the family had finished eating. If one of them was done, they would rise, wad up the napkin and toss it onto the table -- the signal to clear their setting. However, if they got up from the table, folded their napkin and laid it beside their plate, the message was "I'm not finished yet." The folded cloth served to whisper to those who listened, "I'm coming back".
I imagine that during those 40 days with His followers, Jesus laid out the Father's plan for them to continue His Kingdom work until He returned. There was plenty to share with them about what the prophets had foretold and the role they were to play in seeing those prophecies fulfilled. I find the account of the two men walking to Emmaus quite compelling. Jesus appears and accompanies them on their journey as they discuss the events surrounding a man called Jesus of Nazareth; a man they both proclaimed to be "a prophet mighty in deed and word before God and all the people". They recounted how the religious leaders had accused him and delivered him up to the Roman authorities to be crucified. They related how the women of this Jesus's company of followers had reported attending the tomb, only to find it empty, and angels announcing that he was alive! They shared their hope that he was going to be the Messiah that redeemed Israel.

I can just hear the frustration in Jesus's voice when He says to them, "O foolish ones, and slow of heart to believe all that the prophets have spoken!" Then, beginning with Moses and all the Prophets, He interpreted to them in all the Scriptures the things concerning Himself. But they still didn't know who He was! I believe it wasn't until Scripture says "they urged Him, Stay with us" that Jesus decided to dine with them, bless them, and break bread with them. He then removed the scales from their eyes and they recognized Him!
How often have we heard and read the Truth of God's Word about Jesus, but it isn't until we invite Him to come stay with us as we seek Him, that we receive a new revelation? And I can totally identify with those faithful followers as they proclaim, "Why didn’t we recognize it was Him? Didn’t our hearts burn with the flames of holy passion while we walked beside Him? He unveiled for us such profound revelation from the Scriptures!"
What I love about this conversation is that Jesus's role as Teacher did not end with His death -- not then, and not now! He continued to teach them about the Kingdom of God and their purpose in re-establishing it on the earth. And if we will let Him, His Word can do the same for us today in the 21st Century. Like with them, Jesus can strengthen our faith and restore our hope in His return and a righteous world. Jesus's final instructions to His followers hold the same importance for us: “go and make disciples of all nations” by sharing with the world the Good News that the Kingdom of God is here! He has left that same authoritative directive to us. And it has survived for 2000 years and its purpose has not changed. The Enemy has tried to destroy our calling by introducing spiritual conflict, and cultural chaos, but our Lord's orders to His faithful followers stands strong and true. It's all about the Kingdom and we are the heirs of the mission and the message. May we fulfill our purpose!

Email ThisBlogThis!Share to TwitterShare to FacebookShare to Pinterest
Labels: Gospel of the Kingdom, Kingdom of God