What The Prophets Had To Say About The Kingdom Of God

Recently, my husband and I spoke before a group of people about the Gospel of the Kingdom. It was such a spiritual high to see people recognizing (some for the first time) the importance of understanding Jesus's primary message, and to see the implications of entering the Kingdom of God for this generation.
It amazes me how the Enemy has been able to successfully hide this truth in these latter days of the Church Age. Of course, I understand why -- when Jesus came over 2000 years ago, He declared that Satan's kingdom was coming to an end. In John 4:31, the Lord said, From this moment on, everything in this world is about to change, for the ruler of this dark world will be overthrown.
The Good News that Jesus was re-establishing the Kingdom of God on earth was a sentence of judgment on the fallen world and meant that Satan's kingdom of darkness would soon be toppled. What's more, mankind [from whom Satan received his dominion of the earth through deception] would be redeemed, and death would be conquered by Jesus, Himself. Man would again be given dominion over the earth; to occupy it and hold it until Christ returned for His final judgment of Evil.
So, Satan had much to lose if men, who came to salvation through faith in the Risen Christ, ever learned of their restored power and authority and took back their dominion of the earth. So, it should not be a surprise that, slowly over the last two millennia, this truth of the Kingdom of God and our role as citizens of Heaven on earth, has been concealed and shrouded by false doctrines and flawed teachings within the Church. Satan has done a good job of infiltrating our seminaries and leading Church leadership down a path that has succeeded in birthing a powerless Body of Christ.
But equally amazing to me is that the truth was there all the time ... all we had to do was be diligent in reading and studying the Word. But again, the mantra in far too many 21st Century churches is that the Old Testament has been surpassed by a New Covenant and is no longer relevant. But Jesus says in Luke 16:16, The law of Moses and the revelation of the prophets have prepared you for the arrival of the kingdom realm announced by John. And now, when this wonderful news of God’s kingdom realm is preached, people’s hearts burn with extreme passion to press in and receive it. 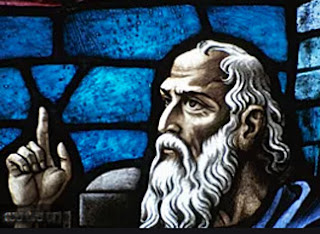 The prophets of the Old Testament revealed that there was a new kingdom coming; they prepared men to be on the lookout for it. And it came with Jesus. And Jesus said that when men hear the good news of this kingdom preached, they will burn with extreme passion to enter into it.
We need not doubt the words of the prophets in the Old Testament. They heard directly from God as men called to deliver God's promises of judgment and restoration. They were called to both warn of disaster coming from violation of the covenant with God, and to announce the blessings of a future messianic kingdom [preserving a descendant of David to sit on its throne]. And Jesus confirms this truth when He says, Do not think that I have come to abolish the Law or the Prophets; I have not come to abolish them but to fulfill them.
I don't know about you, but I find great hope in those words, and it makes the prophecies in the Old Testament so dear to my heart. Jesus says He came to fulfill them! He came to bring to perfection all that was written! So, let's rejoice in these hope-filled prophetic words of long ago:

Jeremiah 23:3-4.  YHWH will return to Zion to deliver His sinful [and wayward] people and equip them to extend His saving reign to the furthest points of the earth. Jeremiah expresses this prophecy with an image of God placing shepherds (a symbol of kingship) over His people in the context of bringing them (in a new exodus) out from the nations to which they have been driven ... Then I will gather the remnant of my flock out of all the countries where I have driven them, and I will bring them back to their fold, and they shall be fruitful and multiply. I will set shepherds over them who will care for them, and they shall fear no more, nor be dismayed, neither shall any be missing, declares the Lord.

Daniel 2:44. Daniel shares this vision of permanent restoration and sovereignty in a different way ... And in the days of those kings the God of heaven will set up a kingdom that shall never be destroyed, nor shall the kingdom be left to another people. It shall break in pieces all these kingdoms and bring them to an end, and it shall stand forever …

Daniel 7:13-14.  The image of an exalted and majestic king is firmly established; one that is approved and authorized by the Father ... I saw in the night visions, and behold, with the clouds of heaven there came one like a son of man, and he came to the Ancient of Days and was presented before him. And to him was given dominion and glory and a kingdom, that all peoples, nations, and languages should serve him; his dominion is an everlasting dominion, which shall not pass away, and his kingdom one that shall not be destroyed.

Habakkuk 2:14.  Adam’s dominion mandate will be fulfilled and restored through the dramatic saving work of God. Death is conquered at the Cross, and the Kingdom of God once more reigns on the earth  ...  In that day the earth will be filled with the knowledge of the glory of the Lord as the waters cover the sea.
As you can see, the Old Testament's prophets provided the context within which Jesus could declare that the "Kingdom of Heaven was at hand [had arrived]". Jesus said that He came to the lost sheep of Israel. They knew that YHWH was king, and had always been king of the earth. What they didn't know, or recognize, was that God, Himself, had broken into the world, through the appearance of His Son, in order to reclaim dominion and rule of the earth. What we have not known -- until those with "eyes to see" and "ears to hear" have re-discovered it -- is that through our faith in Jesus, we are to assume the roles of ambassadors, royal citizens, and sons and daughters of the King. We are to continue what Jesus started, putting the Enemy on alert that his time is ending; his kingdom no longer holds power over this earth, and we are rising up in a wave of believers walking in new identities!
I, for one, am grateful to the prophets of old for overcoming scorn, derision, captivity, and death to bring us the profound blessings of their written words. What crowns and inheritance they will reap on that glorious day when they stand before the Lord! May we honor their faithfulness with our own strength and courage, by declaring and preaching the Good News of the Kingdom of God to the whole world as a testimony to the nations. For Jesus says, "then the end will come". And all the obedient faithful proclaim, "Come, Lord Jesus!"

Thanks to Ligonier Ministries for referencing the Old Testament prophecies.
Hosea 12:10    I spoke to the prophets; it was I who multiplied visions, and through the prophets gave parables.

Email ThisBlogThis!Share to TwitterShare to FacebookShare to Pinterest
Labels: Gospel of the Kingdom, Kingdom of God, Old Testament Prophets