Is It Really This Simple?


Over a year-and-a-half ago, I was blessed to be a part of a Women's Retreat for female military veterans. Some of the wonderful benefits of this retreat were the "agape gifts" left at our place at the table at meal time, or on our pillows at night. One of those fortuitous little gifts has blessed me again, some 18 months later. 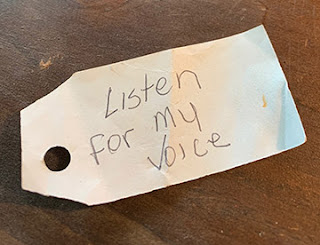 Yesterday, out of nowhere, a slip of paper fell from a book on my nightstand and I reached down to pick it up. It was one of the messages I received during the retreat, but it was the only one that I still have, and it simply said, "Listen for My voice".  Now, you might think that this sudden appearance of a slip of paper is an innocuous event, but I have been praying for more of this for quite some time -- to hear from the Father, and to act on His words, just as Jesus did. Jesus had intimate, detailed, thorough, and informative [instructive, edifying] conversations with His Father before He did anything in His ministry. When He was only 12 years-old, He knew His assignment was to "be about His Father's business". The Passion Translation says He understood that He was to be in His Father's House (the Temple, where YHWH dwelt) and to "be consumed with Him". He sought understanding and counsel to see His Father's will and purpose completed on earth. I want all that, too!
Now, you know that I have been speaking about God's purpose for mankind, as revealed in Genesis, Chapter One: man was created in the Spiritual image of God, with the intent that he would increase, multiply, and "subdue" the earth. That word "subdue" is the Hebrew word kabash, and it means "to tread down; to conquer, to subjugate". In other words, we were not created equal to God, but were made to rule over what He created, and to administrate [be in authority] over this planet, which was designed to reflect Him, His Nature, His Character, and His Kingdom in Heaven.
So, when this little slip of paper appears, my spirit reminds me to quit asking questions and "listen for His voice"... just be quiet, and listen for what He wanted to reveal. That whisper in my spirit reminded me of a word that was spoken over me nearly two years ago ... that I have lots of questions and am asking questions of God all the time, but I'm not waiting to hear an answer before I'm asking the next question. Apparently, I still haven't learned how to stop and listen enough -- hence, the appearance of the slip of paper at this opportune time.
Today, I have spent hours just being present in my spirit and letting God bring to my mind what He wants to say. I have been asking why it is so difficult to explain the concept of His Kingdom on earth to my fellow Christians. I understand that we have been stuck on a message that is only part of His plan. But is there a simple way to explain the bigger picture and get our understanding back on track? It would make it so much easier to try to present the Kingdom if I could see [or hear] how the Father sees it. So, I have gone about my day, concentrating on being "tuned into" the Father's voice. And then, an hour or so ago, He presented His simple argument for the defense of the Kingdom gospel. Here it is:

We are spirit from Spirit; made in the Father's image and sent to earth [knit in our mother's womb] and born as flesh in the earth. That is our first birth. Due to the sin of pride, original man gives up his rulership of the earth to Satan. [Jesus even calls Satan "the ruler of this world" in John 12:31]. But when Jesus begins His ministry for the Father, His first words are, Repent [change your inner self; your old way of thinking], for the kingdom of Heaven is at hand [is now accessible]. Jesus is announcing that He has come to re-establish Heaven's "Kingdom way of life" on the earth [the Father's original plan]. So He begins preaching the "Good News of the Kingdom", because "that is why He was sent" (Luke 4:43).
But the religious leaders would not receive that message, hanging on to their religious traditions and teachings that had been corrupted since the captivity of God's people in Babylon. But then one night, a religious leader, a Pharisee, comes to Jesus and admits that he knows Jesus has come with God's teachings and demonstrating His power (John 3:2). But then Jesus gives Nicodemus more than he bargained for, saying, "Nicodemus, listen to this eternal truth: Before a person can perceive God’s kingdom realm, they must first experience a rebirth [be borne again from above; spiritually transformed, renewed, sanctified] (John 3:3)".
That, my friends, is called SALVATION. It is the first step to entering the Kingdom of God on earth. Until you can recognize your need for a Savior, surrender your sinful ways to Christ, and begin living according to Heaven's ways, you cannot be "born again" and enter the Kingdom. Salvation is an essential part of acquiring the Kingdom! But it was not Jesus's primary message!
Then we see Nicodemus incapable of understanding this principle, and taking everything at face value: "How can a gray-headed man be reborn? It’s impossible for a man to go back into the womb a second time and be reborn!" And here is Jesus's stunning answer: "I speak an eternal truth: Unless you are born of [Living] water and Spirit-wind [the breathe of the Holy Spirit], you will never enter God’s kingdom realm" (John 3:4-5). Unless you are Saved, the Kingdom Jesus brought will be inaccessible. Salvation is essential, but it is not the ultimate goal. Jesus came to bring us more! 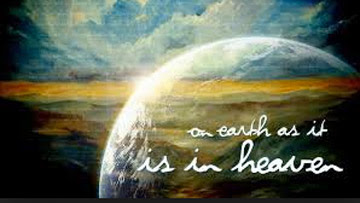 That is the only time that Jesus ever preaches about being born again -- about the necessity of Salvation in regards to its requirement for entering the Kingdom on earth! We are first born into this natural realm called the world, and when we receive our Salvation, we are born again into the spiritual realm, [which is actually where we came from]!  At our conversion, we have been given back our original assignment to rule the earth as created sons and daughters of God the Father and Jesus Christ, our King.
But SO MANY Christians stop at that first step, thinking they have completed their assignment. If that was true, why would Jesus say unless you are Saved, you will never enter the Kingdom? Can you see that entering the Kingdom is the primary goal, and Salvation gains you entrance into it? Salvation, as important as it is  -- and I am not diminishing our escape from eternal death -- is a prerequisite to His actual reason for coming [to make earth like Heaven - Thy Kingdom come, Thy will be done, on earth as it is in Heaven]!
That is what Jesus preached! He said, And this gospel of the kingdom will be proclaimed throughout the whole world as a testimony to all nations, and then the end will come. He didn't say, "Just get people saved, and then I will come".  Again ... He didn't say get everyone on earth Saved, and then I will come back. But that has been the Church's primary focus! No! He gives us how God's plan is laid out when He is talking to Nicodemus. Until you are Saved, you are unable to spiritually understand the concept of the Kingdom; and you cannot enter it. And until it is preached throughout the world, He is not coming back. He even tells Nicodemus, If you’re unable to understand and believe what I’ve told you about the natural realm, what will you do when I begin to unveil the heavenly realm?  No one has risen into the heavenly realm except the Son of Man who also exists in heaven.”
Jesus is sharing a mystery with Nicodemus that is lost on too many Christians. While he was on the earth ministering, Jesus was also in heaven in the spirit realm. Being in two places at the same time is also the privilege given to every believer. We are seated with Christ in the heavenly realm [where we can receive our instructions, just like He did while on earth]. At the same time we are entrusted to take what we've been taught and transform earth to become like Heaven; Salvation is the starting point; the beginning of our assignment process; our introduction to the Kingdom of Heaven, which we can have while still on earth.  Finally, both Salvation and the Kingdom are part of Jesus's "Good News". The gospel of the Kingdom is the Messianic promise of the Kingdom of God which has come to earth, with Jesus as King. For now it is a heavenly kingdom but will be a completed physical kingdom on earth when we do our part of sharing that good news, resulting in our King's return. The gospel of Salvation is the way to become citizens of the Kingdom. This is what it means to be “in Christ.”
So, if Jesus taught or preached about the Kingdom of God 120 times in the Four Gospels, but spoke of salvation or being born again only 11 times, how did the Gospel of Salvation come to overshadow the Gospel of the Kingdom in the Church? I'll give you what I'm discerning about how that came about in the next blog post. In the meantime, please take my advice: dedicate some quiet time for you and God to sit and have a quiet conversation. And let Him do most of the talking. Ask Him about the importance of the Kingdom; not only for His will and purpose, but in your life. I can't stress enough that it is important, indeed.

Daniel 7:27    And the kingdom and the dominion and the greatness of the kingdoms under the whole heaven shall be given to the people of the saints of the Most High; their kingdom shall be an everlasting kingdom, and all dominions shall serve and obey them.

Email ThisBlogThis!Share to TwitterShare to FacebookShare to Pinterest
Labels: Gospel of the Kingdom, The Kingdom of God