God And His Law 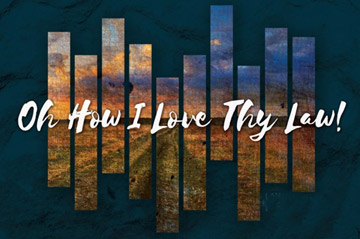 When I asked Jesus into my heart and proclaimed Him as my Savior over 30 years ago, I became a member of a Church in Austin, Texas that was known for breaking the bonds of strict religious doctrine. Like many churches of that era, the message heard each Sunday changed from "Law" to "Grace". In fact, the mantra became that the Law belonged in the Old Testament, and Jesus's resurrection meant we were now all under Grace, not the Law.
In the minds of many believers, this has led to the Law of God being positioned in a subordinate role to Grace. But that is a false assumption. The fact that we have a legal standing of righteousness before God bears witness that His Law is still in existence, and it is important to Him -- that standing before God that says we are in covenant with Him as citizens of the Kingdom of God on earth, and our belief in salvation from Jesus Christ [alone], our King.
Sometimes I think the modern Church has forgotten that God's Laws define righteousness and sin, and the last time I looked, both can still be a problem for man, and are therefore still pertinent in our lives. They are not burdensome and every one of them is for our benefit. The Apostle Paul, who is so often used to justify a "Grace Only" theology, tells us that "the law is holy, and the commandment is holy and righteous and good", and that "the law is spiritual" (Romans 7:12,14). Doesn't sound much like we should dismiss the Law, does it?
But there will be those who say the Law no longer has any significance for us, and that is what the writer of Hebrews is saying in 8:13, In speaking of a new covenant, He makes the first one obsolete. And what is becoming obsolete and growing old is ready to vanish away.  I think it is important that we read this verse within the context of what the writer is talking about. He is speaking about the renewal of the original covenant into a better model. He is not talking about abolishing the Law.