Who God Is In His Judgment, Holiness, and Love

His Judgment - For awhile now, I've been hearing a misguided cliché spoken by people in the Church. It goes something like this: "We don't need to worry about God's judgment against America. If God were really going to judge us, He would have to apologize to Jesus." What?!?
The skewed reasoning behind this ludicrous statement relies on a false understanding of the gospel -- that Jesus bore our sins on the Cross, and therefore our judgment is nailed there, too. God will not judge us because, after all [they say], doesn't the Bible tell us that there is now no condemnation for those who are in Christ Jesus? This misunderstanding is a prime example of one of the Body of Christ's most egregious shortcomings, which is not taking into account the whole counsel of God.
And on this matter of God's judgment, I hate to say it, but .... in the current Church culture there is almost an ignorance of what the Word reveals on the subject. The failure to study and understand God's judgment -- and dare I say it, His wrath -- has led to a lack of holy fear in a lot of Christians. Many think that we don't need to worry about God's judgment or wrath because that doesn't happen until the End Times. They think that until then, we are covered by the blood of Jesus, forgiven of our sins, and righteousness has been imputed to us by our faith. No need to worry, right?
Well, when you take a look at what is becoming the norm and acceptable in our nation -- in our culture and our laws, and yes, even in our churches -- I believe you will see we are being judged even now. How so? Consider Romans 1:18, which says For God in heaven unveils his holy anger breaking forth against every form of sin, both toward ungodliness that lives in hearts and evil actions. For the wickedness of humanity deliberately smothers the truth and keeps people from acknowledging the truth about God (TPT). 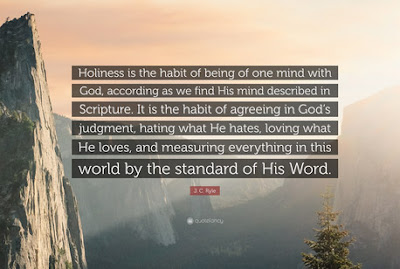 When I consider what has happened in this nation since I came of age in the early 70s, it is astounding. I have seen the acceptance of casual sex through an immoral sexual revolution; the institution of full-term abortion in the laws of our land; the acceptance and promotion of same-sex relations and marriages; gender manipulation and elimination; and much more. And it is not just unbelievers who have taken part in these actions, but those who profess to love God! But what does God's Word tell us in Romans 1:18? What God sees as the"wickedness of humanity" will result in his holy anger because people refuse to acknowledge the truth about God -- that He is a righteous God who cannot tolerate unrepentance and continued sin. That chapter in Romans goes on to say that because people exchange the truth about God for a lie, He gives them up to their sins. Isn't that what we're seeing today in our society? That is judgment in itself, and should give anyone pause.
But it is verse 32 that I see so clearly in our nation today -- from the home to the boardroom; from the halls of Congress to our Church buildings ... Although they are fully aware of God’s laws and proper order, and knowing that those who do all of these things deserve to die, yet they still go headlong into darkness, encouraging others to do the same and applauding them when they do!
His Holiness -  If you mention "holiness" in today's society, it's almost an irrelevant term -- looked upon as outdated and insignificant. But I believe that the moral confusion we see in our culture is a result of a lack of understanding about holiness. In regards to each of us, holiness is being dedicated and committed to living a pure life; consecrated to God in our word, thoughts, actions. In other words, we do not conform to the world's standards, but rather to God's.
As holiness relates to God, one of the best definitions I've ever heard is the following: "Holy refers to life burning with an intense purity that transforms everything it touches into itself". Only God is perfect in goodness and righteousness, therefore He is worthy to be exalted and worshiped. But where is the acknowledgment and reverence for His holy nature? To be holy means that all we are and all we have belongs to God, not ourselves, and is set apart for His purposes.
Yet, I sense a frightening silence about God's Holiness in the Church -- the meaning of it and our responsibility to it; the necessity of it in our decaying moral structure; and yes, even the endorsement of it from the pulpit. It's as if somehow, the Church is afraid to offend the world with an idea that we should be holy like our God. The lack [or ignorance] of holiness in the masses leads to a distorted and limited view of the true God. When we do not uphold God's standards of holiness, we are short-changing His expression of love. And that brings me to the final attribute...
The True Love of God - God's love is not a permissive love. He has set Divine standards for the purposes of our lives, and He does not capitulate based on man's fleshly desires. His is not a sentimental love based on our emotions, but rather a Holy love designed to bring us into righteous relationship with Him.
For example, we can consider homosexuality, and the ordaining of gay clergy in some Church denominations. This practice has been adopted, all in the name of love. Should we continue to love our homosexual friends and family members? Absolutely! But that does not mean that we change God's Word to match the way we feel.
No man was more loving than Jesus Christ. Yet His love for all men did not prevent Him from disapproving of lifestyles and motives. Sometimes His love even made people angry. But it was a love that could not deny His Father's Holiness, and it was His desire that this holy love transform people into the image of God.
In fact, Jesus mixed God's love with His truth and His holiness to give us a clear Biblical blueprint by which to live our lives. But we want to ignore certain verses, or even alter their meaning to make it more palatable to our lifestyles.  Some have even gone so far as to disregard and nullify any attempt to shine a light on God's judgment [or wrath], His holiness, or the truth that hell actually exists! The result is that God's love is watered down and corrupted to simply an emotional feeling.
I fear that the Body of Christ is not doing justice to the full nature of God. When we want to make Him in our image, we diminish the power of the Gospel to effect the world. He IS a God of Judgment, and yes, even wrath. At the end of this Age, we who have been faithful will not be subject to that wrath, but it doesn't mean that the world won't experience it. He IS a Holy God; one who is perfect and separate from man's corrupted state, with sacrosanct values that are not to be interfered with. And He IS a loving God who isn't afraid to use discipline when it is necessary to correct disobedience and establish His truth. It's time we, as the Church of Jesus Christ, take a good hard look in the mirror at how we are manifesting His glory. We are all praying for an awakening in the souls of men, but the stirring must start with us.

Proverbs 11:31    If the righteous are barely saved, what’s in store for all the wicked?