The Power Of The Spoken Word To Bring Inner Healing

I have to share the amazing works of my Lord Jesus! First of all, He never ceases to surprise me with how He makes His presence known in ways I'm not expecting. In addition, He will bring forth concepts from those encounters that I had never before considered. And He did all that this weekend.
Mark and I were blessed to be invited to speak before a small group of Evangelical Millennials who were interested in learning more about our Inner Healing and Deliverance Ministry.  All I knew was that they were involved in something similar to "Street Ministry" in which they canvassed their neighborhoods and apartment buildings, sharing the Gospel Message. I assumed they wanted to know how to incorporate Deliverance into that short amount of time they would have the opportunity to speak to people on the street. 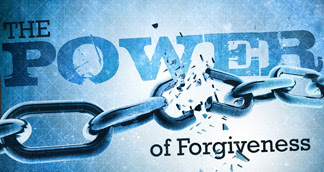 So, as in our more formal sessions of Deliverance, we always begin with the issue of Forgiveness. We explained to the group that unforgiveness is the single most powerful weapon the Enemy has to keep us in bondage. In fact, when people come to our Table of Healing, we often find they can't explain the feelings of depression or heaviness that keeps them from feeling the joy of the Lord. The first question we ask is, "Who are you angry at", followed by "What do you need to forgive them for"?
We then employ an exercise that has profound effects on breaking those chains of bondage that keep people tied up in anger and unforgiveness. We have them recite [out loud] the following: Father God, I forgive ________ for _________.  It made me feel _________. Father, I release him/her/them to You, covered by the blood of the Lamb. It may sound too simple but we explain that the act of saying this out loud and releasing the person(s) who have wounded their soul and/or spirit has a profound effect in the spiritual realms. Proverbs 18:21 tells us that words have the power to give death or life, and the person who speaks will bear the fruit of those words, whether good or bad. When we are able to forgive someone who has deeply wounded us, and state the act and how it affected us, the power of that wound is mitigated because it is no longer held in secret for the Enemy to use against us. Both the Beloved and the Enemy sees the persecutor released to God [covered by the blood of Jesus]. Then the wound can no longer fester in darkness, but has been exposed to the Light of Jesus, which heals all things.
So I introduced that simple exercise as a "quick and easy" way to bring healing to someone they were evangelizing to, at the same time stressing that it is extremely effective and profitable for the Beloved. I soon realized that this group wanted and needed more information on the whole process of Deliverance and its Biblical foundation. So Mark and I expanded our testimony and training to the group. What we didn't know was that one of the young people had quietly got up and left the room. The spiritual leader of the group got up to minister to him, and actually used the Forgiveness exercise. When they rejoined the group, they gave their own testimony of what happened... At first, the young person didn't want to say the words out loud. The wound was so deep that they just wanted to write the name of the person and the hurtful acts -- not speak them out loud. But the leader encouraged the spoken word and it was truly liberating! He testified [with a face that beamed pure joy] that Jesus had truly set him free!
And that's really the point I want to make with this blog post. Being able to confess the name of someone who has hurt you, what happened to you, and how it made you feel takes away the power of the Enemy to continue to lie to you about who you are. Releasing all that pain to the Lord cuts those bonds to sins of anger and unforgiveness, and Jesus takes it all away and covers it with His blood.
As I meditated upon the grace of Jesus to allow this group to witness the power of forgiveness in their midst, the Lord broadened my understanding of why the spoken words of Forgiveness are so important. He showed me that when we are able to speak Forgiveness out loud, it is recorded in our Book of Life in Heaven. So when the Accuser comes before the Court of Heaven to accuse us of unrighteousness and unforgiveness (which we walked in [in silence] all the years we harbored it), there is evidence before the Lord that our Accuser is giving false witness. 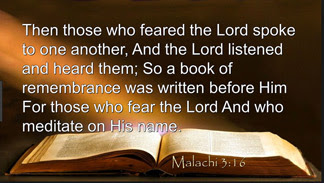 Now, I may not be able to show you Chapter and Verse where the Bible states this concept in precise terms, but I can tell you that I see enough of the shadow of this theory in Scripture to call it real. In Daniel 7:9-10, the prophet is given a vision and he tells us that he saw thrones put in place in Heaven, and the Ancient One sat down to judge. Millions of angels ministered to Him, and millions stood to attend to Him. Then the court began its session, and the books were opened. There is little in Scripture to tell us exactly what was written in those books, but perhaps we can see a parallel "on earth as it is in heaven". Consider the books of I and II Kings, and I and II Chronicles. There we find the acts and deeds recorded [both good and bad] of the Kings of Judah and Israel. In fact, 1 Kings 11:41 says, "The rest of the events in Solomon’s reign, including all his deeds and his wisdom, are recorded in The Book of the Acts of Solomon".
But there is a particular verse in Malachi that I discern gives credence to what the Lord recently showed me. Verse 3:16 reads, "Then those who feared the Lord spoke with one another. The Lord paid attention and heard them, and a book of remembrance was written before Him of those who feared the Lord and esteemed His name".  When we participate with Jesus and the Holy Spirit in a Deliverance/Inner Healing session, we are most certainly people who fear the Lord and we are speaking with one another, confessing forgiveness and reconciliation, and being healed in the process. And I know that the Lord pays attention and hears us, because I have witnessed the consequences of those actions, and it is called spiritual freedom! And I do believe that our faith and reverence for the power of Jesus "to forgive our trespasses and to forgive those who trespass against us" is recorded in Heaven as witness to our esteem for His name, and as a challenge to Satan's charges against us.
Our obedience to forgive, and then announce it so that the spirit realm hears, causes our testimony to be recorded and preserved in the books of heaven, whether it be the Book of Remembrance in Malachi or the Lamb's Book of Life in Revelation. In the end, I cannot really explain the spiritual mechanics of why it works ... I just know it does!

2 Corinthians 4:13   Yet we have the same spirit of faith as he had, who wrote in Scripture, “I believed, therefore I spoke.” We also believe, therefore we also speak.."

Email ThisBlogThis!Share to TwitterShare to FacebookShare to Pinterest
Labels: Deliverance and Healing, Forgiveness