Beware Of A Spiritual "Normalcy Bias"

Way back in 2012, I wrote an article titled Our Nation's Achilles Heel, and at the time I was focused on how I viewed this world and what I could see going on "behind the curtain", so to speak. At the time, I was concerned about a particular mindset of Americans called "normalcy bias", and I identified it as this: a tendency (or preference) to view the world around you in its usual, customary state. And like I said, in 2012 I was focused on the geo-political state of the world, so someone's normalcy bias might manifest in a mindset that said, "America will always be a Super Power.  No one is going to take us down"; "I still have a job. Everything's going to be alright"; "I don't need to prepare.  If I just believe in God, He will take care of me." "Nothing's really changed in my life; I still do all the things I've always done. What's the big deal?"
Perhaps God revealed that carnal aspect of man's make-up so that as He grew me in the path He had designed for me, I would be able to see the correlation of this concept to the spiritual world. By that, I mean that I see a tendency among Christians to retain a "status quo" when it comes to how they view the spiritual side of their lives. Just like the carnal world, when you decide to step outside of your spiritual comfort zone, it's less comfortable, for sure. But a spiritual normalcy bias also means you choose to look upon the spiritual realm(s) as you always have; you convince yourself that nothing's changed in how the Enemy operates, so you see what you want to see -- or ignore the things that don't coincide with your theology or doctrine.

Let's take a look at these examples: from the time you've been a child, you were taught (and believe) that God is in control of everything ... All you have to do is pray and hope He will answer your prayers ... Suffering is often necessary for a Believer to come closer to God ... Once we're saved, we live out our lives as "good Christians" until the day we die, and then we go to heaven. Do any of these ideas sound familiar to you? I am not condemning anyone who believes these concepts. But I will say that I pray they receive greater revelation from God on these matters. Here's why...
If the aforementioned concepts define one's belief system, then I wonder how one reconciles the Scripture that tells us to put on the armor of God to stand against the schemes of the devil; or to be sober-minded and watchful because the devil is looking for someone to devour. And then there is the Word that says whatever you bind on earth will be bound in Heaven, and whatever is loosed on earth will be loosed in Heaven. Have you ever asked yourself, "What would need to be bound? Or what would I loose?" I'm pretty sure there are Christians who think that Jesus accomplished the work [while here on earth] to defeat the devil, so what does that have to do with us? After all, they might say, weren't His last words "It is finished"?
But if I am looking at this spiritual normalcy bias objectively, I would have to say that at the center of this belief system is Christian eschatology, which is concerned with death and the afterlife, Heaven and Hell, the Second Coming of Jesus, the resurrection of the dead, the Rapture, the Tribulation, Millennialism, the end of the world, the Last Judgment, and the New Heaven and New Earth in the world to come. --- in other words what happens to the Believer in the future.
Here's the thing.... since most Christians see all this as in the future, they are hard-pressed to tell you what they know about any of those Biblical tenets. So they continue to walk in their normalcy bias -- none of this effects me, and I know I'm saved and going to Heaven. I just have to be good until I die. And if you happen to believe in the Pre-Tribulation Rapture, then you're even more convinced that none of these Biblical tenets apply to you.
But I believe there's a danger in that kind of mindset. Just as those who thought life during Hurricane Florence would be normal, I fear there are Christians who view their spiritual surroundings from a "nothing's going to change" bias. In other words, the study of eschatology has moved the Church's focus to our final destiny, instead of educating and preparing us for what's happening in the spiritual realm(s) in the here and now. 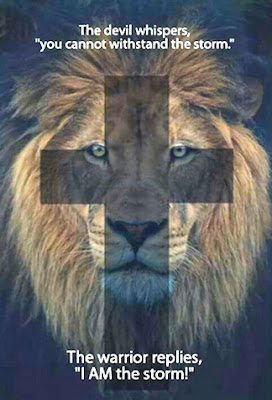 We must begin to sharpen our spiritual senses and see beyond the veil of this carnal world. Yes, we are co-heirs with Christ in the world to come, but we still have a lot of living to do in this world! And while we're waiting for Jesus to come back so we can go to Heaven, there is a war being waged against our culture, our bodies, our minds, and our spirits. Not only have we become lethargic about protecting our Godly institution of marriage, our gender identity, and family values -- but most of the Church is unfamiliar with just what "As it was in the days of Noah" implies for this generation or the next.
Our normalcy bias causes us to not even consider that Fallen Angels could actually affect our current existence; whether it be through technology, DNA manipulation [as it was in the days of Noah], or setting up false religious, political and economic systems that will ultimately lead to the "Beast System" at the end of this Age. Our normalcy bias would tell us that we will escape any such destruction or deceit. But will we? What does the Bible say?
I am not advocating that we see the devil or demons around every corner. But it would be wise to to let go of our normalcy bias and see with spiritual eyes.  The battle for mankind doesn't just come at Armageddon. There is a battle going on right now! We might not see it with carnal eyes, but that doesn't mean it isn't being waged in the spirit. Just remember this ... the people in Noah's time were living their lives as if nothing would change, oblivious to the coming Flood. We have been warned by Jesus in the Bible. Can we afford to ignore His warning?
And let us not forget that the Bible tells us the Restrainer is keeping the lawlessness [that will mark the End Times] at bay. What does that look like? And are you spiritually prepared to endure it, should you be on the earth at that time? It is my prayer that all Christians walk in Spirit and Truth; that they rise above cultural religion and conformist attitudes about the spiritual reality in which we live. Just as a normalcy bias will render you a victim in this carnal world, so will it cause greater suffering in the spiritual. Let us not succumb to a spiritual life that is routine or "business as usual". Let us walk in spiritual awareness and insight, just as our Lord and Savior. Then we will walk as victors and not as victims.

Luke 21:34    Be careful that you never allow your hearts to grow cold. Remain passionate and free from anxiety and the worries of this life. Then you will not be caught off guard by what happens. Don’t let me come and find you drunk or careless in living like everyone else.
Posted by Pam Kohler at 6:30 AM