Preach The Word Without Compromise

Exactly what does it mean to "preach the Word without compromise"? I have often heard that phrase, but could not find that exact wording in Scripture. But what I did find were several verses of counsel to consider when preaching the Word. [And for the sake of this post, I am referring to all Believers as "preachers" of the Word when we share it with the lost].
2 Timothy 2:15 says, Do your best to present yourself to God as one approved, a worker who has no need to be ashamed, rightly handling the Word of Truth. It is obvious that there is a "right way" to interpret and preach the Bible, is there not? And are we any less guilty of Paul's warning to the Galatians to not turn to a different gospel, nor to distort it?
As we look upon our religious culture in the 21st Century, it is becoming quite apparent that there are diverse "messages" out there, all proclaiming to represent the rightly divided Word of God. But they can't all be correct, since there are contrasting views within "the Church" on God's acceptance of homosexuality; on the relevance of spiritual warfare; on the definition of the Great Commission; and even on His acceptance of worshiping other gods.
So, do all these varying religious opinions meet the approval of God by the standards He sets in His Word? Which of these messages come from human wisdom, and which are revealed through the Spirit of Truth in the Bible? Which messages rest in the wisdom of men, and which in the power of God? 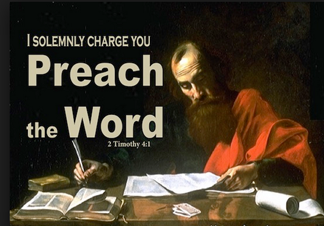 These may seem like elementary questions, but I think we need to be very aware of the Enemy's tactics in these Last Days. I am seeing everything from a powerless Gospel being preached, to a dangerous message of unity that is not Biblical. The Word is the power of God to save us from eternal hell. But that Word must not be weakened, watered down, or compromised. The very definition of the word compromise is this: a middle state between conflicting opinions or actions reached by mutual concession or modification; an agreement or a settlement of a dispute that is reached by each side making concessions; the acceptance of standards that are lower than is desirable. Do any of those definitions sound like they define the Nature of our God? Does He make concessions or allowances for His laws and commandments -- or ever lower His standards?
But sadly, compromise has been welcomed into the Church, and the Word of God is sacrificed on the Altar of Unity. The Bible clearly states that there are to be no other gods before Jehovah, the Most High God. Yet, in 2016, the Vatican produced a video in which the Pope endorses a unified Religion of various gods. The video opens with the statement, "Most of the planet's inhabitants declare themselves believers [showing religious leaders from Buddhism, Judaism, Islam, and Christianity]. This should lead to dialogue among religions. We should not stop praying for it and collaborating with those who think differently". Sounds like COMPROMISE to me! Then each religious leader makes a statement: "I have confidence in the Buddha. I believe in God. I believe in Jesus Christ. I believe in God, Allah." Then the Pope says, "Many feel differently, think differently; seeking God or meeting God in different ways. In this crowd, in this range of religions, there is only one certainty we have for all: we are all children of God". WRONG!
John 1:12 clearly tells us, "But those who embraced Him and took hold of His name were given authority to become the children of God"! That means that only those who believe in all that Jesus represents and put into practice what He taught [in the power of His Name] are the only ones who have the right to be called children of God. Just because one proclaims that he or she "believes in love", as each of the religious leaders says on film, does not qualify one to be a child of the Most High God.
It may sound like "love your neighbor as yourself" when the Pope asks you to share his prayer request that "sincere dialogue between men and women of different faiths may produce the fruits of peace and justice",  but it does not mean that it is pleasing or acceptable to YHWH. We see the lines being blurred between unity and diversity, to where [as stated in another video] "It is better to be less perfect in unity, than it is to be the most perfect in diversity". In other words, we've come to the point that people are willing to have less of God's Truth in exchange for more harmony with the religions of lesser gods. For it cannot be said any clearer than this: For there is one God, and there is one mediator between God and men, the man Christ Jesus. That verse cannot be conflated; it cannot be mixed and blended with other belief systems and still be representative of the uncompromised Word of God.
Yet, increasingly, we see evangelical Christian leaders joining hands with the Pope and other religious leaders in their call for religious unity. And the various denominations have undermined the Word of God when they embrace cultural lifestyles that do not conform to the commandments of the God they pray to. There is no "happy medium" where God is willing to adapt His Glory, Majesty, or Sovereignty to fit our ideas of justice and mercy. It is by His Grace that we have been saved from the damnation we deserve for man's disobedience to our Creator. How dare any man attempt to equate another god to the Most High God, or tarnish His Name that is above all names! It is time that we, the true Believers in the One True God, declare our unyielding and unshakeable faith in the accurate Word of God. It's time to step into our authority to preach the Word as laid out in 2 Timothy 4:2, "proclaim the Word of God and stand upon it no matter what! Rise to the occasion and preach when it is convenient and when it is not. Preach in the full expression of the Holy Spirit —with wisdom and patience as you instruct and teach the people". No more compromise!

John 5:44    How can you believe, when you receive glory from one another and do not seek the glory that comes from the only God?