Forgive me, but this post is going to be quite personal, and in a way is a conversation I am having in my head with God.  And I want to share this experience with you because any one of you might be going through a similar scenario with a friend or family member.  And if you aren't at the moment, I want you to remember this conversation, so you can encourage others in the future. 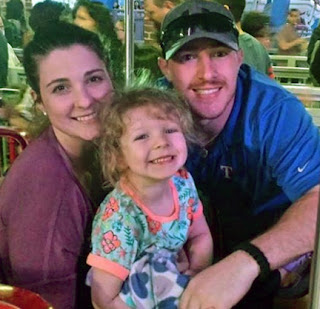 While on vacation last week, I received a text message regarding a young woman from our community who had been in a terrible accident.  Her name is Molly and she is a beautiful young wife and mother of a three-year-old daughter.  She and her husband were returning home from their own vacation, when Molly grew tired and climbed in the back seat to rest.  Tragically, her husband fell asleep at the wheel and hit a tree.  Both he and their daughter were buckled in; Molly was not.  She suffered a compound fracture of her right leg, and during the surgery that followed, Molly developed an embolism which traveled to her brain, and she is now in a coma.
Mark and I received the text asking us to join with all those back home in prayer for Molly and her family.  I knew that there would be those  faithful Believers who were going to travel to the hospital to lay hands on her -- it was two hours from our little community -- and we made the decision that as we returned from our own vacation and passed near the hospital, that we would go by the ICU unit and lay hands on her, too.
There have been small signs of hope; she opened her eyes a little bit after we approached the throne room of Heaven in boldness and confidence that we could petition God on her behalf.  There was also some slight movement which offered hope that our prayers were heard.  The opinions of the doctors and nurses have varied ... they were discouraged two days ago when we visited the hospital, and just a couple of hours ago [as I write this} the report was that she had developed shingles and no one would be allowed to visit her but family.  There was slight improvement in the swelling of her brain and the fluid in her lungs was decreasing.  I am believing that the power that was released into Molly's body by people praying and following Jesus's model of laying on hands is taking effect!
And the fact that no one would be allowed to see her [because of the shingles] might preclude that we wouldn't be allowed to pray over her anytime soon, but that didn't keep me and my husband and our neighbor from going in the spirit and laying hands on her. And I will tell you that I felt [even at this 2-hour distance from her] something happening... my spirit was in that hospital room with Molly and I knew that God was delivering His healing power.
The prayers will not stop, neither corporately nor individually. Mark and I approached God this morning with a heartfelt request and this is how that conversation went ... "Father, Jesus says in John, Chapter 14:  I assure you and most solemnly say to you, anyone who believes in Me [as Savior] will also do the things that I do; and he will do even greater things than these [in extent and outreach], because I am going to the Father.  And I will do whatever you ask in My name [as My representative], this I will do, so that the Father may be glorified and celebrated in the Son. If you ask Me anything in My name [as My representative], I will do it.
So, Father, we have been obedient. We have done what Jesus did, and what You ask of us [in extent and outreach] -- We have acted as Jesus's Representatives and we have laid hands on Molly to heal her.  So, now, Father, we need You to do what Your Word says -- to do what we have asked in Jesus's Name, and heal Molly -- completely and wholly.  She is a daughter of Your Kingdom and You tell us that if we believe in Your Son, our spirits are seated in the heavenly realm with Him.  So, as Molly is in Heaven, we ask that You make her here on earth --- healthy and healed.
And, Father, we aren't going to quit asking until You deliver this promise in Your Word.  Because Jesus also tells us in Chapter 16 of John that whatever you ask the Father in My name [as My representative], He will give you. Until now you have not asked [the Father] for anything in My name; but now ask and keep on asking and you will receive, so that your joy may be full and complete.
Father, I am telling you now, that our joy will not be full and complete until Molly returns home, fully restored.  Molly needs You to fulfill this promise; her husband and daughter need it, and so do her parents.  But, Father, the small group of faithful servants who are stepping out in faith to be obedient to Jesus's Great Commission of healing the sick needs it, too.  Father, we need this miracle -- not as a test of Your Power -- but as validation to other doubting Christians that when we submit ourselves to Your Word, our obedience will bear fruit.  Father, we want to see You glorified and Your Son celebrated. We trust You to be faithful to our service to the Kingdom".

As I have been sharing [with you] our conversation with God, I have received an update on Molly.  Another doctor was called in for a second opinion, and his perspective is that Molly has made "substantial strides".  Furthermore, he stated to her parents and husband [point blank] that Molly was "going to make it".  He said everyone should keep praying that she doesn't develop any blood clots, and he thought her MRI showed minimal brain damage.
Now, I will let you decide if you think this latest turn of events has anything to do with the fervent prayers or laying on of hands.  And I know Molly is far from out of the woods.  She is still in a coma and has a long way to go.  But I believe in God's promises, and those statements that Jesus made in John 14 and 16 are hard to deny.  I fully expect to report back that Molly will soon be going home to finish out the number of days God has appointed for her.  Until then .... I go on praying and believing.

Email ThisBlogThis!Share to TwitterShare to FacebookShare to Pinterest
Labels: Deliverance and Healing, Hope