This weekend I went to see the movie "The Case for Christ", a biographical film depicting the life of investigative journalist Lee Strobel, who was an atheist.  In setting out to disprove his wife's newfound faith in Jesus, Strobel ends up being unable to do so, and must admit that faith in Jesus rests on His resurrection, which is verified by historical and medical circumstances. Unable to debunk  what he thought was myth and legend, and backed by centuries of facts confirmed by different sources [which are the hallmark of his trade as a journalist], Lee surrenders to the knowledge that faith in Jesus's resurrection is a truth that cannot be denied.  And the atheist becomes a Christian.
But this post is not about reviewing the movie, but is instead, about a confirming truth from the Bible that the movie brought to light.  In one of the opening scenes, Lee tells his young daughter, that as an atheist, he believes in what he can see.... intimating that Christians believe in fantasies and fairy tales; that their faith is not supported by anything real. But, sadly, I'm afraid that too many Christians share in that mistaken concept, and are missing the fullness of their faith by believing in only what they can see. 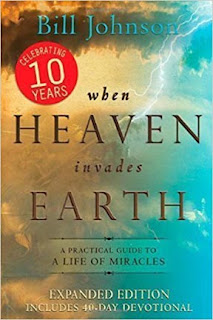 Before I go on with my theory, I want to give credit to Bill Johnson, Senior Pastor of Bethel Church in Redding, California. Yes, I am talking about that Bethel Church; the Spirit-led church known for miraculous healings and Kingdom work. In his excellent book, When Heaven Invades Earth, I have finally found church leadership that is speaking what the Holy Spirit has been downloading into me and my husband for the last two years.  And it perfectly relates to both what Lee Strobel declared and where many Christians find themselves.  Let me elaborate....
Like Christianity, Atheism is a religion in itself.  "Religion" can be defined as "an interest, a belief, or an activity that is very important to a person or group".  A Christian believes in Jesus as their Savior.  An atheist believes in the absence of the existence of a Supreme God or Deity; and may place his belief system in a variety of sources, such as Human Reason, Science, Logic, etc.  Like Lee Strobel said, in something that can be seen or rationally proven.
But I want to present to you a radical idea that Pastor Johnson presented in his book, and to which I wonder if Christians have given serious thought.  Johnson makes the simple, yet profound statement that Faith has its anchor in the unseen realm.  But how many Christians base their Faith on their natural sight; what they can see in this world?  And how many fail to consider the supernatural realm and how Jesus and the Apostles instructed us to look for the Kingdom of God there?  That's what it means to look with spiritual eyes!
Let me give you a few different Scriptures that will open up a little different concept of what Faith is.  In John, Chapter 3, Nicodemus comes to Jesus, telling Him, "We know that You have come from God as a teacher; for no one can do these signs that You do unless God is with him".  And what is Jesus's answer? “Truly, truly, I say to you, unless one is born again he cannot see the kingdom of God.” As Christians, we understand that to "be born again" is to have faith in Jesus as the Son of God.  But look at what Jesus is saying ... to have Faith is to SEE the Kingdom of God.  As Bill Johnson states in his book, FAITH SEES. With spiritual eyes, we can see into the spiritual realm, where the Kingdom of God comes into focus.  But it is in the unseen realm, not what we see here in this physical world.
The Apostle Paul reinforces this truth when he says, "Set your mind on things above, not on things on the earth" (Colossians 3:2), and "For the things which are seen are temporary, but the things which are not seen are eternal" (2 Corinthians 4:18).  Can you see how closely we Christians can fall into the same trap that Lee Strobel did; thinking that Truth can only be found in what our human eyes can see or discern?  If, as a Christian, you put that restriction on your faith, don't you run the risk of missing all of our Father's resources and benefits?  Didn't Jesus say He only did what He saw His Father do?  Can you accept the possibility that the measure of our Faith is rooted in our ability to see into that supernatural realm as Jesus did?  And that our belief system to actually put our Faith into action must be able to see beyond this world to the very throne room of God and His Presence?
When you think about it, Belief/Faith is anchored to the invisible and the revealed will of God... meaning we have to seek to see it.  On the other hand, and as Bill Johnson expresses so well, "Unbelief is anchored in what is visible or reasonable apart from God. It honors the natural realm as superior to the invisible [or supernatural realm]".  That's a pretty radical thought for Christians and paints a picture that is hard for us to swallow.  It is not to say that we don't see God in this natural realm. He is recognized in all His Creation, whether it be rivers, trees, the ocean, babies, angels, or heaven. We are able to see the witness of Him everywhere... for those with eyes to see and ears to hear.  But how many of us have difficulty in putting our faith in something we can't actually see in front of our faces?  And if this is so, how are we any different than Lee Strobel was when he was an atheist?  Doesn't the writer of Hebrews tell us that faith is confidence in what we hope for and assurance about what we do not see?
Taking it a step further, Unbelief is actually faith in something other than God.  So, I must ask --- who is your faith in?  Your Doctor? Your Pastor? Your Spouse? If it is in anyone or anything other than God, He is jealous over what occupies your heart.  And I know how difficult it is to admit that my faith is not all I want it to be.  But it is important that each of us recognize how easily our faith can be compromised. 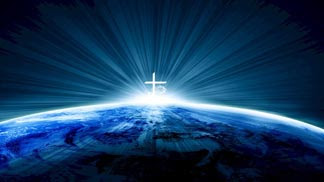 Satan has no power except when we come into agreement with him.  So whenever we let fear, or bitterness, or envy, or pride, into our hearts, a process of decay begins and there is room for the devil to come in and begin influencing us.  So our faith must become active and aggressive!  We must "see" that battle over our heart from a spiritual and Kingdom perspective, and force the reality of God's supernatural realm into a collision with our natural one.
We must come to realize that we have all the power of heaven behind us!  When our Faith can see the availability of the power of God as Jesus did, and bring it into our actual circumstances here on earth, we are invincible! That is exactly what Jesus did, and He gave us the Authority to do that same thing in Luke 10:19! It is then that the meaning of our Lord's Prayer comes into real focus ... Our Father, Who art in Heaven, Hallowed be Thy Name.  Thy Kingdom come, Thy Will be done, on earth as it is in Heaven.  This is not meant to be a mechanical prayer.  It is the reality of our Faith seeing into the spiritual realm and calling down Heaven [and the Kingdom of God] into our earthly existence.  It is as available to us as it was to Jesus! It's time we Christians begin seeing the invisible!

Matthew 5:8    Blessed are the pure in heart, for they shall see God.