Today I'm going to be very bold; actually blunt and honest more accurately describes my attitude.  And I'm going to start by pointing the finger at myself.  I have been writing this blog for nearly six years, all with the purpose of directing people towards God.  The first few years I was still focused on this world, combining a message of how to survive the tactics of men and the schemes of the Prince of this world to destroy us.  The last couple of years, I have clearly heard God's instructions to focus on Him and His will to see His Kingdom be realized on earth as it is in Heaven.
I have listened to the Holy Spirit and spoken to you about our Power and Authority; and shouted that we serve a Supernatural God. I have desperately wanted both fellow Believers and the Unsaved to grasp the magnitude of the God we serve and what He expects from us.  And, yes, I know that I have been moderately successful in getting that message across -- and maybe there are some people who have had those "Aha!" moments, or even began examining their theology and Biblical worldview.  But, I know that I've not done enough!!!

It's not enough to provide you with food for thought, if it doesn't result in a manifestation of God's Power here on earth.  Just as it's not enough for my husband, Mark, to do in-depth Bible studies whereby he teaches people in Colorado and Ohio about what Jesus meant when He spoke of the Kingdom of God.  And it's not enough for teachers and preachers in the Church buildings to "make a difference" in their classes or sanctuaries for one hour on Sunday mornings.  Yes, in all these instances people's minds are being expanded about what the Bible tells us about our God; they are receiving new concepts of the Bigness of God and new ideas about who He is.  But is that what Jesus demanded His disciples to do after He was gone?  Is it what He demands of us?
In Matthew 28, we receive our Commission from the Lord:  Go therefore and make disciples of all the nations, baptizing them in the name of the Father and the Son and the Holy Spirit, teaching them to observe [do] all that I commanded you.  So, now comes a very important question that I had to ask myself ... Where is the fruit from my labor? Are the people who I might have influenced through this blog doing the things that Jesus did and taught His disciples to do?  Are the people who my husband is leading in Bible study, or the students in that Sunday School class, Small Group, or members of the congregation sitting in the pews going out and converting people? Are they baptizing people in Jesus's Name? Are they laying hands on the sick, or casting out demons, or raising the dead, or discipling others in this Kingdom work?  If the answer is "No", then are we doing what Jesus commissioned us to do? Even our "home church" group is not measuring up to Jesus's instruction.
I will concede that there is a real need to be educating and teaching people in the Truths of the Bible, and the Gospel of the Kingdom. "Teaching" is specifically mentioned in Ephesians 4:11 as a gift from Jesus to build up the Body of Christ, and to bring Believers to maturity in their knowledge of the Son of God.  But we seem to have skipped over one very important reason that the gift of teaching was given -- to equip the saints for the ministry; a ministry that is exemplified by the fullness of Christ; that is, the full measure of all His powers. Teaching is supposed to result in Believers doing the things Jesus did, not just knowing about them! To that end, teaching is not enough!
I will tell you that God is making that point very clear to me --- head knowledge is simply not enough! I agree with American Evangelist, D L Moody, who said, "The Bible was not given to increase our knowledge, but to change our lives". If we are going to make an impact [and change] our cities, our neighborhoods, our communities -- why stop there? -- change the world, then we need to be doing more than educating people.  We need to be exhibiting the Power of God.  That's what Jesus did.  He brought Heaven to earth with signs and wonders, and He said that signs [and wonders] would accompany those who believed His message about the Kingdom of God.  And those signs would include healing, casting out demons, and raising the dead.  If we, in the Body of Christ, are truly making an impact in our labor for the Lord, then we should be seeing this evidence among those we are influencing.  So, why aren't we seeing it happen?
Timothy says in these last days we will have the appearance of godliness, but will deny its power. That's what I'm seeing.  The Body of Christ has either been convinced that signs and wonders stopped with the Apostles [which makes this belief akin to cessationism], or they fear signs and wonders because of the possibility of being deceived.  So, in their fearfulness, they deny the power of miracles, healing, and casting out demons, and replace them with religious traditions, church activities, and even Bible study. They become satisfied with knowledge alone, instead of a genuine encounter with the Power of God Almighty. 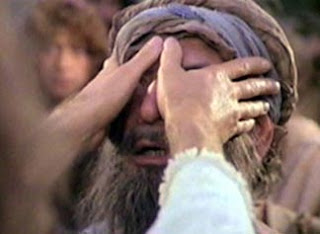 We are all created for greater exploits than expanding our minds and being able to explain our Bible.  After all, I think we would all agree that there are very real powers of darkness in this world who aren't holding back from the authority they've been given to exhibit their influence.  I have seen God's Power first-hand in the Deliverance Ministry that the Lord has brought me and my husband.  But think about this --- if we would seek an anointing of the Power and Authority that the Father gave Jesus, and which He then gave the Apostles and all who would believe, we could actually encounter the presence of God [just as they did] and defeat the ruling influence of Satan and hell.
I believe that my husband and I have witnessed the Power of God on only a small scale. Yes, we have seen people's lives changed as they encounter Jesus in a Deliverance session and allow Him to heal their spiritual and inner wounds. And we have partnered with Jesus to cast out demons from tormented souls.  We have witnessed to people and seen real conversions, and baptized new believers in His Name.  But it's not enough!  Our discipleship needs to result in these Believers then going out and exercising God's Power and doing all that Jesus commanded.
We need to end the powerlessness of the Body of Christ and make God's signs and wonders the focus and ambition of our lives.  Head knowledge only takes us so far.  When we can effect real change in a person's life by showing them God's love for them and the salvation message; by baptizing them; by healing their infirmity, or casting out a demon -- and yes, even raising someone from the dead -- then we can reflect the true image of Christ to the world, and God's will is truly being done.  We have long been told that we represent Christ; but what if we did as Pastor Bill Johnson suggests, and actually re-present Him? What if we returned to a gospel of God's Power, as well as one of His Love?
I no longer want to simply know that I have the Power and Authority from Jesus.  I want to exhibit it in my life every moment of every day.  I want the fullness of what it means to be a child of God.  I want the full manifestation of the Holy Spirit so that I can truly co-labor with Christ. I want God to be glorified through His power that is evident in me.  I want His power to be released in the works of my life so that repentance, change, and the desire to do the works of Jesus come into peoples' lives through real encounters with God.  As Jesus was, so I want to be!

Matthew 9:8     But when the multitudes saw it, they marvelled, and glorified God, which had given such power unto men.