Come, And Receive "The Children's Bread"!

It is quite encouraging that there are segments of the Body of Christ who are accepting the Word of God regarding Healing and Deliverance.  I want to make it clear that I acknowledge the difference in these two terms; recognizing healing as it pertains to physical sickness and disease, while deliverance relates to spiritual healing [including the casting out of demons]. And as I have explained in past blog posts, our English translation Bibles use different words that all have the connotation of healing; some of these words are salvation, delivered, forgiveness of sin, and of course, healed. Additionally it is interesting to note that the original Greek language of the Bible also used multiple words for the concept of physical or spiritual restoration.
As an example, here are some of those words --- Iaomai: heal, generally of the physical, sometimes of spiritual disease (Matthew 8:8,13 and 26 times in the Bible). Therapeuó:  properly heal, reversing a physical condition to restore a person having an illness (disease, infirmity); to relieve of disease; heal, cure, restore in health (Mark 6:6, Matthew 17:18 and used 43 times in the Bible). Soteria:  rescue or safety (physically or morally): — deliver, health, salvation, save, saving. God's rescue which delivers believers out of destruction and into His safety.  (John 4:22-23 and used 44 times in Scripture). Aphesis: deliverance, pardon, complete forgiveness; to be released from bondage or imprisonment; forgiveness or pardon of sins (Mark 1:4). Sózó: To Save, Heal, Preserve, Rescue; Deliver – the compilation of all facets of healing; JESUS’S FULL BLESSING (Luke 17:19).
Whether physical or spiritual, or a combination of both, there is plenty of evidence in the Bible that it was God's will that Jesus provide healing to all who desired it. And that is why the passage about the Canaanite woman in Matthew 15 is so profound.  Here is a woman who is outside the Covenant of God, and whose people are referred to as "dogs" by the Jews. Yet she is so desperate for the release of her daughter from demon possession, that she is willing to go against all the social conventions to approach this Man from Galilee that she has heard so much about.
Her religious leaders and the pagan doctors have not been able to relieve her daughter's suffering, and her only hope is Jesus. So believing He can heal her child, she dares to confront Him as the crowds swirl around Him. But Jesus's response is stunning! He's always been compassionate before, but this time He tells her that His healing is only for the lost sheep of Israel.  But He is her only hope, and she believes in His power and authority to deliver her daughter from the clutches of the demon, and she falls down, worshipping Him. But Jesus persists, saying, It is not proper to take the children’s bread and throw it to the dogs.
Yet this woman, even in recognition of her unrighteousness, is not willing to let go of what she knows is the truth ... Jesus has the power to heal! So, in meek and humble response, she says,  “Yes, Lord; for even the dogs feed on the crumbs which fall from their masters’ table.” Jesus is immediately moved by her faith and belief in Him, and the Bible says, And her daughter was healed from that hour. 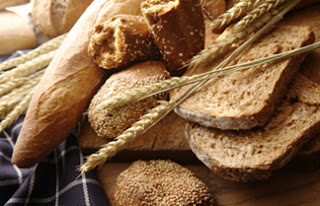 So, the first point I want to make is that this passage clearly states that deliverance from demons is part of Jesus's ministry of healing. As the Church, it is important that we not reduce his healing miracles to just those of a physical nature.  Secondly, we should take a closer look at what is being conveyed by the term "the children's bread". What do you think Jesus meant by it?  Specifically, in this case, it refers to deliverance from demonic possession.  But I am not willing to limit it to just this one aspect of healing.
It is easy to understand that "bread" is sustenance and nourishment.  Jesus is our "Bread of Life"; our source of strength; the One who enables us to endure this life; the One who feeds our souls.  But we should also recognize the implication that it is the children's bread that Jesus is protective of.  Who are "these children"? It is imperative that we understand that Jesus is referring to the children of God, and that the bread is the healing that is their right; that is to be expected; that is the normal sustenance of those He calls His Own.  Put another way, Healing [in all its manifestations] is our inheritance; our portion and our provision as children of the Most High; something we can claim as our birthright.
Yet, for far too many years, the Church has cast doubt and uncertainty and confusion about whether we have a right to expect healing.  And in regards to healing as it pertains to deliverance from demons, the Church hasn't even considered it might be necessary!  But as children of God, we need to be confident of the ground we stand on in the whole sphere of healing, and know the Truth of the Bible --- that Jesus is not only able to heal today, but is willing to, and waiting for us to act upon that Truth in faith!
The last thing I want to point out is that the Canaanite woman did not focus on just the healing she needed for her daughter.  Even when Jesus refused her at first, she did not abandon her belief in Him. She bowed down and worshipped Him, continuing to seek the Healer, even though the healing had been denied.  We must follow her example.  I cannot tell you that we will be successful every time in getting healing for ourselves, or in bestowing healing on others.  I do not know why healing is not automatically accomplished.  But I know that those who pursue it and don't quit eventually receive it. We are entitled to receive healing as a child of God.  It is our bread. It is our entitlement to receive it, and our privilege to give it.  Healing is evidence that the Kingdom of God is present. We have been commissioned to exercise this gift. And healing is one of the signs that is to accompany those who believe. Seek The Healer and He will answer!

Psalm 107:20   "He sent out His word and healed them, and delivered them from their destruction".
Posted by Pam Kohler at 7:00 AM