It has been interesting, from a social perspective, to see how those Americans who backed the losing political candidate for President have responded.  Mind you, this post is not meant to disparage political views or positions. We live in a country where everyone has an equal vote and no matter who you voted for, you have a right to your opinions. And let's face it, over the last 16 years in our political history, not everyone has been happy.  In fact, after each election, there has been approximately one-half of the country who have not been happy with the results. 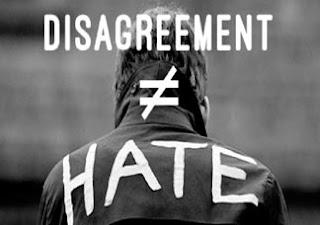 I am writing this post because of what I have observed among friends whom I like and respect; people who are successful in business, and caring and generous people.  But their dissatisfaction with our new President-Elect has turned them into people that I hardly recognize.  They are angry, and seem to be willing to color anyone who doesn't agree with them with a broad brush of negative attributes.  These are the same people who accepted you and your differences in a spirit of harmony and mutual respect -- as long as they perceived their social and political persuasions carried the dominant position.
That wouldn't bother me so much -- knowing that political dominance is never permanent, and the pendulum always swings back the other way -- except that the hostility and ire has now transitioned into a vocal criticism of my Christian beliefs.
A recent conversation started off innocently enough... comparing favorite Christmas movies of our youth. (Mine, by the way is It's A Wonderful Life -- you can't beat it for a good old-fashioned dose of sentimentality and a message of the importance of every man's life).  The conversation then evolved into the whole phenomenon of "ugly Christmas sweaters".  And one of our friends commented that one of the tackiest sweaters he had seen was a picture of Jesus, with "Birthday Boy" written underneath.
I agreed with the tastelessness of such a display and then opened the proverbial can of worms by remarking that our Lord's birthday is not even on December 25th. You could feel the tension in the room amp up. Thus began a discussion that went something like this...
"Well, you know that no one knows when he was born, right?"
I replied, "I agree, there is no exact historical document that states when His birthday is, but when the Bible says at His Birth, "there were shepherds staying out in the fields, keeping watch over their flock by night", it can be proven that this would not have happened in late December, because it is winter then, and the fields would be full of snow.  The shepherds would have brought their flocks in from the fields.  It is more likely that Jesus was born in the fall, perhaps September or early October, when the shepherds remained in the fields with the flocks".
This seemed to agitate our friends even more.  "You can't really go by what the Bible says; it is just a book of allegorical stories.  These are the same stories that have been told by other ancient peoples since the beginning of time.  The Bible has no supremacy in these stories".
By this time, I can sense that this conversation is growing more heated and I understood one thing clearly.  People who have rejected the truth of Jesus and the Bible will not be convinced by someone like me; someone who they clearly think is delusional and intellectually inferior.  They need concrete academic and scientific proof, and belief based on the absence of data, or without evidence -- in other words, FAITH -- is something they cannot logically conceive. But I wanted to make my position very clear.... "It comes down to if you believe the Bible is the inspired Word of God, or not.  I happen to believe it is."  And with that, my husband wisely steered the conversation to safer subjects.
But, as often happens, I think of things I wish I had said long after the encounter.  I should have pointed out that perhaps the reason so many of the ancient texts, such as the Sumerian, Annunaki, and Ugaritic texts, mimic the stories in the Bible, is perhaps because YHWH, the Most High God, tried to  reveal Himself to those peoples, but they rejected Him.  And it wasn't until Abraham answered His call, that a people were worthy to be set apart as His chosen. A good argument, but I know that those who refuse to hear His voice will not be swayed by any explanation I present.  Only the Holy Spirit can work in their hearts and turn them from their stubborn ways.
But it saddens me. As I said, I really like these people, and I have known they were unbelievers since our friendship began.  Our expressions of faith were always well-received and never an impediment. But I'm afraid the dynamics have changed with this new political season, and those of us with Faith are now inextricably tied to their dissatisfaction with the political climate. That's OK.  If it sets me apart from those who put their faith in men and politics, then I'm happy with that designation.  And if it gives me more opportunity to be a vocal defender of my faith, then so be it.  I'm thrilled to talk about my God and His Word!
In the end, this shouldn't surprise me -- or you, if you are experiencing the same kind of reaction. Our Lord told us we would be hated because of His Name. And, as His followers, we must endure and stand for Him, being promised our reward of salvation for all of eternity.  I can handle being sneered at and despised; I won't be discouraged nor deviate from my path. I just wish my friends could share my peace and my joy. And I would love for them to come along on this exhilarating journey!

Romans 13:11   "Do this, knowing that this is a critical time. It is already the hour for you to awaken from your sleep [of spiritual complacency]; for our salvation is nearer to us now than when we first believed [in Christ]".