Christian Witchcraft and the Modern Church

I know ... the title to this post seems like an oxymoron, right?  How can Witchcraft and the Church even be used in the same sentence?  The Bible is very clear on its prohibition of any kind of witchcraft, yet you might be surprised to find that there are plenty of people who identify themselves as both Witches and Christians.
Deuteronomy 18:10-12 says it plainly and explicitly:  There shall not be found among you anyone who burns his son or his daughter as an offering, anyone who practices divination or tells fortunes or interprets omens, or a sorcerer, or a charmer or a medium or a necromancer or one who inquires of the dead, for whoever does these things is an abomination to the Lord.
One thing needs to be perfectly understood by everyone, whether Christian or not:  There are only two sources of spiritual power: God and Satan. True, Satan has only the power that God allows him to have, but it is considerable. To seek spirituality, knowledge, or power apart from God is idolatry, which is closely related to witchcraft. And Witchcraft is Satan’s realm, and he excels in counterfeiting what God does. When Moses performed miracles before Pharaoh, the magicians did the same things through demonic power. 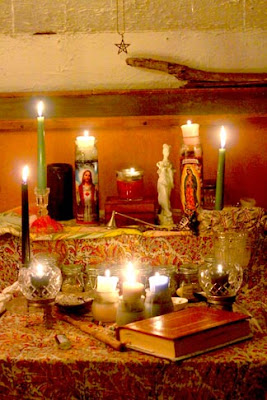 1 Samuel 15:23   "For rebellion is as the sin of divination,
and presumption is as iniquity and idolatry".

Email ThisBlogThis!Share to TwitterShare to FacebookShare to Pinterest
Labels: The Occult and Witchcraft