I'd like to spend this week in a true spirit of giving thanks.  We've just finished a hotly contested and divisive election season; the war in Iraq has been revitalized; world powers are readjusting and realigning, and it's too easy to get caught up in our anxieties and fears about the future.  But this week, let's concentrate on the stories that bring us together; our common humanity and the lessons we can learn from Biblical history. 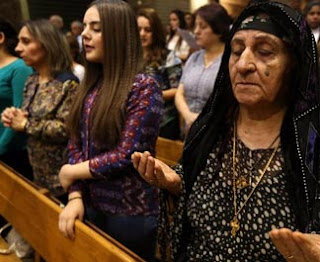 This first story comes to us from Erbil, Iraq. Last Friday, November 18th, more than 20,000 persecuted Christians gathered to pray for Iraq and victory against ISIS. The six-hour prayer event marked the end of 50 days of fasting, and for many Christians, hopefully the start of a new life without ISIS. Think about that! In this country that has been torn apart by war for more than thirteen years, this is a remarkable show of faith in the wake of some of the most horrific and wicked persecution the world has ever seen.
Those that gathered were specific in what they wanted to accomplish.  They prayed for the presence of God’s Spirit to envelop the meeting and that every person would clearly hear what God wanted to say to them.  They prayed that leaders of the event would preach, worship and pray under the anointing of the Holy Spirit.  They prayed that those who were Unbelievers would be touched by the Holy Spirit during this time, and come to know His Truth, as Son of God and Lord of all. They prayed that this gathering would be a time of encouragement to those who were struggling to stay steadfast in their faith because of the persecution they had suffered; and a time of breakthrough for those struggling to know Jesus for the first time.  Finally, they prayed that God would indeed hear from Heaven, answer the cries of His people, and bring healing, renewed hope for the future and peace to the people of this region. It is an ancient prayer that people of the Bible have prayed since Genesis.
While Iraqis are hopeful that the defeat of Isis and the liberation of their towns will continue, they still face violence by local militias, regional conflicts between key players like Turkey, Iran, and Saudi Arabia, as well as the distrust between the different religious and ethnic groups of the Sunnis, Shias, Kurds, and Arabs.  It is the same old world story, but at the heart of it is the continued power of prayer and the hope of God's promises.  I am thankful for this current reminder that God is still sought after as the ultimate answer to the world's chaos.
This second story has an ancient Biblical connection.  Remember the story in Acts, Chapter 8, when Philip, the Evangelist, encounters the Ethiopian eunuch on his way back from Jerusalem?  Philip overhears the Ethiopian reading the Book of Isaiah; specifically, Chapter 53 [which identifies our Lord as the Suffering Servant], and offers to help the traveling eunuch understand what he is reading. First, we need to understand that it is nearly 1600 miles from modern Ethiopia to Jerusalem!!! This man traveled a long way to gain knowledge, and how did he come to be seeking wisdom about the coming Messiah?
Well, scholars speculate that Ethiopia was the land where the Queen of Sheba had come from, who saw the glory of Solomon’s kingdom and professed faith in the God of Israel (1 Kings 10:13). It’s possible that pieces of the Jewish faith were passed on through the centuries to men like this servant of the current Queen. And after Philip's instruction, and his confession of faith and baptism, this Ethiopian eunuch most likely returned to his homeland and helped launch the Christian faith in that ancient land. Here's an additional interesting note: The Coptic Christians – greatly persecuted today in Egypt – trace their spiritual heritage back to this Ethiopian official.  So, what does all this history have to do with giving thanks this week? 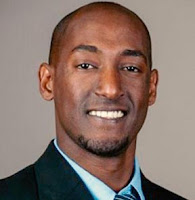 Daniel Sahalo is some of the fruit that was borne from that divine appointment between Philip and the Ethiopian. He was born in the farming village of Gaina, Ethiopia. In 1984, when Daniel was 4 years old, his family decided to immigrate to Israel, along with a group of other Jews seeking to flee the famine and political unrest in Ethiopia. For eight weeks, Sahalo and the rest of his group traveled barefoot at night under the eclipse of darkness. They contended with many threats, including robbers, hunger, wild animals, and the bitter cold of the desert nights. Sadly, more than 4,000 members of the Ethiopian Jewish community died on the way to Israel, including Sahalo's 23-year-old sister and 2-year-old niece.
After waiting nine months at a Red Cross refugee camp near the Sudanese and Egyptian border, the announcement finally came that the group would be flown to Israel. Sahalo would go on to finish high school, enlist in the Israel Defense Forces' (IDF) prestigious Paratroopers 101 battalion, and become the only member of his family to earn an academic degree [in International Relations and Latin American Studies at the Hebrew University in Jerusalem].
But perhaps his most important accomplishment has become his involvement with the Megemeria Jewelry Collection, as their Sales and Marketing Manager.  You see, the experience of Ethiopian Jews in their new homeland of Israel has o theften been a difficult one.  Most Ethiopian Jews were farmers in their native country and now have trouble finding work and integrating into Israeli society. That's where Yvel comes in; they are a company in Israel that makes and sells fine jewelry.  Founded by Argentinian immigrants to Israel, they started a social business enterprise, called the Megemeria School of Jewelry and the Arts. "Megemeria" means Genesis in Amharic, the native language of Ethiopia. 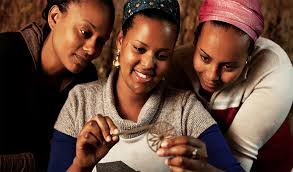 The school teaches Ethiopian immigrants to Israel the art and science of jewelry design and manufacturing, along with many other skills, such as math and the Hebrew language. Students study for free, receive a monthly stipend to help with living expenses, and upon graduation from the school, many are hired to work at the Megemeria social business. All jewelry is designed and manufactured entirely by the school's students and graduates, with all sales revenue reinvested in the project. What a beautiful Biblical picture of how God instructed the Israelites to love the "sojourners" and "aliens" in their land, remembering that they were once sojourners themselves.  It also shows the respect of the new citizens of Israel by learning the native language and becoming productive citizens.  This story of Aliya (the immigration of Jews from the diaspora to the Land of Israel) turned from one of struggle to one of thanksgiving.
In these two stories, we see the history of humanity.  They encompass the stories of refugees, asylum-seekers, the internally displaced, and those moving to other countries as immigrants. They cover the reality of being human as well as being a Christian or a Jew. They remind us that we are all made in the image of God.  We are all representatives of God on earth, and we all have worth in His eyes; each of us was made by God and Christ died for us.
In this age of war, global politics, and Elitist domination, it is sometimes hard to imagine that God cares about each individual.  But from the beginning of the human race, nothing has changed. Just as God "saw" Abram in Mesopotamia; Ruth in the land of Moab; Daniel in Babylon; and each of the Disciples in their lonely journeys to Asia Minor, India, North Africa, Persia, and beyond, He "sees" each of us. He hears each prayer, as in Erbil, Iraq; and like the Ethiopian Jews, He desires that each person seeking a better life in a strange land would be welcomed, and charity and compassion be dispensed.  The stories presented here mirror these Biblical principles, and are the perfect way to begin our Thanksgiving week.

Thank you to the Christian Broadcasting Network for reporting on these two inspirational stories.

Psalm 103:13   Just as a father loves his children, So the Lord loves those who fear and worship Him [with awe-filled respect and deepest reverence].