For some, the Thanksgiving holiday is all about the food.  For others it is all about family; reminiscing about old memories and creating new ones.  But it is also about inspiration and gratitude. But if you watched CBS Sunday Morning last weekend, you saw a story that combines the best of all these aspects.

Chef Ryan Hidinger was well known in Atlanta, having worked at some of the premier restaurants in the area. In addition, he and his wife, Jen, had gained quite a reputation for their unique supper club, called Staplehouse.  They ran it for several years, in anticipation of opening their own restaurant with the same name.
Then out of left field, Ryan received a devastating Gallbladder Cancer diagnosis.  Doctors told him it was stage-four and he was given six months to live.  Needless to say, their dream of opening a restaurant suddenly seemed out of reach.  But friends, those within the Atlanta area, and the restaurant industry came together and held a charity gala that raised $275,000.  That money not only paid the Hidinger's medical bills, but became the seed money for The Giving Kitchen.
The Giving Kitchen was formed as a 501(c)(3) to fill the need for a crisis grant program in the restaurant community — as a way to do for others what the community came together to do for Ryan and Jen.  The organization provides emergency assistance grants to cover basic living expenses, care-related travel expenses, and funeral expenses for those who meet defined criteria; to families of chefs, restaurant owners, servers and restaurant staff. The Hidinger's research showed that there are over 200,000 restaurant workers in the City of Atlanta. At any given time, 1-2% are facing unanticipated crisis. The Giving Kitchen is committed to trying to meet as many of those needs as they can.

The idea for the Giving Kitchen originated with the compassion shown the Hidinger's during Ryan's illness.  In the business world, it models a unique hybrid structure as a nonprofit with a for-profit subsidiary. The for-profit subsidiary is Ryan and Jen's original dream, Staplehouse — the casual fine- dining restaurant they opened in a turn-of-the century brick building in Atlanta’s Old Fourth Ward. After all the bills are paid, the staff is paid, taxes are paid, etc., 100% of Staplehouse’s net profits are channeled back into its nonprofit parent, The Giving Kitchen, as an ongoing stream of support.
The testimonials on the website are proof that The Giving Kitchen is meeting the needs of those in the restaurant industry.  Bartenders, servers, and families of restaurant workers who are enduring the anxiety of unexpected medical crises and bills become recipients of Funds set up in their names, and supported by restaurant patrons, other restaurant employees, and profits from Staplehouse -- all donated in the spirit of assisting others who need a helping hand.
This is a unique story and so appropriate for this Thanksgiving season.  The CBS presentation didn't reveal whether Faith played any part in the Hidinger's decision to start The Giving Kitchen.  But their motivations are certainly pleasing to God.  For He tells us to share generously with those in need, and to help those in trouble.  He tells us our giving should be motivated by a sincere desire to help others, and that is evident in Ryan and Jen's story.  Ryan died from Gallbladder Cancer in January of 2014.  Since that time, Jen, along with Ryan's sister, Kara, and her husband, Ryan Smith (who now serves as Staplehouse chef), have labored with love to keep Ryan Hidinger's memory and dream alive. 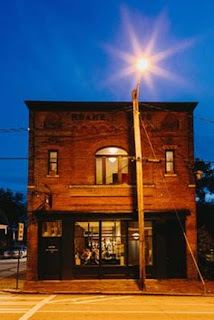 While Staplehouse has been a project of passion since the beginning, it has become a lasting testament to Ryan and Jen's desire to not only give back to the community who helped them, but to pay it forward.  As the website bon appétit proclaimed, "Staplehouse is about love, and it is about family. It is inspiring, and it is humbling. Staplehouse is an example of what good a community can do. This is why [we named] Staplehouse as the Best New Restaurant in America".  And from the reviews I've read, they did not receive the award out of sympathy -- the service is outstanding, there is a palpable spirit of joy and love, and the restaurant's food is leading the pack towards the next step in modern Southern cooking.
But it is the quote from Ryan Hidinger, himself; written on an exposed wooden beam, that sums up the intrinsic nature of this story ... “Anything long-lasting or worthwhile takes time and complete surrender.” That speaks to my experience as a human being and as a Christian.  I think we can say that The Giving Kitchen exemplifies the spirit of Thanksgiving with its story of love and family and giving to others.  And perhaps, most of all, it shows us how to live out Jesus's command to love our neighbor as ourselves. May it continue to prosper and be blessed.

Luke 6:38   "Give, and it will be given to you. Good measure, pressed down, shaken together, running over, will be put into your lap. For with the measure you use it will be measured back to you."
Posted by Pam Kohler at 7:00 AM