Let's face reality.  To many people, our smartphones, our iPads, Twitter, and microchips have become this world's gods.  We bow down to technology in our culture, and we have lost sight of the One who created us.  We trust in ourselves and our digital false identities and no longer trust that there is a Higher Being who will one day judge us.  Instead, we judge ourselves against what technology tells us we should be, and become self-proclaimed deities, as prescribed by every advertisement that appears on that touchscreen.
The question becomes, Is there room for spirituality in that virtual world?  Now, I understand that the word "spirituality" covers a broad spectrum of understanding, but for the purpose of this blog post, I wish to proceed on the premise that it means a belief in something bigger than ourselves; in my case, a connection and relationship with the One True God and His Son, my Savior.  To others, I understand that it might be nothing more than a search for the meaning of one's life; a search that looks to a higher power for guidance and direction.  In either case, spirituality points to a belief system that places emphasis on relating to, or affecting the human spirit or soul.
Since technology governs our world, it only seems natural that it will progress to the point that it governs our lives -- even beyond what it does now.  Technology is trending towards extending and governing our lifespans, surpassing the biological limitations of our existence.  In other words, technology may soon convince us that we can be more than what we are (made in the image of God).  But wouldn't that eliminate any "spiritual relationship" I might have with the One who created me, Jesus? 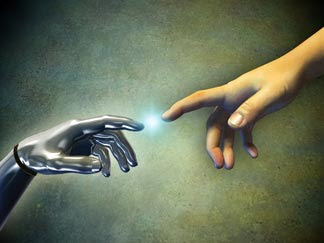 Not necessarily, says Max More, the British philosopher, who is largely credited with articulating the principles of transhumanism as a futurist philosophy in 1990.  So we are all on the same page, let's agree with the Wikipedia definition of transhumanism, which is "an international and intellectual movement that aims to transform the human condition by developing and making widely available sophisticated technologies to greatly enhance human intellectual, physical, and psychological capacities.  The most common transhumanist thesis is that human beings may eventually be able to transform themselves into different beings with abilities so greatly expanded from the natural condition as to merit the label of posthuman beings."  In simpler terms, transhumanism encourages the use of artificial enhancements to push mankind towards something “more than” human.  What do you think God thinks about that???
Well, I can tell you that Max More, and other transhumanists like him, think they can keep all the benefits of religion, do away with some of its drawbacks, and leave out the supernatural.  (I would assume that some of the "drawbacks" would include that part about "Jesus is the only way to eternal life).  But here's the thing... all humanists, whether they are "trans" or "modern" or "philosophical" always use Reason as their foundation.  They cannot comprehend that God is real, because they have no reasonable or rational proof.  Therefore, they diminish our faith to a simplistic idea that "This world is kind of grimy, and unpleasant and nasty, and it’s really something we should just wait to get past, and get to the real, nice place, which is heaven."
They see no value in putting our hope in the Lord and renewing our strength, or fixing our eyes on what is unseen and eternal.  They believe that we should work on improving what is temporary and seen.  Listen to how Max More describes the transhumanist philosophy:  "Transhumanism can be a way of looking beyond our meat bodies, and the particular form we have, recognizing our relationships with other species, different possibilities for our cells; and realizing that, what color our skin is, or where we come from, or what our religious beliefs are, isn’t really that important.  By acknowledging our fundamental, natural limitations, and looking beyond ourselves for ways to overcome these limitations, transhumanists pursue enlightenment ... It’d be nice if we could overcome [those limitations] by reprogramming our genes. Carefully, because there are reasons why that evolved. But conditions have changed."  Oh yeah?  Who are you, or any human for that matter, to suggest that what God created needs to be changed?
What's more, this philosopher dares to suggest that he has found "spirituality" in the future of transhumanist efforts.  He gets "a sense of meaning in life, a sense of purpose, and a different way of looking at things that I think is actually quite fulfilling and inspiring" ... far more [he thinks] than those who believe in a God with ridiculous, arbitrary rules. 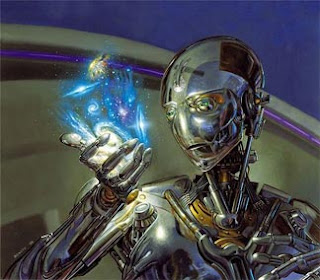 But at the core of transhumanism is the belief that mankind needs biological improvements, or an upgrade, if you will.  Take for example, Zoltan Istvan, an actual third-party presidential candidate who travels across the country in a coffin-shaped bus campaigning for infinite life extension, and Neil Harbisson, a colorblind “cyborg activist,” who has a device implanted into his skull that allows him to hear color.  They may be on the fringe of the transhumanist movement, but they are actually beginning to form alliances with groups like the Christian Transhumanist Association, who describe their purpose as "participating with God in the redemption, reconciliation, and renewal of the world".
But here is what you need to understand: They believe that "God’s mission involves the transformation and renewal of creation, including humanity, and that we are called by Christ to participate in that mission: working against illness, hunger, oppression, injustice, and death."  They take the Scripture, Love the Lord your God with all your heart, soul, mind, and strength…and love your neighbor as yourself, and distort it.  They say that when it comes to the application of those commands, they see three deep things: 1) They focus on that which is transcendent.  2) They pursue greater coherence of mentality, physicality, spirituality.  3) They seek the betterment of the world.  They will tell you that these vague concepts are at the heart of Jesus's Gospel.
Listen to Micah Redding, executive director of the Christian Transhumanist Association:  "We wear glasses, we wear contacts, we get heart implants, we get dental implants, all of these things have been going on for generations, and none of these technologies have ever been considered to be at odds with Christianity. Why, then, should we treat smart blood — which promises to improve our physiological abilities — or a computer chip — which could improve our intelligence — any differently?"  Furthermore, Redding argues that extending life is a Biblical mandate, commanded by the call to imitate a God that believes life is good. “Just as God creates and cultivates life, he wants us to create and cultivate life,” Redding says.
And they all want us to believe that this equals spirituality.  It's just another example in a long line of Satan's deceptions.  See how easily the devil gets mankind to switch from the concept of being made in the image of God, to thinking we can be like God?  That is the same lie he has told since the Garden of Eden!  His methods have varied, but the message has always been the same; and the latest "apple" he is dangling before our eyes is enhanced humanity; the road to overcoming our biological limitations and a way to gain eternal life ... and all without acknowledging the saving power and grace of Jesus Christ.
Yes, get ready to start seeing the promotions for "spiritual and biological enhancement".   Get ready to be sold the lie that we can be God-fearing and longevity-embracing, all at the same time.  I will leave you with these prophetic words from Max More, the self-identified Father of Transhumanism:  "[Spirituality] can really just mean your highest values, deepest motivations, your big worldview.  And in that sense, I think you can definitely have a transhumanist spirituality."  The word chilling does not begin to describe how I feel about that statement.

Job 38:2    "Who is this that darkens counsel [questioning My authority and wisdom] by words without knowledge?"